Average real-term pay in Britain declined at among the fastest rates for more than 20 years at the end of last year, as public sector pay deals continue to trail behind the private sector during the cost of living crisis.

The Office for National Statistics said wages in real terms fell by 2.6% in the three months to November, among the biggest falls in growth since comparable records started in 2001.

Without adjusting for inflation, the annual rise in regular pay for all workers, not including bonuses, shored up to 6.4% over the period. It was the fastest rise since 2001 – excluding the pandemic, when official pay figures were distorted by the furlough scheme – but still much below the current headline inflation rate in the UK of 10.7%.

Wage growth in the private sector, before adjusting for inflation, hit 7.2%, as wages in the public sector continued to fall greatly behind with a growth rate of 3.3%. The figures come as the government is under increased pressure to raise public sector pay amid rolling disputes, after teachers in Wales and England voted to strike and nurses plan to take further action. 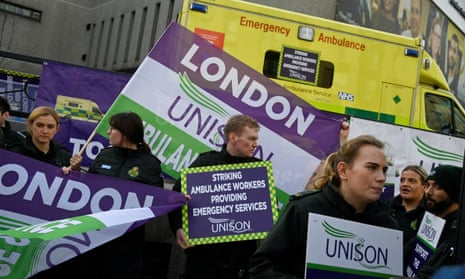 Nearly half a million working days were lost in November, the greatest level since November 2011, as railway workers and Royal Mail postal operatives staged a walkout. The ONS said the number of days lost to strikes since June was the highest in over three decades.

Jonathan Ashworth, the shadow work and pensions secretary, said the figures indicated the government was “bereft of ideas” for addressing the cost of living crisis and supporting people to work.

“Real wages are plummeting, almost two and a half million people are out of work because of sickness and far too many people – especially the over-50s – aren’t getting the support they need to either stay in work or to go back to work.”

Inflation reduced from a 41-year high of 11.1% in October to 10.7% the next month as households faced pressure from surging energy bills and the rising cost of weekly shopping. Official figures expected on Wednesday are likely to show another modest fall to 10.6%, still substantially higher than average wage growth and well above the Bank of England’s 2% goal.

The chancellor, Jeremy Hunt, said the best way to help workers’ pay advance was to “stick to our plan to halve inflation this year”.

“We must not do anything that risks permanently embedding high prices into our economy, which will only prolong the pain for everyone,” he said.

Unemployment remained at 3.7%, near the lowest level in almost five decades. Job vacancies declined for a sixth successive quarter, but the number of vacancies remained at historically high levels at more than 1.1m.

Economists said the increase in pay growth, before adjusting for inflation, was likely to mount pressure on the Bank of England to hike interest rates at its next meeting in early February as the central bank responds to the rising cost of living.

Threadneedle Street has said signs of stronger wage growth and a tight labour market could stoke persistently higher rates of inflation. The Bank has hiked interest rates nine successive times, to 3.5%, with City economists predicting additional hikes despite pressure on the economy.

“We still think the labour market will loosen eventually. But the fact that the labour market remained tight and wage growth remained strong, combined with the economy proving to be more resilient than expected in November, will only increase the Bank of England’s fears that inflation, despite falling, is still persistent.”