The steep fall in Japan’s currency (yen) has continued so far and fast it’s causing panic among big investors, and some are reducing bets that it will deteriorate further, expecting policymakers may soon intervene to try and curb the freefall. 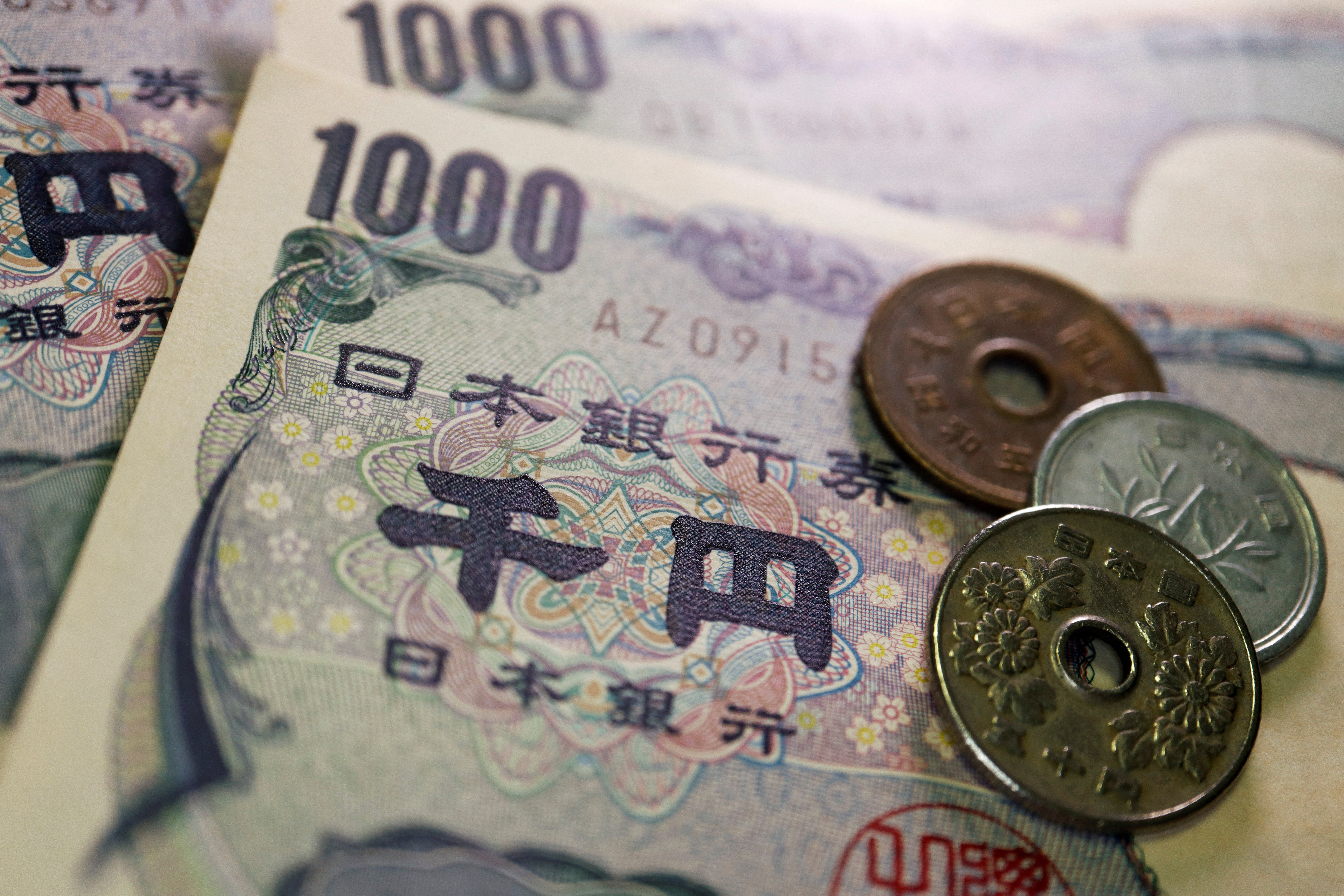 Those who have sold the yen short have realized substantial profits this year.  It plunged to a 24-year low on Wednesday and has shed some 30% since the start of 2021 as U.S. interest rate projections have climbed and Japanese rates have gone nowhere.

But this week’s almost 3% fall, without any specific trigger, was enough for some funds to stop the first leg of their wager that Japan would have to drop its policy of capping bond yields as its global peers hike rates. On Thursday the yen was at 143.40 per dollar, up marginally but not far from its lows.

“We think we are getting close to an inflection point of policy,” said BlueBay Asset Management chief investment officer Mark Dowding, especially as inflation begins to soar.

He stated, while pointing to the government bond market:

“We have maintained a short stance in JGBs as an expression of this and today have actually moved long yen. We think the slide in the yen has gone too far too fast and we think that we will hear something from policymakers pretty soon.”

Uneasy calm in the market after a two-session selling storm indicates the feeling is perhaps more prevalent, or at least that yen shorts are cautious of increasing their positions.

“We’re just breathing and watching – whenever we see the right indicators, we will take some action.”

Government officials have been reinforcing verbal threats of intervention and sent out their strongest warning to date on Thursday. Without action, however, the yen was left unguarded at almost 144 to the dollar.

“The big 1998 dollar/yen high at 147.66 … is the natural target,” said Deutsche Bank strategist Alan Ruskin, adding intervention risks would grow as it approached. “It would not be surprising to see substantial yen longs set up on its approach.” 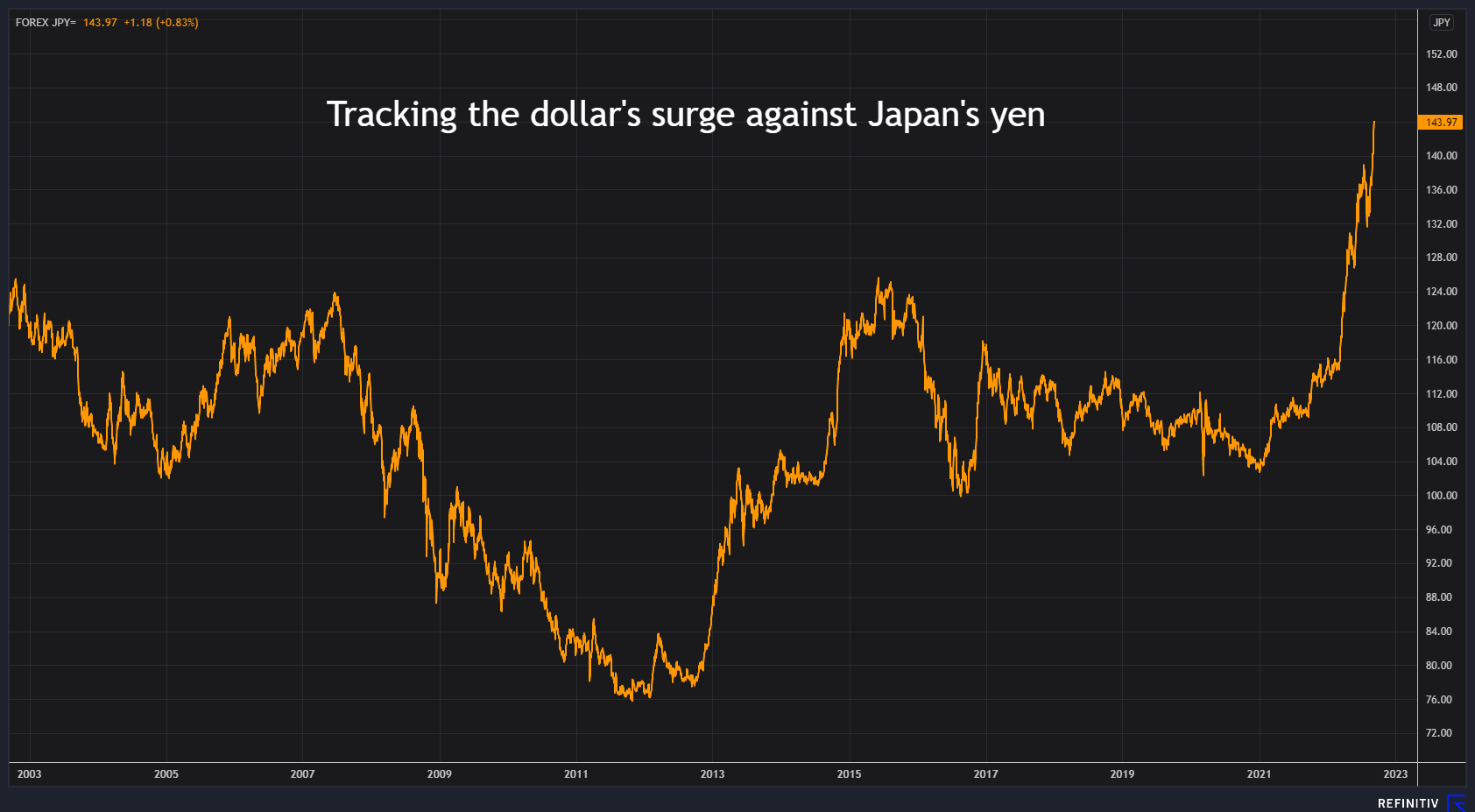 The yen has not been on its own in sliding lately as the U.S. dollar has shot to multi-decade highs on the sterling and euro on a combination of interest rate projections and risk aversion. But it has deteriorated most because Japan is alone among big economies in imposing near-zero interest rates while the rest of the world scrambles to raise them to curb inflation.

After years of significant asset buying failed to drive inflation to its 2% target, the Bank of Japan implemented yield curve control in 2016, where it guides short-term interest rates at -0.1% and the 10-year bond yield around 0%.

This has moved cash from Japan to higher-yielding investments overseas and it has lured funds such as BlueBay who’ve predicted the policy won’t last – leaving the market exposed to a harsh response if there were a policy change.

“There would be a very sharp reaction to the policy response from BOJ,” said Ed Al-Hussainy, Senior Currency and Rates Analyst at Columbia Threadneedle.

“A lot of those momentum traders will step back and say ‘This is a very crowded view and if the Bank of Japan is fighting it, we don’t want to stick around.'”

Thus far, apart from talking up the currency, the BOJ has given no signal it is considering a shift. Hiroshi Watanabe former top currency diplomat told Reuters intervention would be unsuccessful at offsetting dollar gains.

Analysts say that stock market inflows are unexpected while so much turmoil whirls around rate setting, but market participants say there are hints that outflows are faltering, after intensive selling last week.

“There are signs the selling may be abating,” said Dan Izzo the CEO of market-making firm GHCO. “Institutional flows on ETFs are progressively moving to better to buy in developed market ex-U.S. products.”

And for the currency, there’s always a risk.

“The U.S. dollar will not rise forever,” said Akira Takei, global fixed income fund manager at Asset Management One in Tokyo. “That is too good to be true.”