— this post authored by David Eastwood, University of Birmingham

Two years ago, a Trump presidency and a vote for Brexit were considered all but unthinkable. Now, two of the world’s oldest democracies are struggling to live with them, and their struggles are even more profound than they seem.

The depth of these crises is masked by what might be termed “mere politics”: beneath the dissonance of day-to-day politicking, the constitutions of two representative democracies are being fundamentally challenged.

Americans talk much, but understand less, about their “Founding Fathers”. The US’s constitutional settlement was essentially forged between 1776 and 1794, and it envisaged a very different political culture from that which now prevails. Its points of reference were classical, senatorial, discursive, and balanced. At its core was a simple premise: with the right people debating the right issues in the right way, checked by a constitution that balanced the executive, legislative, and judicial branches of government, the Founding Fathers believed they would create a virtuous Republic.

It is reported that Trump might not have read all the articles of the constitution, still less its 27 amendments (though he ominously invoked the second – the right to keep and bear arms – on the campaign trail). No matter, because America is trying to accommodate itself to a style of government quite different from that envisioned by the Founding Fathers and enshrined in the constitution and its processes.

Government now is government by opinion – opinion expressed not in the glorious prose of the Founding Fathers’ Federalist Papers, but in the peremptory and explosive sub-prose of tweets. It is the politics of expostulation, not consideration.

Given the White House’s well chronicled and sometimes almost comical dysfunction, not to mention the constant drip of allegations that might have sunk presidencies past, one wonders how this presidential vessel is still afloat. What’s protected Trump so far is a curious elision of a new mode of politics and a venerable political structure. 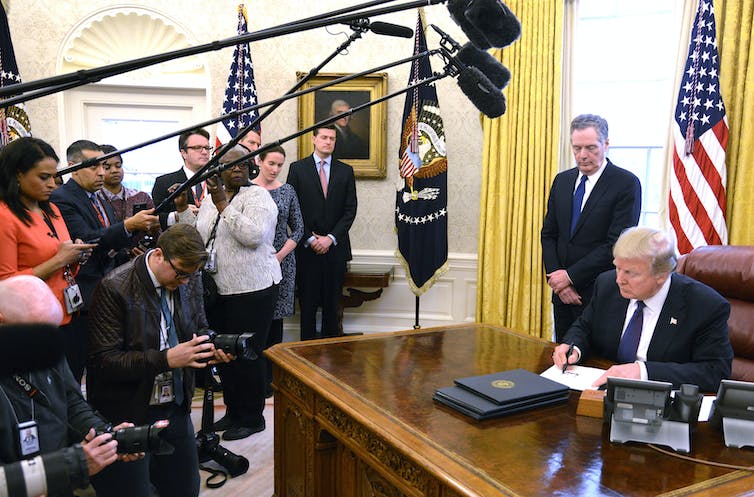 The checks and balances of the US constitution that were designed to prevent the abuse of power now themselves check one another. With the same party controlling Congress and the White House – and nominating justices to the Supreme Court – the wheels of the constitutional machine turn slowly. All the while, the judicial wing of the constitutional machinery is playing its part too via Robert Mueller’s investigation into the Trump team’s Russian ties, steadily accumulating evidence, cutting deals, and selectively releasing information into the public domain. Even with Trump yet to be interviewed for the inquiry, much of what’s already come out would have been much more immediately and more obviously fatal to presidencies past.

Here Trump is protected by both prosecutorial protocols and the disabling pluralism of social media. The reality is that everyone can now pick and choose their own news. Whereas the fallout from Watergate was a classic example of the “fourth estate” forcing accountability to a public opinion that it helped to shape, the new world of social media means presidential tweets can deflect, dispute, and flagrantly deny to remarkable effect.

Since the Reformation, broadly speaking, Britain’s parliament has been sovereign. Over time, that sovereignty of parliament has been contested, and in recent years has been eroded. The challenge to parliament’s authority has come not from popular protest, but from the rise of the Executive and the onward march of judicial review. Nevertheless, until the Brexit vote, the broad parameters of the constitution – as described by Walter Bagehot in the 1860s – have prevailed.

The result of the Brexit referendum shattered that constitutional settlement. Referenda have of course happened before, but from the 1975 referendum onward, the results have always aligned with what might be termed “the will of parliament” – in short, had they been voted on in parliament, the result would have been same. That is why the crisis precipitated by the 2016 Brexit referendum is so profound.

The electorate chose – albeit narrowly – a course of action opposed by all the major parties and a large majority of MPs. It seems David Cameron’s decision to use a non-parliamentary means (a referendum) to solve a parliamentary problem (a divided Conservative party) unwittingly created a new kind of politics, where a single issue – and not necessarily the one voters care most about – brought down a prime minister and realigned politics around a policy that the majority of MPs opposed during the referendum campaign. 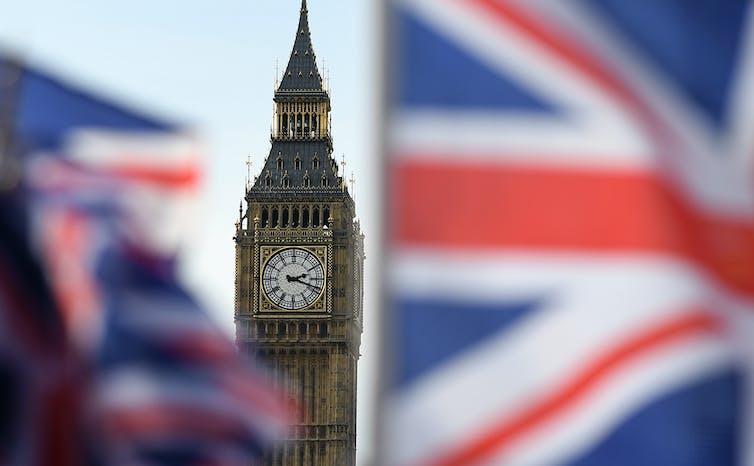 The times, they are a-changin’. EPA/Andy Rain

Normal politics is on hold, and will remain on hold until Brexit is determined. Much of the Brexit process involves a further extension of executive power, only recently and weakly checked by parliament. What remains unclear is when and whether normal parliamentary politics will be resumed. Both major parties have become more beholden to their more extreme wings; the much-vaunted “centre ground” of politics is depopulated, and the machinery of government is overheating as it struggles to shape a Brexit deal and plan for a future outside the EU.

But deeper than that, it’s time to seriously consider the possibility that the UK nor the US will never return to their old constitutional equilibria. Both now have to adapt to a more sharply divided politics, a populism that finds its expression in social media rather than formal political action, and a style of leadership where old assumptions about collective or cabinet responsibility have given way to immediate and public dissent. Political trust, a hard earned currency at the best of times, is now dangerously devalued.

It may yet be that the US’s legislature, judiciary and traditional media will present a public indictment of Donald Trump so severe that he leaves office. It may yet be that Theresa May can unite the country and parliament around a consensual Brexit deal. But more likely, for better or worse, the strange forces at work will continue to erode the foundations on which British and American politics are built.