– this post authored by Sabine Jacques, University of East Anglia

The Shape of Water is currently leading the Oscar nominations with no less than 13 Oscars, including Best Original Screenplay – so accusations that its plot was stolen from Pulitzer-winning playwright Paul Zindel could not come at a worse time.

In 1969, Zindel wrote a play, Let Me Hear You Whisper, about a female janitor working in a secret government-owned laboratory in the 1960s who eventually attempts to rescue a sea creature from being killed after the creature’s refusal to cooperate with the researchers. Fast forward to 2017 and Shape of Water also takes place in the 1960s, features an introverted female character working as a janitor in a research lab and revolves around saving a sea creature about to be killed due to lack of cooperation during lab experiments.

According to the film’s director, Guillermo del Toro, on the website Written By, the idea of creating a movie about a “janitor that kidnaps an amphibian-man from a secret government facility” came from working with associate producer Daniel Kraus, who said he had been toying with the idea for some time.

Zindel died in 2003 and it is not yet clear whether his estate intends to pursue the issue in the courts.

Ideas remain free for all to use as only the expression of ideas can be protected under copyright law. As reported, there is actually a third short film based on similar ideas, The Space Between Us made in 2015. Therefore, provided that Zindel’s play is still protected under copyright, there is a need to dissect the two works further to look for all the similarities and establish whether what has been copied amounts to reproducing the same expression of ideas and not just common themes.

Not all works created prior to 1978 are protected under US copyright law. Typically, works published before 1978 receive 95 years of protection if published with a copyright notice. As the US copyright office register features a copyright notice for Let Me Hear You Whisper, we will assume that copyright subsists in Zindel’s work. Proving Zindel’s valid copyright in the play would be the first step towards establishing infringement.

The second step requires Zindel’s estate to prove that del Toro has copied original elements of Let Me Hear You Whisper in Shape of Water. This is the crux of a copyright infringement dispute, as there are no clear lines separating a protectable expression from a non-protectable idea in a work of fiction. Here, the words of Judge Learned Hand in Nichols v Universal Pictures Corp in November 1930 resonate:

Upon any work, and especially upon a play, a great number of patterns of increasing generality will fit equally well, as more and more of the incident is left out. The last may perhaps be no more than the most general statement of what the play is about, and at time might consist only of its title; but there is a point in this series of abstractions where they are no longer protected, since otherwise the playwright could prevent the use of his ideas, to which, apart from their expression, his property is never extended. 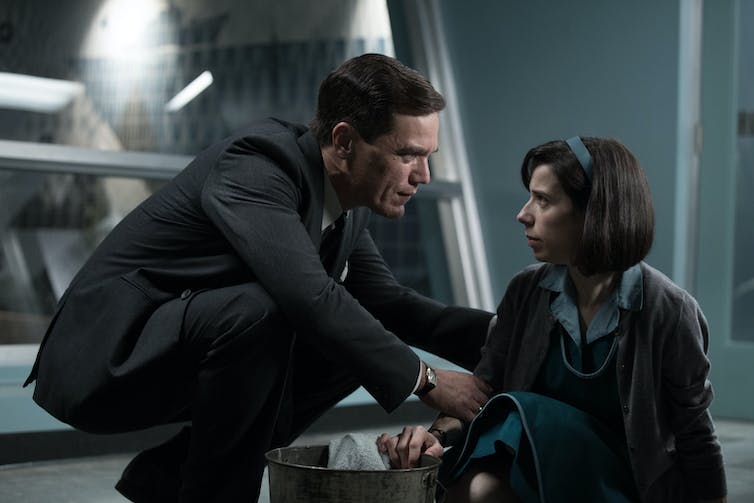 Elisa Esposito in The Shape of Water. Fox Searchlight

Some scenes will bear similarities with the earlier copyright-protected work because they derive from a similar idea, in which case they are not protected under copyright. However, the more complex the characters and dialogues become, the more likely these are to be protected under copyright. If this case went to court, judges will undertake a thorough comparison between the two works to establish if del Toro copied any elements of the play and, if so, whether he copied more than the unprotected scenes.

On the one hand, Shape of Water arguably appropriates numerous characters (the janitor, scientists and creature), settings (mainly the lab) and plot twists (including fleeing with the creature in a laundry cart) from the original play. But on the other hand, some major differences have been reported – such as the muteness of the main character in the film (the character in the play is not mute) – and the endings of the two works.

Whether a court would be convinced that the seemingly striking similarities in the characters and their interactions with the similarities in settings and plot will be enough to establish that Shape of Water exploits Zindel’s play as the basis for a new story, is impossible to predict.

According to Fox Searchlight’s spokesperson: “Guillermo del Toro has never read nor seen Mr Zindel’s play in any form.” Could this help del Toro? The principle of independent creation means that a defendant can deny copying elements from the original and maintain that the substantial similarities between the two works are purely coincidental.

But in case of court action, del Toro will have to demonstrate as a defence that he created the Shape of Water independently of the play by Zindel. This defence succeeded for ABC in a similar case in relation to the TV show Lost, in which the plaintiff, Anthony Spinner – a television producer, writer, and former studio executive in Los Angeles – wrote a 121-page script for a pilot which bore striking similarities with the series eventually made without his participation.

The court held that ABC had “negated the plaintiff’s claims by providing sufficient evidence to establish both that it did not have access to plaintiff’s original 1977 script and that the script for Lost was created independently“.

Similarly, del Toro’s argument would eventually hinge upon well-documented records of the creative process behind the script.

Zindel’s widow, Bonnie Zindel, has said that the play held a “special place in Paul heart” – and moral rights exist to protect the special bond between an author and his creation. And the US has been criticised for lacking adequate protection of moral rights. The general approach seems to be that an author has no right to guarantee his association with the work created if he has waived his right or if he has transferred his rights without expressively requiring to be credited in subsequent uses.

Should this case make its way in front of US courts – and should del Toro be found to infringe Zindel’s work – del Toro can still rely on the independent creation defence to justify coincidental similarities. Yet, as Zindel’s estate manifest is more concerned about the lack of acknowledgement of inspiration, perhaps this case represents another pledge for a reform of moral rights which would finally bring the US into line with much of the rest of the world – Europe (especially in France), for example – where moral rights are given greater weight.