Economics Needs More Than A Reformation

I was looking forward to 2017 as the tenth anniversary of an event that mainstream “Neoclassical” economists said couldn’t happen: the global financial crisis than began in 2007. A decimal anniversary is always a chance to reflect on the past, but it turned out that the reflection on that event by the economics profession and the financial press was minimal: it was an event they’d rather forget than commemorate.

There was only trivial coverage of the anniversary in the mainstream media. The UK media could have made a big song and dance of the tenth anniversary of the collapse of Northern Rock on September 14th, since it was the first bank run in the UK in 150 years. But there were only a couple of light articles in the Financial Times (“In charts: UK banking ten years after Northern Rock“; “Ten years after Northern Rock: has UK banking changed?“) a fluff piece by BBC TV – in which I was interviewed, but not understood (“BBC Business Live interview on 10th anniversary of Northern Rock“) – and a smattering of coverage elsewhere.

So, just as it was only the rebel economists like me who saw the crisis coming, it was only the rebels who really commemorated it. One way we did was by latching on to another anniversary in 2017: it was 500 years since Martin Luther triggered The Reformation by nailing his 95 Thesesto the door of the All Saints Church in Wittenberg. Rather late in the year, some students suggested using this anniversary as a hook to call for a Reformation of Economics.

I gladly took part in it, dressing up in a monk’s robe, speaking briefly (along with The Guardian’s Larry Elliott, and the prominent heterodox economists Vicki Chick, Mariana Mazzucato and Kate Raworth), and then blue-tacking a hastily and committee-drafted 33 Theses to the entrance to the London School of Economics. 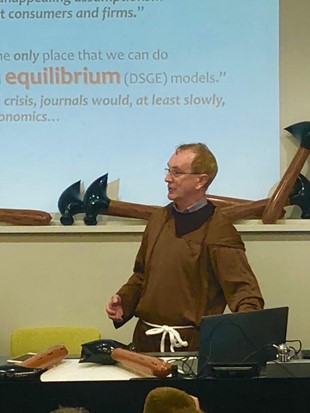 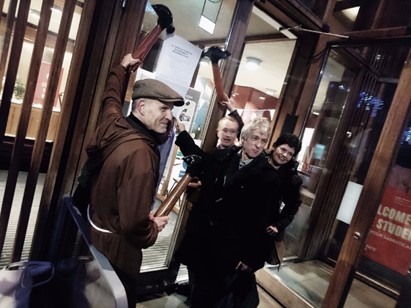 That event has garnered more critical reaction from mainstream economists than the tenth anniversary of the crisis itself, including Ben Chu’s recent piece in The Independent stating that “The economics profession does not need a ‘reformation“.

I’m going to surprise Ben by agreeing with him. Economics doesn’t need a Reformation: it needs a scientific revolution, similar to that triggered by Copernicus’s publication of “On the Revolutions of the Heavenly Spheres” in 1543.

The astronomical orthodoxy when Copernicus published Revolutions was Ptolemy’s model, which put the Earth at the center of the Universe, with the Sun, Moon, planets and stars rotating about it on perfect spheres called Deferents. However, their observed motion wasn’t perfectly circular, so Ptolemy offset the center of the Universe slightly from Earth itself, and added other elements to explain other anomalies – especially the apparent reversal of direction by the planets. Here he had the brilliant idea of placing them on other circles (called Epicycles) which rotated on their Deferents, so that sometimes they travelled East to West in the sky as seen from Earth, and other times West to East.

There was just one problem: this model of the Universe was fundamentally wrong. But this didn’t stop Ptolemaic astronomers, because Ptolemy’s basic paradigm of circles on circles was capable of describing any path by any object in space. They spent their time devising and perfecting this paradigm, generating models which could predict the motion of the planets for centuries ahead.

Then along came Copernicus, with an initially less accurate (because he still thought that the planets had circular orbits) but fundamentally correct model, which put the Sun, and not the Earth, at the center of the Solar System.

This was the first great scientific revolution, and it inverted our understanding of the Universe: rather than the Sun orbiting the Earth, the Earth orbited the Sun; rather than the Stars being nearby, they were far away; and gravity, not God, told the “Heavenly Bodies” how to move.

The revolution in astronomy that Copernicus triggered with his fundamentally different paradigm took over a century. Galileo played a key role here, by building the first serious telescope, and observing four of Jupiter’s moons – which orbited Jupiter rather than the Earth. Faced with both a far simpler model, and observations that were serious anomalies for Ptolemy’s theory, the old way of thinking gave way to the new.

But this revolution didn’t come peacefully, and it wasn’t led by the Ptolemaic astronomers themselves, but by new entrants to the field – including, crucially, Isaac Newton, whose equations of motion provided a mathematical explanation for why the orbits of planets were elliptical rather than circular.

I hope that the revolution we need in economics takes less than a century, but if it is left to today’s Neoclassical economists, it won’t happen at all. That revolution says that the economy is not in or even near its equilibrium, but far from equilibrium; that cycles are caused not by exogenous shocks to a stable system, but by the inherent cyclicality of a complex system, where the whole is far more than the sum of its parts; and that money, rather than merely a “veil over barter” which can be ignored in macroeconomic modelling (Oh, you didn’t realise that mainstream economists don’t include banks, debt and money in their models?), is crucial to both the functioning of capitalism and its occasional financial crises, of which 2007 was merely the most recent example.

Instead, like Ptolemaic astronomers confronted with the existence of Jupiter’s moons, they’re busy adding “financial frictions” (the equivalent of Epicycles) to their equilibrium models, and disparaging critics in the belief that their framework is the only way one can do macroeconomic modelling.

Balderdash. What they are instead illustrating is how little they know about alternative modelling approaches that dominate genuine sciences today.

I’m rather glad that the students chose to pin their Theses to the door of the London School of Economics, because the most recent example of economists displaying ignorance while thinking they were being wise came from Professor Reis of the LSE, in a paper entitled “Is something really wrong with macroeconomics?“. In defending economics against the criticism that it didn’t forecast the 2007 crisis, he argued that this didn’t look so bad when you compared economic forecasting to weather forecasting over the same time horizon:

Comparing macroeconomic forecasts to forecasts of average temperature or precipitation over the next 1-5 years, as opposed to over the next few days, it is far from clear that economics forecasting is doing so poorly. (Reis 2017)

This “killer comparison” actually shows how ignorant mainstream economists are of the modern complex systems techniques that have made meteorology so much more accurate than it was fifty years ago. The seminal paper in that field, written in 1963, observed that

“When our results concerning the instability of nonperiodic flow are applied to the atmosphere … prediction of the sufficiently distant future is impossible by any method, unless the present conditions are known exactly.” (Lorenz 1963, “Deterministic Nonperiodic Flow“) 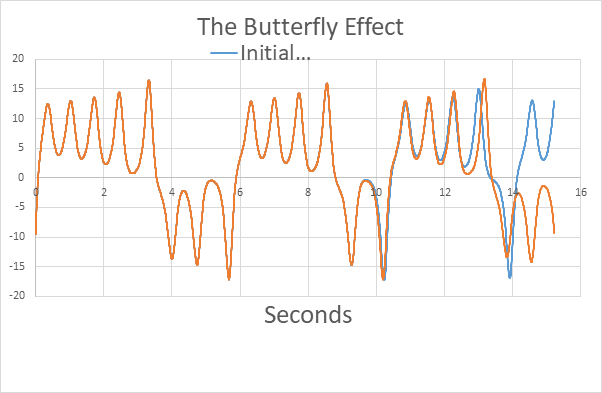 Meteorologists would justifiably laugh at Reis’s comparison – and would know instantly that he knew nothing about complex systems modelling. It is an ignorance he shares with the mainstream of the economics profession.