The Trump rally continued its momentum in February with a wild and woolly climb to new all-time highs in the major indexes. And while the market is clearly in a strong uptrend, the State of the Union Address and the lack of tangible progress by Congress in implementing the Trump agenda could position the market for an imminent decline, maybe as early as the middle of this week.

The Standard & Poor’s 500 Large Cap index (SPX) has been on an upside tear since the election, with a major leg up in the month of February alone. One telltale sign that a pause may lie ahead, though, is the widening of the Bollinger Bands (green lines around prices). This type of configuration often precedes a pullback or a consolidation.

The bullish side of the argument is that this market remains strong given the increase in both the On Balance Volume (OBV) and the Money Flow Index (MFI) indicators. But these indicators are now reaching areas that suggest that this market needs a break, which is why Mr. Trump’s State of the Union address to Congress – February 28 – could have been a pivotal event.

Given the level of opposition from the Democrats, the general animosity toward Mr. Trump from the media, and the mixed messages regarding his support from his own party, it is plausible that Tuesday night could well have bene the night that the wheels come off the Trump train. When Trump gives a speech, it often disappoints if not shocks the general public. But this time he seemed to “act presidential” and the markets rallied on Wednesday.

Perhaps in coming days enthusiasm could cool and the market pull back. That being said, Trump seems to have nine lives, which means that even if things don’t go well, he could eventually turn things around. If that were the case, market weakness could turn into a buying opportunity.

The market’s breadth, as measured by the NYSE Advance Decline line (NYAD) has been a flawless indicator since the November bottom. But now, just as MFI and OBV are reaching slightly cautionary levels, the AD line is also starting to flatten out. On February 24, there were only 121 more stocks advancing than those declining. This was not exactly a healthy advance, although the market was in worse shape throughout most of the day. Nonetheless, when the advance narrows over a few days, it’s usually a sign that the rally needs a rest. 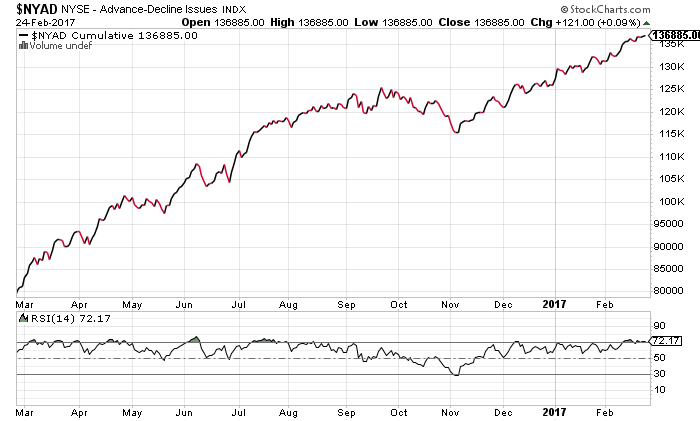 I added the RSI indicator to the chart of the NYAD because it has a credible record of pointing out when the line may be nearing a turning point. This is important because the AD line often tops out before the market, giving notice that widespread trouble may be near.

Notice the green peak in the RSI in June and July of 2016 and how the line rolled over for a few days after each peak. Also notice the lower peak in the RSI in September which preceded a more meaningful correction into the election bottom. The RSI has now been in the green zone for the past two weeks in February, which tells us that the market is overbought and may be predicting some sort of market weakness.

Blink and You May Miss It

The market is due for what seems to be a short-term pullback, perhaps in the 2%-5% range, if that much, over the next 2-3 weeks.

If the Trump dynamic remains unchanged, I would expect a resumption of the rally, which means that investors should once again be ready to consider the possibility of buying on the dip.

Fossil Fuels Are Falling Out Of Favor In The U.S.