Colombia will grant legal status to all Venezuelan migrants who fled there since 2016 to escape their country’s economic collapse and political crisis.

The bold new policy – which will give nearly 1 million undocumented migrants rights to legal employment, health care, education and Colombian banking services for 10 years – is driven by both empathy and pragmatism, says Colombian president Ivan Duque.

“They’ll likely stay for more than a decade,” Duque told NPR on March 3, 2021. “So it’s better to…open them the opportunity to contribute also to the Colombian economy.”

Venezuelan arrivals to Colombia are not confined to refugee camps, so they live scattered across the country. Documenting and absorbing so many migrants – who often arrive on foot, with only a handful of personal belongings and no valid ID – has been a challenge. Even rich countries like the U.S. struggle to handle mass migration. 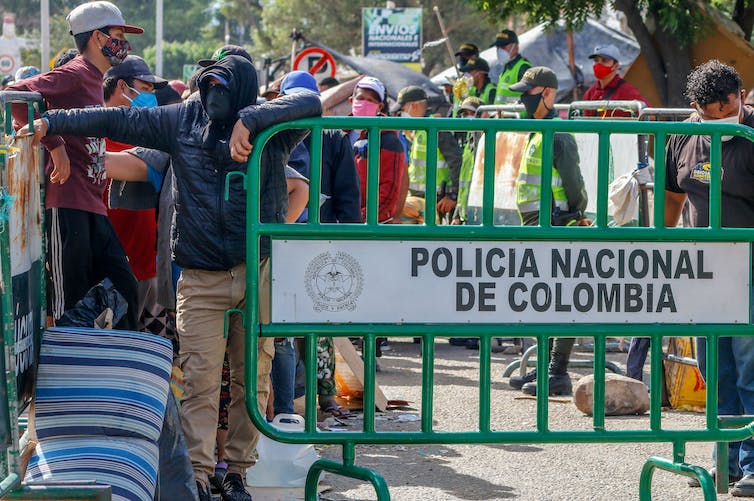 Venezuelans wait at the Colombian border to be processed and housed in tents in 2020. All Venezuelans now in Colombia will receive a 10-year residency permit. Schneyder Mendoza/AFP via Getty Images

But in some ways Colombia – itself no stranger to political strife and displacement – is uniquely prepared for this migration crisis.

Colombia has received the brunt of the exodus from neighboring Venezuela since 2015.

When many other South American countries closed their borders with Venezuela, Colombia offered a series of two-year permits giving about 700,000 Venezuelans the right to work and access to health care between 2017 and 2020. 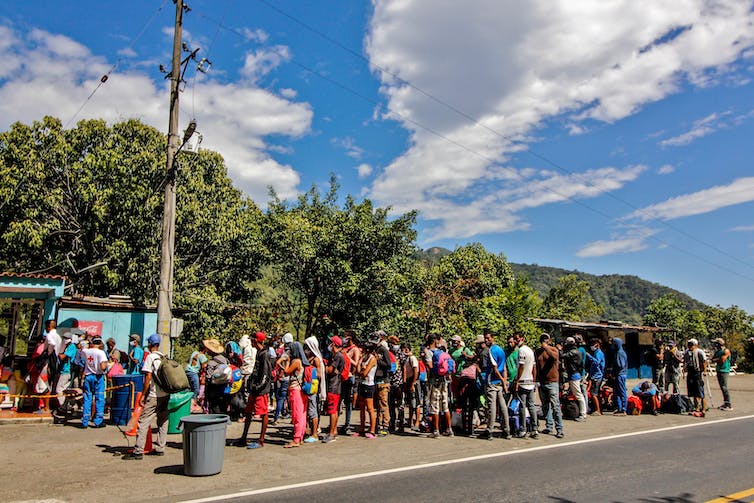 Venezuelan migrants receive food and medicine from the Red Cross near the Colombia-Venezuela border, February 2021. Schneyder Mendoza/AFP via Getty Images

Together with the new legalization plan covering 1 million additional migrants, nearly all the roughly 1.7 million Venezuelans who have come to Colombia since 2015 will have some form of legal status. New arrivals who are legally processed in the next two years will also be covered.

Colombia is not wealthy. But Colombians understand better than many what it means to be driven from your home.

Over 8 million of Colombia’s 50 million people have been displaced by ongoing civil conflict since the 1990s. At least 1 million moved into neighboring Venezuela, seeking safety and opportunity. A government peace agreement with the FARC guerrilla group in 2016 quelled but did not end violence in Colombia.

Because of this history, international organizations such as the United Nations High Commissioner for Refugees and World Food Program have worked in Colombia for decades. Today, the U.N.‘s refugee agency and International Organization for Migration are leading a group of 73 international organizations and agencies to align their work with Colombia’s national humanitarian efforts. The group works in 14 states across Colombia, providing assistance that ranges from distributing COVID-19 hygiene kits to enrolling migrant children in school.

The Colombian government also has some 50 agencies dedicated to helping Colombians displaced by armed conflict. Now many are adapting that experience to help Venezuelan migrants.

Since 2019 we have interviewed over a dozen government officials, lawyers and civil society representatives in two Colombian “departments,” or states, that have received high numbers of Venezuelan migrants: Atlflntico and Norte de Santander. This work was part of a broader study on how countries manage mass migration.

At the religious charity Secretariado de Pastoral Social-Cflritas, part of the Catholic Archdiocese of the city of Barranquilla, in Atlflntico, the longtime director said the migrant situation today looks a lot like it did decades ago when Colombia’s civil conflict peaked in the Atlflntico region, with people wandering around, not knowing anyone and not sure what to do or where to go. Then as now, they slept in the parks and on the streets.

“We already lived it in the ’90s,” said the director of Pastoral Social.

Back then, the group helped the Colombians displaced by fighting to find food and shelter. Now many of its clients are Venezuelan.

The nonprofit Opción Legal – an umbrella organization that manages refugee programs for the U.N. – has a similar origin story.

At its start 21 years ago, staffers worked in some of the most difficult conflict regions in Colombia, training the nonprofits that help displaced Colombians in accounting and legal processes, among other technical functions.

Now Opción Legal offers Venezuelan migrants free legal advice about getting Colombian health care and education, among other services. Using a nationwide network of 22 Colombian universities developed over many years, it trains students and professors to extend the reach of its legal support programs to Venezuelan migrants. 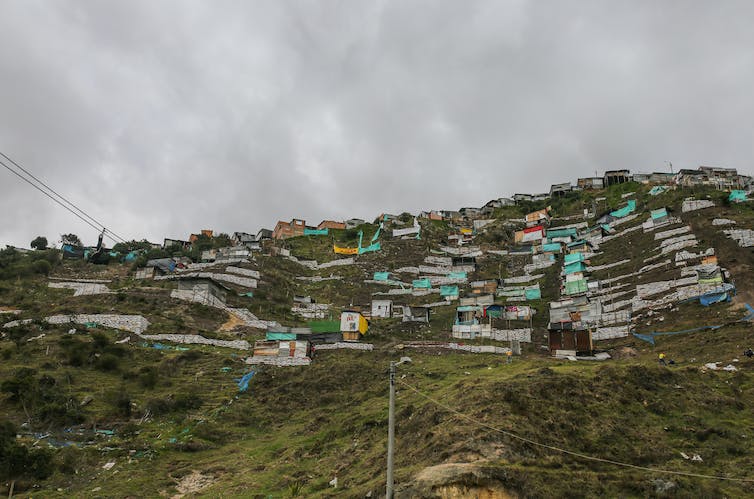 An informal settlement housing many displaced Colombians, on the outskirts of Bogota. Juancho Torres/Anadolu Agency via Getty Images

In 2019, nearly 80 million people across the globe – mostly Syrians, Venezuelans, Afghans and South Sudanese – were driven from their homes by crime, climate change, chronic poverty, war, political instability and disaster, according to the U.N. – an all-time high. Many will spend years or decades waiting for a permanent solution, whether that be settling locally, returning home or finding a new country to make a life.

Colombia’s new legalization plan reflects an assessment that Venezuela’s collapse is a long-term challenge and that integrating migrants is a better solution, economically and socially, than trying to keep out or expel them.

[You’re smart and curious about the world. So are The Conversation’s authors and editors. You can get our highlights each weekend.]

Colombia is being internationally applauded for its humanitarianism. But equipping hospitals and schools to handle the needs of this rapidly growing and often very needy population will require a lot of money. And most of it will have to come from the international community, because Colombia does not have the money to do it single-handedly. Yet the Venezuelan migrant crisis is a chronically underfunded area of humanitarian work.

And Colombia still has domestic migration problems of its own. Dissident FARC members, other guerrilla groups, drug cartels and insurgencies continue to battle over territory and resources, displacing 70,865 more Colombians last year alone.

The Colombian government is betting that the U.N. and international agencies will help it fulfill its ambitious goal of welcoming 1.7 million Venezuelan refugees and migrants.

If it works, that money would improve government services for all Colombians, too.