The Federal Reserve has vowed to provide up to US$2.3 trillion in lending to support households, employers, financial markets and state and local governments struggling as a result of the coronavirus and corresponding stay-at-home orders.

I have a Ph.D. in economics, direct the Sound Money Project at the American Institute for Economic Research and write regularly on Federal Reserve policy. And, yet, it is difficult for me to wrap my head around a number that large. If you were to stack 2.3 trillion $1 bills, it would reach over halfway to the Moon.

Put simply, it is a lot of money. Where does it all come from?

Unlike the trillions of dollars the Treasury is spending to save the economy by bailing out companies or beefing up unemployment checks, very little of the Fed’s money actually comes from taxpayers or sales of government bonds. Most of it, in fact, emerges right out of thin air. And that has costs. 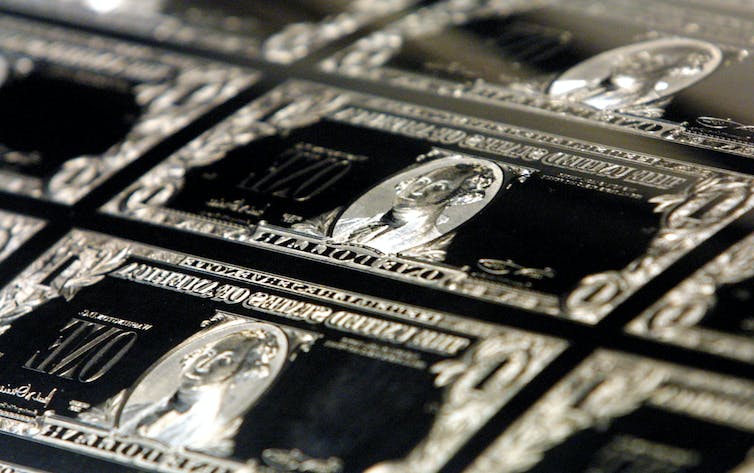 The Fed is ‘making’ a lot of money. Alex Wong/Getty Images

It is common to hear people say the Fed prints money.

That’s not technically correct. The Bureau of Engraving and Printing, an agency of the U.S. Treasury, does the printing. The Fed, for its part, purchases cash from the bureau at cost and then puts it in circulation.

Although you may have heard some economists talk about the Fed figuratively dropping cash from helicopters, its method of distribution isn’t quite as colorful. Instead, it gives banks cash in exchange for old, worn-out notes or digital balances held by the banks at the Fed. In this way, the Fed can help banks accommodate changes in demand for banknotes, like those in advance of major holidays or after natural disasters.

These exchanges are dollar-for-dollar swaps. The Fed does not typically increase the monetary base – the total amount of currency in circulation and reserves held by banks at the central bank – when it distributes new banknotes.

To put more money into circulation, the Fed typically purchases financial assets – in much the same way that it plans to spend that $2.3 trillion.

To understand how, one must first recognize that the Fed is a bankers’ bank. That is, banks hold deposits at the Fed much like you or I might hold deposits in a checking account at Chase or Bank of America. That means when the Fed purchases a government bond from a bank or makes a loan to a bank, it does not have to – and usually doesn’t – pay with cash. Instead, the Fed just credits the selling or borrowing bank’s account.

The Fed does not print money to buy assets because it does not have to. It can create money with a mere keystroke.

So as the Fed buys Treasuries, mortgage-backed securities, corporate debt and other assets over the coming weeks and months, money will rarely change hands. It will just move from one account to another.

While the Fed can create money out of thin air, that does not mean it does so without cost. Indeed, there are two potential costs of creating money that one should keep in mind.

The first results from inflation, which denotes a general increase in prices and, correspondingly, a fall in the purchasing power of money. Money is a highly liquid – easily exchangeable – asset we use to make purchases. When the Fed creates more money than we want to hold on to, we exchange the excess money for less liquid assets, including goods and services. Prices are driven up in the process. When the Fed does this routinely, expected inflation gets built into long-term contracts, like mortgages and employment agreements. Businesses incur costs from having to change prices more frequently, while consumers have to make more frequent trips to the bank or ATM.

The other cost is a consequence of reallocating credit.

Suppose the Fed makes a loan to the “Bank of Fast and Loose Lending.” If the bank wasn’t able to secure alternative funding, this suggests that other private financial institutions deemed its lending practices too risky. In making the loan, the Fed has only created more money. It has not created more real resources that can be bought with money. And so, by giving the Bank of Fast and Loose Lending a lifeline, the Fed enables it to take scarce real resources away from other productive ventures in the economy.

In recent years, the Fed has shown itself to be quite adept at keeping inflation low, even when making large-scale asset purchases.

The central bank purchased nearly $3.6 trillion worth of assets from September 2008 to January 2015, yet annual inflation averaged roughly 1.5% over the period – well below its 2% target.

I’m less sanguine about the Fed’s ability to keep the costs of reallocating credit low. Congress has traditionally limited the Fed to making loans to banks and other financial market institutions. But now it is tasking the Fed with providing direct assistance to nonbank businesses and municipalities – areas where the Fed lacks experience.

It is difficult to predict how well the Fed will manage its new lending facilities. But its limited experience making loans to small businesses – in the 1930s, for example – does little to alleviate the concerns of myself and others.

Congress gave the Fed the ability to create money from thin air. The Fed should wield this enormous power wisely.

[Insight, in your inbox each day. You can get it with The Conversation’s email newsletter.]