— this post authored by Tim O’Brien, University of Manchester

Something unusual happened on January 31. A total lunar eclipse, was be visible from Asia, Australasia and North and Central America, coinciding with a “blue moon” and a “supermoon” in what some are calling a “super blue blood moon”.

The event, which for western hemisphere observers happens for the first time in 150 years, will also be the last in a trilogy of supermoons over the past two months. It sounds cool, but how excited should you really be? And is there anything scientists can actually get out of it?

To be honest, I feel pretty conflicted about all the excitement surrounding the supermoon, a term which describes the moon when it is at a close point to the Earth. It’s great that people get excited about astronomy, but the trouble is that a supermoon in itself is not really all that special.

Since the moon follows an elliptical orbit around the Earth, the distance between the two bodies changes, ranging from about 360,000km to 406,000km. At its closest point, perigee, the moon will obviously appear largest. Such a “maximoon” has an apparent diameter about 13% larger than a “minimoon” at its most distant point, apogee. 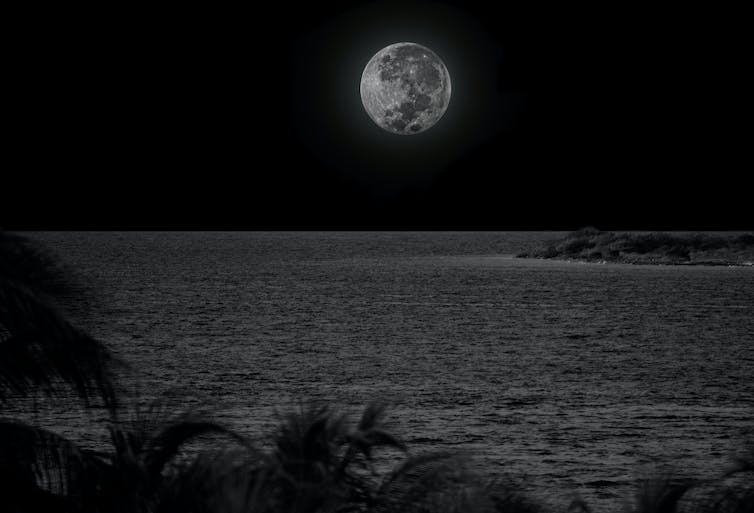 The effect of a maximoon is often exaggerated – it is only about 7% larger and 15% brighter than the average moon. This is hardly noticeable when looking at it with the unaided eye. In fact, if you’ve seen the moon looking huge at some point, it was probably due to an optical illusion rather than it being near perigee. It’s not fully understood why, but the moon seen close to the horizon just appears larger than when it’s high in the sky.

The mechanisms behind the maximoon have long been known, with astronomers referring to it as “perigee full moon” or a “perigee syzygy”, a lovely word that means three celestial bodies in a line. Unsurprisingly, the term supermoon has proved more popular. Coined by an astrologer in 1979, it wasn’t really used at all widely until March 2011 when the Japanese earthquake and tsunami was erroneously linked to a supermoon which actually happened eight days later.

What’s more, a supermoon isn’t exactly the same thing as a maximoon. If you waited until the instant of full moon exactly coincided with the instant of perigee, supermoons would be vanishingly rare. But an unscientific fudge factor is usually included, allowing the full moon to be “near” perigee – typically 90% or closer. Change the size of the fudge factor and you can have as many or as few supermoons as you like. In fact, for this week’s event, the moon is closest to Earth at about 10:00 UTC on January 30 but the full moon is not till over a day later when it is about 1,200km farther away.

A blue moon does not appear blue. It’s just a term that, in the 1940s, was mistakenly used to describe a rare occasion: the second full moon in a calendar month. Full moons are separated by about 29.5 days and so typically occur in different months, with a blue moon appearing on average every 30 months or so.

A blood moon on the other hand actually appears dusky red. The name, which is not used by scientists, apparently derives from apocalyptic Biblical prophecy. As with supermoon, the term only became popular very recently, in this case in 2014 when a series of four over 18 months spawned a best-selling book. 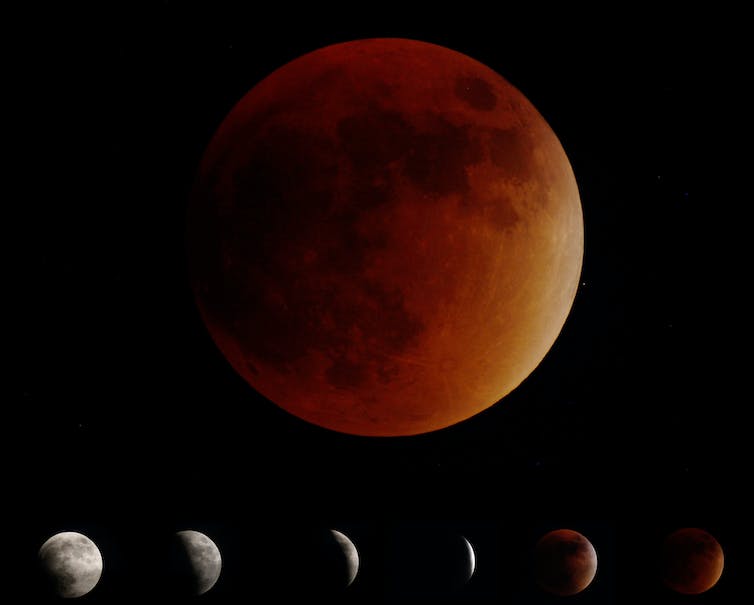 The effect is caused by a lunar eclipse, when the moon is on the far side of the sun from the Earth – aligned so that it passes into the Earth’s shadow. The moon darkens very considerably and is only lit by the traces of sunlight refracted through the Earth’s atmosphere. The blue component of the sunlight is scattered to large angles by small particles in the atmosphere leaving only the longer wavelength red light to illuminate the moon.

A lunar eclipse happens when the moon is completely in the Earth’s shadow. Tomruen, CC BY-SA

Over this century, there will be 85 total lunar eclipses. This particular one will be visible from Asia, Australasia, North and Central America, but not from Western Europe or much of Africa and South America (though anyone can still enjoy the near full moon).

A lunar eclipse is a great opportunity for public viewing, but there are still things that scientists can learn from the event. The details of how the sunlight we see reflected from the moon during eclipse has been altered, scattered and absorbed on its way through our atmosphere, and how this is affected by, for example, volcanic eruptions or even meteor showers, are still being studied.

But in recent years, there has been a resurgence of interest in studying lunar eclipses from a surprising source, the discovery of planets orbiting other stars. If we see an “exoplanet” pass across the face of its parent star, a small fraction of the starlight we collect will have passed through the planet’s atmosphere. Looking at spectra – measurements of light broken down by wavelength – taken during such a transit with those taken out of transit can help determine the composition of the atmosphere. This could include biosignatures such as oxygen, ozone or methane – which might give away the presence of extraterrestrial life.

A lunar eclipse is a perfect opportunity to study the details of the same effect close to home – sunlight reflected from the moon during eclipse has passed through the Earth’s atmosphere and been imprinted with its characteristics. This means the Earth takes the place of a transiting exoplanet. Various lunar eclipse studies are being conducted ahead of observations with upcoming facilities – such as the James Webb Space Telescope and the European Extremely Large Telescope – which have the potential to study the atmospheres of distant Earth-like planets.

But even if you’re not a scientist, do go out and have a look this week. You are likely to see a slightly bigger moon than usual, exaggerated in size by the moon illusion as it rises or sets, and in some parts of the globe appearing dark and red from the lunar eclipse. Perhaps the event could inspire you to take up moon gazing. There’s so much to love – such as the shadows of mountains and crater walls at their most dramatic and the incredible feeling of flying across the lunar landscape when you view it through a telescope. As far as I’m concerned, every moon is super.