Yesterday we emphasized that the EU represents a serious recessionary problem for the U.S. and should be watched carefully for any additional weakness. There are other issues in the U.S. that by themselves, could bring the U.S. Financial ‘House of cards’ crashing down. Our fear is that it could happen at any time, maybe this coming week!

Yes we are VERY concerned, but we are not going to rush right out and sell everything, nor do we suggest you do either, but we are watching very carefully for signs of a down-turn signal and not just a three to four percent bear traps we have seen.

The issue of the markets being ‘overvalued’ is another important bearish signal we are watching and is being fiercely debated by many if it is or not. However, regardless of its importance, it is not likely to be the catalyst that turns the U.S. Financial World into a boiling caldron. It is most likely to be another Grey Swan or another log being thrown in the ongoing fire that will FINALLY be the straw that breaks the camels back. It will be a combination of things and when the day comes, we expect it to be so ‘soft’ in nature, many will not recognize the market ‘top’ as anything extraordinary.

Here are some ‘logs’ that will be eventually be thrown in the already brightly burning fire. Which one is going to be the breeze that will tumble the U.S. Financial ‘House of Cards’, I wish I knew?

The EU is a serious recessionary issue for the U.S. and overextended valuations is another according to author, Katchum, “The U.S. stock market could see a significant correction based on overextended valuations”, in his article, Market Outlook For The Coming Months: Stocks, Bonds And Gold. He states, along with may others, ‘. . . we’re in a stock market bubble’ and ‘today we are overvalued to an extreme of 124%’.

There are as many analysts who do not agree that stocks are overvalued as David Moenning writes in his article below. He points out correctly, there can be many reason why a market turns around and descends as I have been saying for weeks.

My question is who is right and is there any truth in-between?

Daily State Of The Markets: No Professor Shiller, Stocks Are Not Dangerously Overvalued

The key point to this article was not to try and predict future returns – few, if any indicators can do that effectively over the long-term.

No, the key was to point out that valuation indicators cannot be used in a vacuum and must be adjusted for the current “era”. I am NOT saying this time it is different – merely that the valuation metrics are not “dangerously high” at this stage of the game.

However, it is also worth noting that stocks are definitely NOT cheap here and that risk is significantly higher than it was two years ago.

What it boils down to is how sure are you that the bull run will continue and for how long? At some point a market top will be reached and the markets will turn down; that is a fact and not some scary threat. What it will look like and when it will happen is always hindsight, but it could turn out to be scary for those not believing it will happen in their lifetime.

Up Next For Bulls, A Big Test Of Conviction

Bulls are having their way as summer draws to a close. But now the S&P 500 must deal with the ominous 2,000 level.

U.S. Treasuries continue to enjoy strong demand, as well, even while the Fed continues to taper its bond buying activity.

At the same time, the Dow Jones Industrials blue chips index is struggling to hold the 17,000 level once again.

Comments based on Lee Adler’s article in the Wall Street Examiner, he feels the foundation of the aging bull run is beginning to crumble and time is running out on the bulls hopes of continuing to see higher highs. Was this past week the end?

On each occasion over the past 42 years when claims have reached a similar level at this time of year, the stock market has subsequently collapsed within a few months.

The numbers persisted at extreme levels at the tops of the last two bubbles for a year before the collapses got rolling. The foundations were already beginning to crumble by the time the first anniversary of record readings rolled around. Based on those standards, time is not on the bulls’ side.

So here we are relatively convinced there will be a ‘correction’, but it can’t be all that bad can it?

Being too bullish is sometimes not a good thing, but is the above bullishness really a signal we are headed for something greater than a 10% correction?

Are Stocks Set For A Major Decline In The Fall? 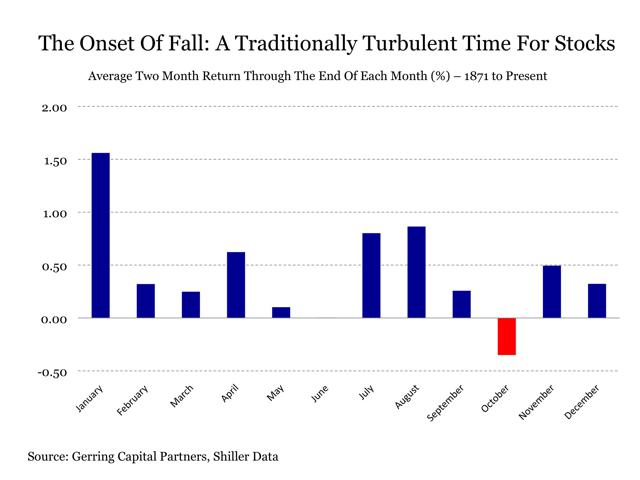 The bottom line is that we will see a major correction in our lifetime and that is a given. What we are concerned about here at Econintersect.com is that a ‘serious’ decline will ‘start’ to happen at the end of this month and could very well turn into a major decline. What are your thoughts? I would love to hear from you.

The Week Ahead: Are there Winning Stocks for the Rest of the Year?