Contrary to conventional wisdom, extremely low initial unemployment claims have an ominous track record. Since the initial unemployment claims data first set a record low in September 2013, I have pointed out that record low claims suggest a distorted, overheated, bubble top economy. On each occasion over the past 42 years when claims have reached a similar level at this time of year, the stock market has subsequently collapsed within a few months.

The overheating that has been indicated in the claims data for months has also recently shown up in the JOLTS data. The excesses and distortions are real in certain sectors of the economy. In any bubble economy, when the sectors that are in the most extreme bubbles begin to weaken, it has been only a matter of time until the entire bubble driven economic house of cards collapses.

The headline, seasonally adjusted (not actual) number for initial unemployment claims for the week ended August 16 was 298,000. That was 10,000 less than the consensus guess of Wall Street economists. In the usual game of expected versus reported numbers, the market didn’t know what to make of that. It’s irrelevant anyway, since the kneejerk reaction usually only lasts 20 minutes until the market gets back to whatever it was doing in the first place.

It’s the big picture that matters, and here the actual, not seasonally finagled numbers, which the Wall Street captured media ignores, shows claims still near the levels reached at the top of the housing/credit bubble in 2006. That’s after 11 months of nearly continuous record readings. Since September 2013 when the number of claims first fell to a record low, the data has suggested that the central bank driven financial engineering/credit bubble has reached a dangerous juncture. 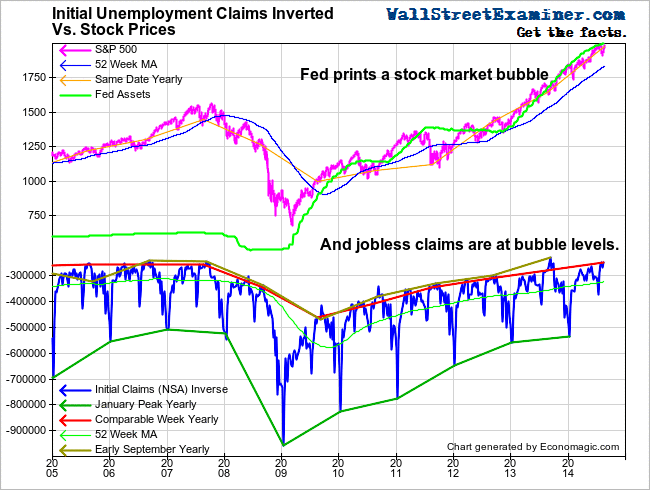 Thanks to their focus on the made up seasonally adjusted (SA) numbers, news media press release repeaters have given little indication that by historical standards the numbers have represented a danger sign. They have recognized the record levels but the media echo chamber continues to present that as positive, rather than the danger sign that it is.

Here are the actual numbers, along with the data showing why those numbers are so troubling. 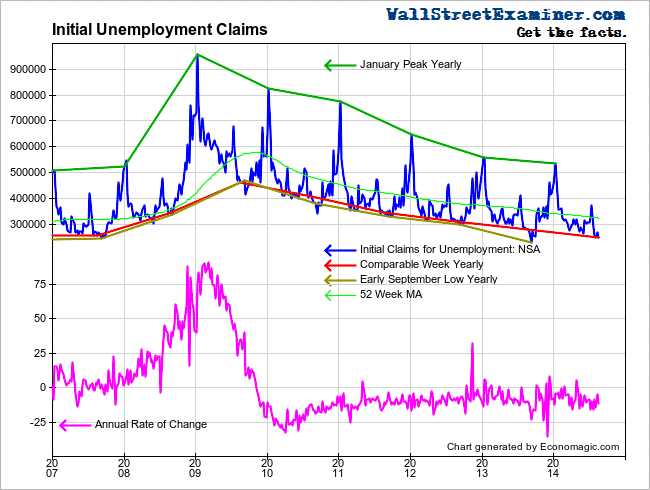 Actual initial unemployment claims were 11.5% lower than the same week a year ago. The normal range of the annual rate of change the past 3.5 years has mostly fluctuated between approximately -5% and -15%. The current number is centered within trend norms.

New claims were 1,794 per million workers counted in July nonfarm payrolls. This compares with 1,851 per million in this week of 2007, which was when the housing bubble was on the verge of collapse, and 1,852 per million in the comparable week of 2006, around the top of the bubble. In September 2013, this figure set a record low. In each ensuing week the numbers remained at or near record levels. The current number was a 40 year record low for this week. In fact, total weekly initial claims have only been this low in August in 1972 and 1973, 1987, 2000, and 2007. Each period preceded a stock market collapse. As a percentage of the employed workforce, claims have never been this low in August. 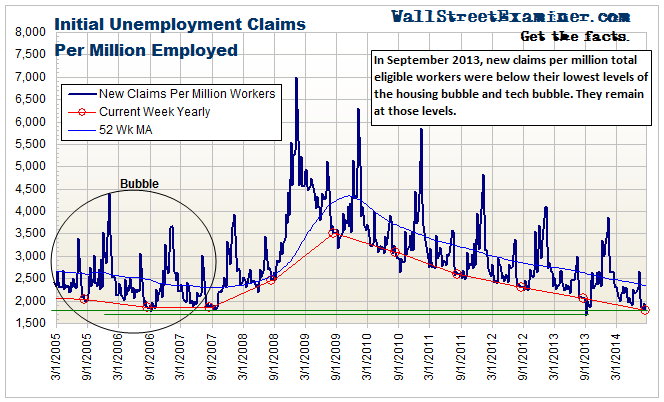 With record readings having persisted for 11 months, let’s just say that the actual numbers have given us fair warning that the Fed sponsored financial engineering bubble may not have much longer before it too begins to deflate. The numbers persisted at extreme levels at the tops of the last two bubbles for a year before the collapses got rolling. The foundations were already beginning to crumble by the time the first anniversary of record readings rolled around. Based on those standards, time is not on the bulls’ side.