U.S. stocks rose on Friday buoyed by a consumer sentiment report that surprised

Earlier Friday, the preliminary Thomson Reuters/University of Michigan consumer sentiment index remained unchanged at 81.2 for February, beating expectations for a fall to 80.6, which drew applause on Wall Street.

Elsewhere, the Federal Reserve reported that U.S. industrial production fell 0.3% in January, defying expectations for a 0.3% rise after a 0.3% increase the previous month, though equities market shrugged off the news and blamed it on rough winter weather.

Data also showed that U.S. import prices rose 0.1% last month, confounding expectations for a 0.1% downtick after a 0.2% rise in December.

While economic indicators have come in hit-or-miss this year, many went long on stocks betting that the second quarter will bring more robust economic data.

The U.S. Labor Department reported earlier that the economy added 113,000 jobs in January, less than an expected 185,000 increase. December’s figure was revised up to a 75,000 rise from a previously estimated 74,000 increase.

The greenback traded lower against most major currencies on Friday after data revealed output at the nation’s factories, mines and utilities missed expectations for January, though a rather upbeat consumer sentiment report cushioned the dollar’s losses.

Less-than-stellar economic indicators hitting the wire in the U.S. this week softened the greenback by reminding investors the Federal Reserve won’t rush to taper the pace of its monthly bond purchases, which tend to weaken the currency by keeping long-term interest rates low.

The euro strengthened after preliminary data showed that the euro area’s gross domestic product expanded by 0.3% in the fourth-quarter, beating expectations for a 0.2% gain, after a 0.1% rise in the third quarter.

A separate report showed that German GDP rose 0.4% in the fourth quarter, exceeding expectations for a 0.3% expansion, and after a 0.3% rise in the three months to September.

In France, the GDP expanded by 0.3% in the last quarter, compared to expectations for a 0.2% rise, after a 0.1% contraction in the third quarter.

In Canada, official data showed that manufacturing sales fell 0.9% in December compared to expectations for a 0.3% rise. Manufacturing sales in November were revised down to a 0.5% gain from a previously estimated 1% increase.

The dollar index, which tracks the performance of the greenback versus a basket of six other major currencies, was down 0.22% at 80.18.

Unpopular natural resources have made a comeback in early 2014, beating out other asset classes, said Deutsche Bank AG (FRA:DBK) in a Friday note. London-based strategists for the German global bank wrote:

“The majority of commodity indices are now posting positive returns since the end of last year. Commodities have moved to the top of the league table in terms of asset class performance. Strength has been across the board over the past week with energy and metals the strongest performers.” 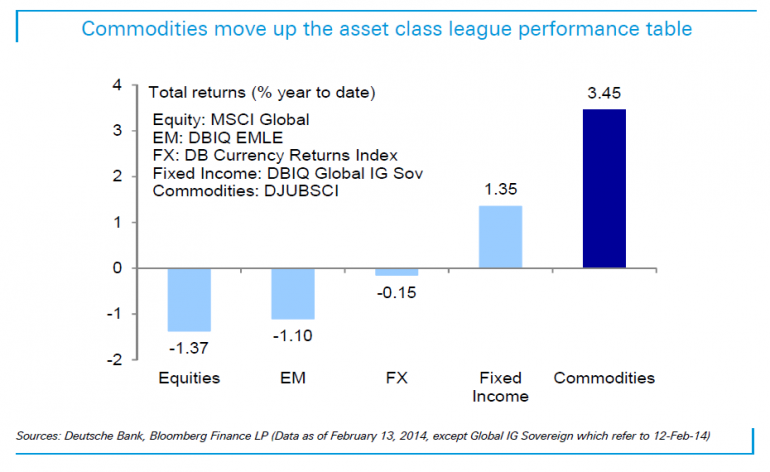 That is strong performance relative to fixed income, currencies, emerging market equities and global equity indices. Gold has done especially well in the past several weeks, rising to highs of $1,300 per ounce which have not been seen since November 2013. The stronger performance for gold comes after a year which saw severe slumps in price and investor sentiment. See complete report for gold in the next section.

That doesn’t mean returns will last. The analysts are bearish on most commodity sectors, including energy, precious metals and agricultural products.

Nonetheless, it’s a little more heartening than commodities markets from 2013. By the end of 2013, commodities earned a reputation as the worst performing assets in terms of returns, as the benchmark Dow Jones UBS commodities index fell 9.6 percent over 2013. From Deutsche Bank analysts:

“The first six weeks of 2014 have been relatively kind to commodities compared to the losses suffered on benchmark equity and EM indices.”

Stock markets have slowed in early 2014, after a heady 2013 where stocks repeatedly broke records on signs of a recovery in developed economies.

Gold prices shot up on Friday after a week of soft data sparked sentiments the Federal Reserve will very gradually taper its monthly bond purchases, which weaken the dollar by suppressing interest rates.

Gold and the dollar tend to trade inversely with one another.

Less-than-stellar economic indicators hitting the wire in the U.S. this week sent gold prices gaining on Friday by reminding investors the Federal Reserve won’t rush to taper the pace of its monthly bond purchases, which have supported gold since 2012 by softening the dollar.

Gold prices rose on Friday on expectations that the disappointing U.S. jobs report for January delivered a week ago will cue the Federal Reserve to taper its monthly bond-buying program on a very gradual basis.

On Thursday, the Commerce Department reported that U.S. retail sales fell 0.4% in January, confounding expectations for a 0.3% increase. December’s figure was revised down to a decline of 0.1% from a previously reported 0.2% increase. This data serevs to reinforce the negativity seen in the employment report.

Crude prices fell on Friday after lackluster data sparked a round of profit taking, ending gains stemming from a winter storm plowing across the eastern seaboard that likely hiked demand for heating oil.

On the New York Mercantile Exchange, West Texas Intermediate crude for delivery in March traded at USD100.16 a barrel during U.S. trading, down 0.19%. New York-traded oil futures hit a session low of USD99.45 a barrel and a high of USD100.46 a barrel.

Profit taking sent prices falling as well, as all week investors had priced in the likelihood a powerful winter storm that dumped snow across the eastern U.S., hiking demand for heating oil, and later sold crude futures for profits.

Elsewhere, on the ICE Futures Exchange in London, Brent oil futures for April delivery were up 0.11% and trading at 108.64 a barrel, while the spread between the Brent and U.S. crude contracts stood at 8.03 a barrel.

On the New York Mercantile Exchange, natural gas futures for delivery in March traded at USD5.229 per million British thermal units during U.S. trading, up 0.11%. The commodity hit session high of USD5.387 and a low of USD5.162.

The March contract settled up 8.32% on Thursday to end at USD5.223 per million British thermal units.

A series of powerful winter storms have prompted homes and business to ramp up on their heating, thus hiking demand for natural gas at the country’s thermal power plants, weekly supply data released Thursday revealed.

The U.S. Energy Information Administration said in its weekly report that natural gas storage in the U.S. in the week ended Feb. 7 fell by 237 billion cubic feet, outpacing already bullish expectations for a decline of 233 billion cubic feet.

The five-year average change for the week is a decline of 162 billion cubic feet.

The heating season from November through March is the peak demand period for U.S. gas consumption. Approximately 52% of U.S. households use natural gas for heating, according to the Energy Department.

On the New York Mercantile Exchange, natural gas futures for delivery in March traded at USD4.798 per million British thermal units during U.S. trading, down 2.70%. The commodity hit session high of USD5.043 and a low of USD4.744.

Market Commentary: Markets End the Week on a High Note

Love and Money – Valentines Day in the United States

Love and Money – Valentines Day in the United States