A growing problem all across the Globe is that of Refugees. Millions of people trying to flee from one place and seek refuge in another. The reasons appear to vary, in some cases because of ongoing conflict and war; in others due to Drought and the inability to provide enough food for the local population; other cases due to religious and ethnic differences between classes in the local society, etc.

(assuming everyone’s plugins work right and the bandwidth is decent)

Migrants, who were found at sea on a boat, collect water during a heavy rain at a temporary refuge camp near Kanyin Chaung jetty, Myanmar, on June 4, 2015.

Of course, all of these phenomena have two things in common, which are Population Overshoot and Resource Depletion. All the conflicts stem from that, all the rest is just distraction. If there really was plenty for everybody, if some people weren’t being exploited for the benefit of others and there was an equitable distribution of the wealth, then you would have no conflict. Everybody would be HAPPY!

The great surplus of energy we enjoyed globally here for the last couple of centuries allowed populations to balloon up all over the world, many of those populations in locations which have no chance of being self-sufficient at their current population size. Saudi Arabia a prime example of this, they traded their oil for food and used it to pump up water from deep aquifers and desalinate still more water from the ocean, and blew up from 1M people to 30M people in a century. In reality of course, Arabia is a DESERT! The House of Saud Princes are descendants of a bunch of Bedouin Tribesmen who wandered that desert. Then with their Oil Wealth they imported in tons of people to do the scut work of the industrial society. No way all these folks can continue to survive in Deserts of Arabia, so they will go on the MOVE. At least if they don”t die first anyhow.

Although we have seen this for quite some time here in Amerika down on the Border with Mejico, constant bewailing of the problem of “Illegal Aliens” (as though they come from Outer Space without papers), the current really BIG problems are occurring in Southern Europe as refugees from the War Zones and progressively more desertified areas attempt to flee across the Mediterranean Sea by any thing that sort of floats, and on foot across Turkey and into Greece, all trying to get to the closest place where they think they still might carve out a life for themselves.

Sadly of course, Ground Zero for a lot of this migration is Italy where they are only doing marginally better than the folks down in MENA are doing. At least 1000 a day currently actually arriving alive, plus they find a few bodies washing up on the beaches in the Tourist hangouts on a daily basis as well.

Recently Jason Heppenstall from 22 Billion Energy Slaves was vacationing down in Italy and wrote this about the situation:

“[As an aside, a friend of mine got married in Sicily a couple of months ago and the wedding reception was continually interrupted by overhead helicopters coming back from sea with migrants dangling from them. Some children asked “What is going on?” and the adults comforted them by saying it was just some swimmers who had got into difficulty. When this carried on for two full days (Sicilian weddings being long affairs) the children must have concluded that practically everyone swimming needed rescuing.]”

For those that do make the crossing alive, they aren’t exactly being welcome with open arms by the Italians Rome (AFP) – Residents in a chic Rome suburb and a northern Italian village staged angry anti-immigrant protests on Friday, with villagers setting mattresses ablaze in a bid to stop authorities from housing migrants.

Authorities in the village of Quito plan to accommodate 101 immigrants in empty apartments, but several residents broke into one of the buildings, removed camp beds, mattresses and televisions intended for the newcomers and set them on fire outside.

The protesters then put up tents, with the Corriere della Sera newspaper quoting them as saying: “We aren’t going home until they leave — this is an invasion.”

Italy is currently hosting more than 80,000 migrants who have crossed the Mediterranean fleeing war, persecution or poverty in the Middle East and Africa. The arrivals include many Africans, particularly Eritreans, as well as Syrians.

Not very welcoming over there, obviously. Not a lot different here though, as currently leading Repub POTUS candidate The Donald not only doesn’t want to let any new refugees IN, he wants to kick the ones already here OUT.

Donald Trump has fired another loud shot in the battle for the Republican presidential nomination in 2016, telling NBC News’ Meet the Press illegal immigrants to the US “have to go”. 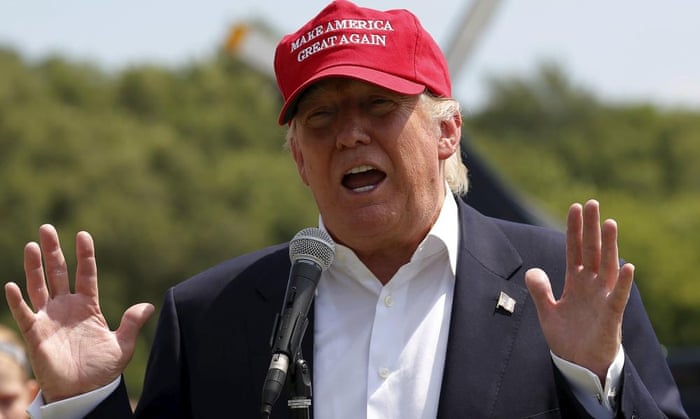 Republican presidential candidate Donald Trump said: ‘They have to go. Chuck, we either have a country, or we don’t have a country.’
Photograph: Jim Young/Reuters

The real-estate mogul and sometime reality TV star, who leads polls of the Republican field after a series of controversies stoked by abrasive remarks, made the comment during an interview with host Chuck Todd which was conducted on his private plane as it sat on a runway in Des Moines, Iowa.

The conversation covered the candidate’s determination to rescind President Barack Obama’s executive orders on immigration which, subject to court battles, would protect up to 5 million undocumented children and family members from deportation.

Now, I cannot agree with The Donald that we even could kick all the undocumented migrants out, even if he could get such legislation passed. It’s completely impractical, how would you do such a purge? Go on a house to house search with the Gestapo asking “Let me see your papers”?

However, the idea that in an era of steady resource depletion and population overshoot all refugees can be welcome with open arms and the Torch of the Statue of Liberty serving as a Beacon of Freedom is an equally unrealistic idea. Both here, in Europe and in Asia as well borders are going to be shut down and migration is going to become increasingly more difficult as time goes by. If you are figuring on trying to migrate BEFORE things get that bad in your neighborhood, now would be a good time to get moving.

As with many article on the Diner, this one was inspired by a post made by one of the KollapsniksTM on the Diner Forum. I will close with my response to that post.

Frankly, Andre, fuck charity! These people are voting with their feet, and they’re coming to America.

Now, this gives you warm and fuzzy feelings about the History of Amerika as written in the history books, and those images of the Statue of Liberty always bring up the Patriotic feelings and belief in the Land of Liberty.

A few things to note here though. What do you notice about all those pictures of Immigrants? They’re all WHITE people from Europe!

Then look at those wonderful pictures of Greenery, Farms, Open Spaces etc.

This is nostalgia for the PAST. Those wide open spaces and boundless opportunity are GONE now.

Far,
We’ve been traveling far
Without a home
But not without a star

Free,
Only want to be free
We huddle close
Hang on to a dream

Now, how realistic is this idea of “Freedom” and Liberty in the Amerika of TODAY, not your nostalgic history lessons? Patriot Act, NDAA, TPP, Militarized Police, spying by the NSA and data mining from Google, precisely where is the FREEDOM here? Granted it is still probably better than wherever they are coming from, but they’ll be pretty disappointed in a few years, at most.

The main issue though remains the resource problem. Half of the land mass of the FSoA west of the Mississippi River will once again be the Great Amerikan Desert soon enough. We will have our own internal refugee problem that cannot be solved, except by Dead People. Taking in more now just makes the problem worse here later.

The days of escaping as a refugee to freedom in less populated lands where there was still Opportunity are OVAH. Refugees are unlikely to be welcome anywhere pretty soon. Certainly in Europe they are not going to constantly accept Wave After Wave of boat people coming from North Africa and walking across Syria and Turkey into Greece.

For probably 2/3rds of the Global population, there is already no hope. They cannot escape.

In the words of Hawkeye from “Last of the Mohicans“

“they’re not strangers… and they stay as they lay…”

First published on the Doomstead Diner on August 20, 2015

Is It A One-Off Depreciation For China?

The Week Ahead: The Start of the ‘Big One’?

The Week Ahead: The Start of the 'Big One'?