What Religion is Your ISM?

BULLETIN! ISM REPORTS THAT IT APPLIED THE WRONG SEASONAL ADJUSTMENT FACTOR TO MAY DATA. TOTAL SA FAKE NUMBER SHOULD BE 56, NOT 53.2. REAL NUMBER, WHICH IS NEVER REPORTED, IS CORRECT. BUT THAT’S FOR YOU TO FIGURE OUT.

The headline, seasonally adjusted (ugh) ISM index of manufacturing in the US came in at 53.2 for May. Wall Street conomists were looking for 55.6 on average. Oh well missed again. And what’s the deal with seasonally adjusting a survey of purchasing managers asking them whether business was better, worse, or about the same as last month? That’s just whacked.

According to the ISM:

I can think of no rational rationale to adjust this data for anything. The questions are straightforward. Better or worse? This is like going to the optometrist and he or she seasonally adjusts your prescription because the weather is a little warmer in May than at your last appointment in February.

ISM publishes its seasonal adjustment factors for each month at the beginning of the year. Therefore we can back into the actual data. The SA factors are handed down from the Commerce Department based on monthly averages from recent years. If there are some whacked out years in the data, like super weak 2009, or bungee rebound 2010, you get whacked out seasonal adjustment factors. Regardless of the whackedoutedness, actual data is always better than fake data. We just need to look at a picture of it to understand it, with a particular focus on the year to year change and big picture trend.

Instead of looking at a mishmash composite, I like to focus on the one component index that tells us the most about current business conditions and where we might be headed in the short run. That’s new orders. Everything else is secondary.

Note: ISM just posted an update to its official data at 2 PM New York Time. They apparently applied the wrong SA factor to the component indexes in addition to the composite. The original data I posted was therefore also garbage. The update below is with the supposedly correct data.

Here’s the actual data on that (with updated “corrected” data from ISM), and a picture. The New Orders Index for May was 53.5, versus an April reading of 48.5, indicating that in May business was better than in April when it was down a little. This year’s May reading was better than May 2013, but below May 2012 and May 2010. The long term momentum is slowing. Considering the trillion or so that the Fed has pumped into Primary Dealer trading accounts since last May, it’s clear that the “benefits” of that cash haven’t been spreading out into the real economy. 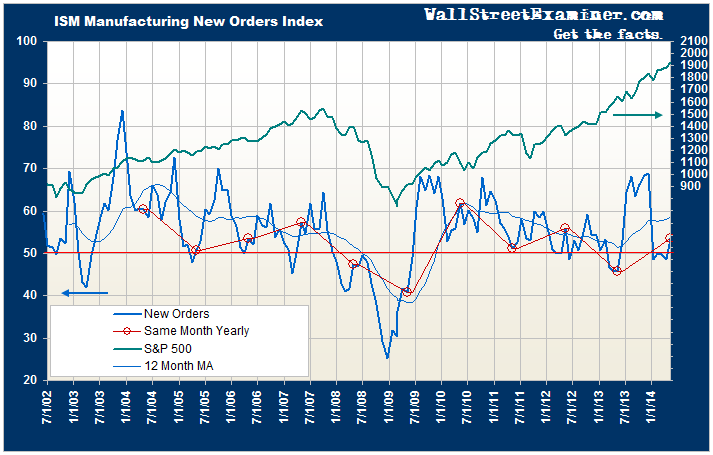 This index has been in a sawtooth declining pattern since the initial bungee rebound of the “recovery” in 2010. In only one year since then has there been a materially positive reading for May. The idea of a US manufacturing renaissance is a farce. But manufacturing only contributes around 11% of total US GDP.

The bulk of the US economy is in services, which the ISM reports on Wednesday. That number ran hot in April, and has stayed positive for most of the past 4 years, so it will be interesting to see if that was sustained in May. The problem with an expanding services economy is that most service jobs are low pay. Workers in service industries are not participating in The Bernanke Effect, the imaginary wealth effect that supposedly trickles down to the majority from gains in the stock market and other miracles of financial engineering which ZIRP/QE promote.

In the final analysis, the ISM data has little to do with the stock market’s direction. Traders react to the number immediately upon release and then the market returns to whatever trend it was on. The market has completely ignored the negative trend in this data since 2010, thanks to the Fed pumping cash into dealer accounts month after month. The disconnect from economic reality continues to grow. The question we must ponder is whether it is more likely that the economy will catch up to the bubble in stock prices, or the bubble will “adjust” back to the reality of the economic trend first.

I think you know the answer.