The Instituto Nacional de Estadistica of Spain has released new data on the Spanish consumer price index. It does not look so good: 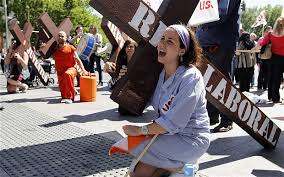 The European Central Bank is supposed to follow a very specific goal which is has set itself more specifically, namely as the ECB writes on its own web pages:

To maintain price stability is the primary objective of the Eurosystem and of the single monetary policy for which it is responsible. This is laid down in the Treaty on the Functioning of the European Union, Article 127 (1).

“Without prejudice to the objective of price stability”, the Eurosystem shall also “support the general economic policies in the Union with a view to contributing to the achievement of the objectives of the Union”. These include inter alia “full employment” and “balanced economic growth”.

The ECB has adopted a specific strategy to ensure the successful conduct of monetary policy. The ECB has defined price stability as a year-on-year increase in the Harmonised Index of Consumer Prices (HICP) for the euro area of below 2%. In the pursuit of price stability, the ECB aims at maintaining inflation rates below, but close to, 2% over the medium term.

So, the problem of deflation has now manifested itself in the fourth largest eurozone economy. Why is deflation bad? Imagine a balance sheet of a business. The business takes out a loan on January 1st, then buys inputs and produces. At the end of the year, output is sold at current prices. With deflation, these prices will have come down. That way, a business buys dear and sells cheap, which obviously eats into profits and is not a sustainable way to run a business at all. How will that business react? Since profits are shrinking it might be tempted to curb supply, thus setting more workers free. This will lead to a fallacy of composition if all business react that way. Nominal income for the workers will have fallen, so that there is even less demand than before, so that the fall in supply will not lead to rising prices. A downward spiral of falling prices, wages and incomes can result. This is the most destructive set up an economy can show on the financial side. It needs to be avoided.