Fed President Plosser, a voting member of the FOMC, indicated in his speech in Helsinki last week that the “hurdle for QE3” is high.  Chairman Bernanke has voiced a similar opinion.  There is considerable ink that has been devoted to the soft patch the U.S economy is current experiencing which almost always includes mention of the Fed’s view that justification for QE3 is more stringent than QE2.  We have been mulling this thought around for a few days and here is the checklist we think is a useful guide to what may trigger QE3.First, labor market conditions need to show a consistent improvement which strongly suggests that the turnaround is durable.  The requirements pertaining to the labor market could be summed up as:  back-to-back declines in the unemployment rate, strong gains in payroll employment, and a declining trend of initial jobless claims.  As charts 1-3 indicate, each one of these criterion were not met after QE1 expired and before QE2 was implemented.  [Shaded regions in all charts represent time periods during which QE1 (December 2008-March 2010) and QE2 have been in place (November 2010-June 2010)] 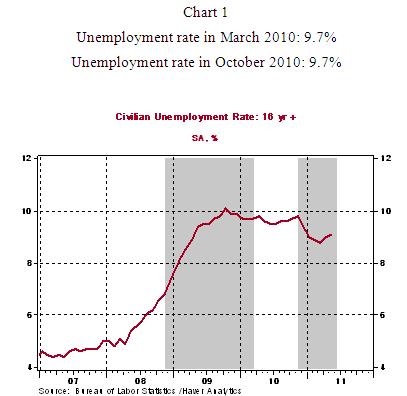 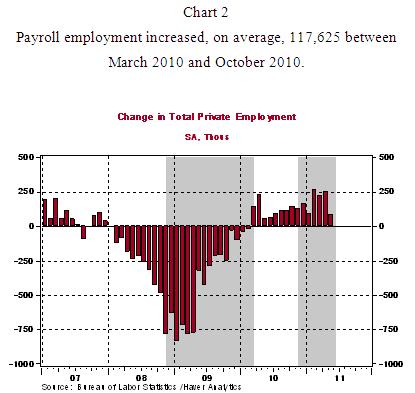 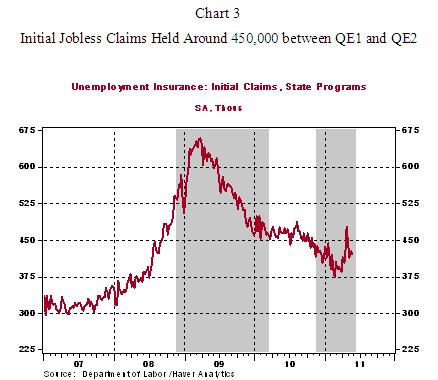 Second, demand in the economy would have to post a noticeable increase to prevent considerations of QE3.  This condition would translate into more robust labor market conditions.  Final sales in each of the quarters between the two quantitative easing programs were tepid (see Chart 4), with the exception of the fourth quarter of 2010 when inventories plunged. 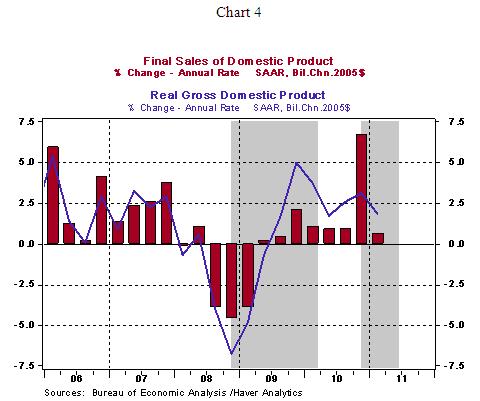 Third, the housing market would have to show a striking improvement in terms of noticeably fewer distress sales and stability of home sales and home prices.  Distress sales made up 37% of existing home sales in April 2011, little changed from March 2010 (35%) and October 2010 (34%).  At present, home sales and starts continue to move around recession lows (see Chart 5).  The spike in existing home sales during the recession and plunge in the recovery period is a temporary swing related to the first-time home buyer credit program.  Mortgage rates and home prices make homeownership affordable, but the support from employment is the missing link.

These are economic indicators that Fed will be tracking, in addition to others, to explain the near term course of monetary policy.  Of other alternatives to stimulate economic activity, eliminating interest on excess reserves is on the top of the list.  Zero interest on excess reserves should urge bankers to consider lending to firms and households which would promote self-sustained economic growth.  Stay tuned for Chairman Bernanke’s comments on the economy and monetary policy tomorrow. 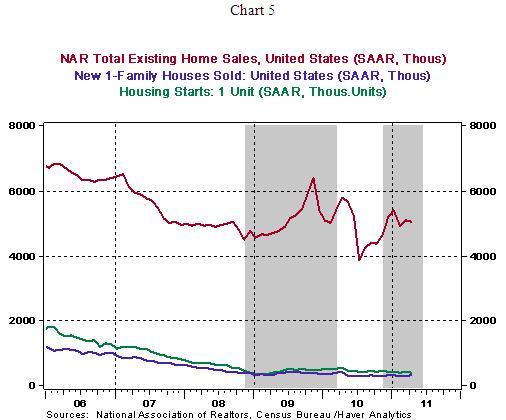 The Great Debate©:  Does QE Prevent Recession or Cause It?  by John Lounsbury

Money and Trading 101  by Stephanie Kelton

The Global Financial Crisis is Not Behind Us  by Steve Keen

The Government has a Printing Press to Produce U.S. Dollars at Essentially No Cost  by Edward Harrison

QE2:  Captainblogain, your Ship is Sinking  by Warren Mosler

De-Financializing the Economy  by Rick Davis

Asha Bangalore is Senior Vice President and Economist at The Northern Trust Company, Chicago. Prior to joining the bank in 1994, she was Consultant to savings and loan institutions and commercial banks at Financial & Economic Strategies Corporation, Chicago. Ms. Bangalore was a faculty member of the Department of Economics, Trinity College, Connecticut, during 1990-1992. She was graduated with a Bachelor of Arts degree from Bangalore University, India. She received Master of Arts and Ph.D degrees in Economics from the University of Connecticut. Ms. Bangalore is a member of the National Association of Business Economists and the American Economic Association.

The Week Ahead: Another Bernanke Press Conference

Greece: No Solution Yet

Greece: No Solution Yet