Guest Author: Stephanie Kelton (See ‘About the Author’ at end of article.)

Editor’s note: This article is based on two blog posts at New Economic Perspectives, which ran under the title “What Happens When the Government Tightens its Belt?” – Part I and Part II.

The laws of accounting allow us to demonstrate that similarly powerful concepts apply to the science of economics. Beginning with the simple identity for GDP in a closed economy, we have:

For economists, this is as obvious as stating that a linear foot is the sum of 12 sequential inches. It simply recognizes that the total amount of money spent buying newly produced goods and services will yield an equivalent income to the sellers of these products. Thus, it demonstrates that expenditures are a source of income.

Once earned, income can be allocated in one of three ways. At the end of the day, all income (Y) will be spent (C), saved (S) or used in payment of taxes (T):

Since they are equivalent expressions for Y, we can set equation [1] equal to equation [2], giving us:

Or, after canceling (C) from both sides and moving terms around:

In the above scenario, the government is balancing its receipts (T) and expenditures (G), and you are balancing your savings and investment spending. There is no net gain/loss.

This should make intuitive as well as mathematical sense, because when Uncle Sam runs a deficit, you receive more financial assets than you lose through taxation. Put simply, Uncle Sam’s deficit lifts you into a surplus position. Moreover, bigger deficits mean bigger surpluses for you.

Finally, let’s see what happens when Uncle Sam tightens his belt. Suppose, for example, that we were able to duplicate the much-coveted surpluses of 1999-2001. What would (and did!) happen to the private sector’s financial position? 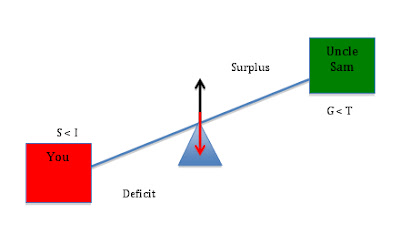 Because the economy’s financial flows are a closed system – every payment must come from somewhere and end up somewhere – one sector’s surplus is always the other sector’s deficit. As the government “tightens” its belt, it “lightens” its load on the teeter-totter, shifting the relative burden onto you.

This is not rocket science, but it appears to befuddle scores of educated people, including President Obama, who said, “small businesses and families are tightening their belts. Their government should, too.” This kind of rhetoric may temporarily boost his approval ratings, but the policy itself will undermine the efforts of the very families and small businesses that are trying to improve their financial positions.

This accounting truism has ruffled the feathers of a flock of readers who have been programmed to launch into an anti-government tirade at the mere mention of the public sector and to regard the dangers of deficit spending as an unimpeachable fact. And while you’re certainly entitled to your own political views, you are not, as Senator Moynihan famously said, entitled to your own facts.

How do the financial flows that occur in an open economy impact the previous discussion of a closed economy?  This questions leads to analysis of the more realistic open-economy in which we actually live.

In an open economy, income flows into and out of the domestic economy as residents and foreigners buy goods and services (exports minus imports), make and receive payments such as interest and dividends (factor income) and make net transfer payments (such as foreign aid). Each country keeps track of these payments using a balance of payments (BOP) account, which summarizes the international monetary transactions that take place between the home country and the rest of the world. The BOP has two primary components – the current account and the capital account – and we can use either one to show whether, on balance, money is flowing into or out of a country.

When we incorporate these international flows, we transform the closed-economy accounting identity used previously:

into the open-economy accounting identity shown below:

To see this in the context of the teeter-totter model, let’s initially hold the public sector’s balance constant at zero (i.e. let’s assume the government is balancing its budget so that G = T). With the government budget in balance, Uncle Sam is a “weightless” entity on the teeter-totter, so that the private sector’s financial position will simply reflect the “weight” of the capital account. Suppose, first, that the current account is in surplus (i.e. the capital account shows an equivalent deficit): 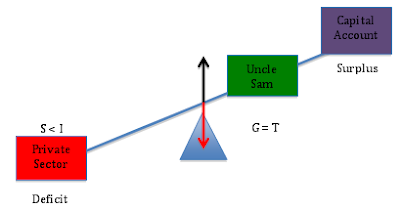 But does this all of this hold true in the real world, or is it some kind of economic chicanery? Let’s check the facts.

Equations [2] and [3] above are not based on economic theory. They are accounting identities that always “add up” in the real world. So let’s firm up the discussion about the implications of government “belt tightening” by running through some examples using the real world data found in the table below (Hat tip to Scott Fullwilir for sharing the file. All of the data comes from the National Income and Product Accounts (NIPA) and the Flow of Funds.)

Let’s begin with the data from 1998 (Q3), when the public sector deficit was just 0.01% of GDP and the current account deficit was 2.56% of GDP. Plugging these numbers into equation [2] above, the identity tells us (and the data in the table confirm) that the private sector’s balance must have been:

To see how a bigger government deficit would have improved the private sector’s financial position, let’s look at the data from 1988 (Q1). As a percent of GDP, the current account balance was 2.59%, nearly the same as before, while the government’s deficit came in at a much higher 4.2% of GDP. We can use Equation [2] to see effect of the larger budget deficit:

In this period, the private sector ends up with a surplus because the government’s deficit was large enough to more than offset the negative effect of the current account deficit.

Again, this is simply a property of the sectoral balance sheet identities. Whenever the government’s deficit is too small to offset a deficit in the current account, the private sector will experience a net loss. The result my ruffle your feathers, but it is an unimpeachable fact.

So let’s go back to President Obama’s comment and the reason I wrote this article in the first place. The President said:

“[S]mall businesses and families are tightening their belts. Their government should, too.”

Wrong! When we tighten our belts, it means that we are trying to build up our savings. We do this by spending less. But spending drives our economy. Sales create jobs. So unless Obama has a secret plan to reverse three decades of current account deficits, the Government needs to loosen its belt when we tighten ours. If it doesn’t, then millions of us will lose our shirts.

Author’s comment: I am aware that I have said nothing about the usefulness of the spending projects, the waste and inefficiency that exists with many government programs, cronyism, inequality, etc., etc. These are legitimate and important questions, but they are not the focus of this analysis. I wrote this series of blogs to try to get people to understand the interplay between the private, public and foreign sectors’ balance sheets. Criticizing me for not addressing a myriad of other issues is like reading Old Yeller and complaining, “What about the cat? You’ve completely ignored the genus Felis!”

The Great Debate©:  Does QE Prevent Recession or Cause It? by John Lounsbury

The Global Financial Crisis is Not Behind Us by Steve Keen

Is a Budget Deficit Necessary for an Economy? by Steven Hansen

Is Ignorance Bliss?  A Look at U.S. Income Inequality by Elliott Morss

From Stimulus to Austerity – What Role for Taxes? by Elliott Morss

Inequality, Leverage and Crisis by Michael Kunhof and Romain Ranciere

Austerity Rather than Stimulus?  Wait a Minute! by Elliott Morss

The New Feudalism by Derryl Hermanutz

Sophie’s Choice for the EU by Dirk Ehnts

Does Germany have to have Net exports to Bail-out the Periphery? by Dirk Ehnts

Fall of the New Monetary Consensus by L. Randall Wray

The Eurozone in Bad Need of a Psychiatrist by Stefano Micossi

Eurozone – Caught in a Financial – Sovereign Web by Clive Corcoran

The Rough Politics of European Adjustment by Michael Pettis

Stephanie Kelton is Associate Professor of Economics at the University of Missouri-Kansas City, Research Scholar at The Levy Economics Institute and Director of Graduate Student Research at the Center for Full Employment and Price Stability.  Her research expertise is in: Federal Reserve operations, fiscal policy, social security, health care, international finance and employment policy.  She writes at New Economic Perspectives.  Full bio is available here.