Econintersect: Sales of existing homes have been increasing in 2012, data well documented by articles at GEI Analysis and Calculated Risk.  The following graph from Calculated Risk shows a sharp upturn in Existing Home Sales over the most recent three months. 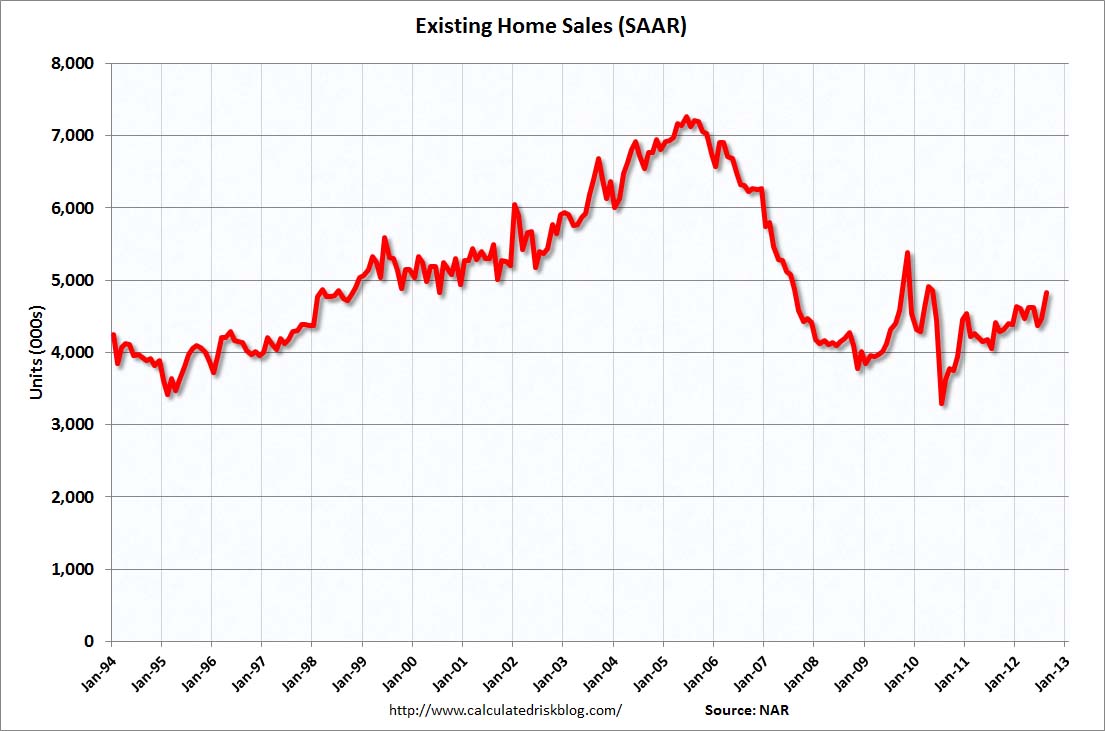 There has been a lot of optimism that this represents the start of an improving housing market.  However it is not clear from the graph above that the uptick is any more than a fluctuation within a pattern ongoing for the last couple of years.  It will take more time to determine what is actually happening.

However, there is some news today (20 September 2012) that sheds a little less enthusiasm on what might be (or might not be) an improving housing market.

AnnaMarie Andriotis (in Market Watch) reports some specific numbers from Capital Economics, and independent research firm.  They report that nearly 18% of contracts signed in the past three months have been canceled.  That is much higher than the pre-crisis norm of 10% but less than the all-time high of 23% seen in May 2010.

36% of Realtors are reporting some kind of problem with a contract, including cancellations, delays and renegotiations of the sales terms, according to August data by the National Association of Realtors. That’s up from 30% earlier this year.

This information certainly creates some questions about the level of commitment or the capability to finance a home purchase.  In a market with buyers not willing or not able to follow through on contracts the strength on any move could fade quickly.

Prices have been rising along with higher slaes numbers.  In the graph of median prices below, Red is NAR (National Association of Realtors, Green is Corelogic and Blue is from Case-Shiller.

In the past recent past (2009 -2012) NAR prices have shown larger swings up from lows than have the other two sources a total of four times, although the latest divergence appears clearly larger than the three previous.

If this “rally” in home sales and prices is to have legs, both prices and volumes must make higher highs and lower lows. If either price or volume fail to make a higher low this winter, the fickleness of the buyer contract follow-through may have been the early warning.

It appears it will take some time before it will be known if the bottom for homes sales has really occurred or if there is any lasting significance of the unusual levels of contract cancellations.

Markets Close Up From Morning Lows

Markets Close Up From Morning Lows