In a display of considerable flexibility on the battlefield, the Islamic State managed to take rebel forces in northern Aleppo by surprise with a large-scale offensive aimed at securing more territory along the Syria-Turkey border. After drawing down its forces in the area, the Islamic State’s sudden tactical shift resulted in considerable initial gains against the rebels.

Islamic State fighters seized Sawran and are advancing near Mare. But thanks to reinforcements from Aleppo city and other provinces, Syrian rebel forces have already begun to mount powerful counterattacks against the Islamic State. For now, the outcome of the battle hangs in the balance as both sides move to bolster their ranks.

The Battle for Aleppo

The Islamic State’s advance in northern Aleppo is likely driven by its growing concern over its supply lines running through Turkey, which provide the vast majority of the group’s foreign recruits. Over the past year, offensives by the Free Syrian Army and Kurdish People’s Protection Units have steadily eroded the Islamic State’s control over border posts and towns on the Turkey-Syria border. Over the past week, the Euphrates Volcano outfit, which is affiliated with the Free Syrian Army, openly targeted the Islamic State-held town of Tal Abyad in northern Raqaa province. With the Kurdish People’s Protection Units advancing from al-Hasaka province in the east and Euphrates Volcano attacking from Aleppo province to the west, Tal Abyad could slip from the Islamic State’s grasp. The Islamic State has even reportedly begun evacuating its fighters’ families from the town, moving them southward toward Raqaa city. 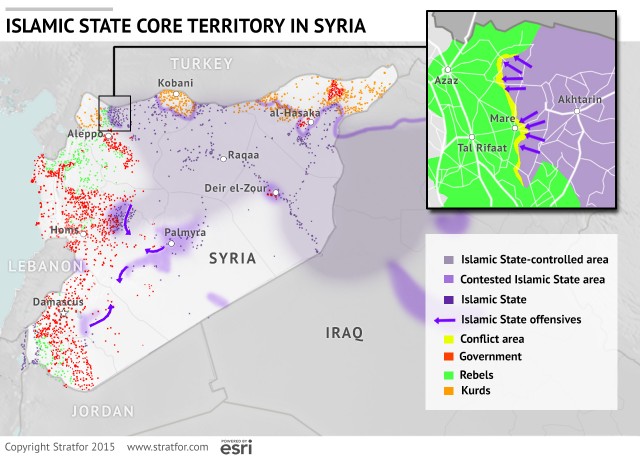 The Islamic State has fought long and hard to prevent the loss of northern Raqaa to Syrian rebel and Kurdish forces. However, the group has realized that fighting these forces over open terrain when they are backed by heavy coalition air support is unsustainable in the long run. Having learned its lesson from the battle for Kobani that stubbornness in pursuit of a failing strategy results in losses, the Islamic State has begun focusing its efforts on the portions of Syria that the U.S.-led coalition will not cover with air support.

The border of northern Aleppo province, west of the Euphrates River, represents a logical target for the Islamic State. Not only is it the sole border segment still safely under the group’s control, but it is also a region that is largely held by Islamist rebel factions. Because many of these factions are affiliated with Jabhat al-Nusra, it is less likely that the U.S.-led coalition would provide air support to this territory. The Islamic State’s concerns over supply lines into Turkey and rebels’ preoccupation with loyalist forces in the region further motivate the group to concentrate its efforts on Aleppo.

A Boon for Damascus

The Islamic State’s attack against northern Aleppo also serves the interests of the Syrian government in two ways. First, it has forced Syrian rebels to delay an impending offensive against loyalist forces in the province. Over the past few months, the Aleppo front has been relatively quiet, and rebels in the region have been gearing up for an assault on government-held positions in and around the city. It is possible this attack would have been timed with a similar offensive by rebels in Daraa in the country’s south. Furthermore, loyalist positions in Aleppo are weakly reinforced at the moment because their supply lines have been threatened and Damascus has prioritized other fronts. Since the rebels now have to postpone or cancel their planned attack to address the growing Islamic State threat, the group’s advance comes as a much-needed reprieve for loyalist troops in Aleppo.

Second, the Islamic State’s push into Aleppo has prompted Jaish al-Fatah, the rebel group responsible for repeated victories against government forces in Idlib province, to reallocate a considerable number of its fighters to the Aleppo front to reinforce their beleaguered allies. In light of emerging reports that the Islamic State has captured a number of families of Ahrar al-Sham fighters, who make up one of the leading subgroups within the Jaish al-Fatah organization, it is all the more likely that Jaish al-Fatah rebels will turn much of their attention toward the Islamic State in northern Aleppo, a windfall for hard-pressed loyalist units in Idlib province that were being pummeled by the rebels.

While the diversion of rebel forces to Aleppo has clear benefits for the Syrian government, it is facing problems of its own stemming from Islamic State activities in other areas of the country. Following the Islamic State’s capture of Palmyra, the group is now advancing perilously close to the key government-held city of Homs. Islamic State fighters in the region are also moving to cut off and possibly assault the T4 air base, one of the government’s most important air bases and one that is critical to air operations over eastern and central Syria.

The Islamic State is quickly proving to be a major threat to both rebel and loyalist forces in Syria. Having long devoted the majority of their fighters and efforts to battles against each other, rebel groups and Damascus are becoming increasingly aware that they cannot afford to let the Islamic State take advantage of the country’s internal conflict to assault and seize weakly held territory. This is particularly true as the group converges on important populated areas such as Aleppo or even Homs and Damascus, where it previously had no substantial presence.

Though the Islamic State certainly faces some critical threats of its own, including rebel and coalition efforts to cut off its supply lines through Turkey, the group is still able to maintain its momentum in a number of areas. Each new base, town or supply depot that it secures only boosts its foothold in Syria’s civil war, which in turn translates into gains across the border in Iraq. The Syrian government and disparate rebel forces must now dedicate more of their attention to the Islamic State threat as it becomes an increasingly important factor in their battle plans and objectives.

“How Islamic State Victories Shape the Syrian Civil War” is republished with permission of Stratfor.

More Than 6.6 Million US Homes At Risk Of Hurricane Storm Surge Damage In 2015. Total Reconstruction Cost Value For All Homes Is Nearly $1.5 Trillion.

More Than 6.6 Million US Homes At Risk Of Hurricane Storm Surge Damage In 2015. Total Reconstruction Cost Value For All Homes Is Nearly $1.5 Trillion.