China: every day, the media reports disquieting news. We hear that China is in recession, pulling down all other emerging countries with it, stock markets crashing, currency manipulations, et al.  Some fact checking is in order.

There are concerns about the accuracy of China government data. For that reason, I have supplemented data from the Chinese National Bureau of Statistics with data collected by the United Nations Conference on Trade and Development (UNCTAD) and FocusEconomics. The latter derives much of its data (consensus forecasts) from private banks and other financial entities that report regularly on China.

As Table 1 suggests, China’s growth over the last 40 years. And it has been truly remarkable. Over that time, it has averaged a compound annual GDP growth rate of 10%. This was propelled by an even more impressive growth in exports averaging around 15% over the same period. That meant an increase in GDP per capita from $308 in 1980 to $7,975 in constant dollars. I am not a historian, but I do wonder if any country has been able to increase the economic well-being of its people by so much in such a short time. 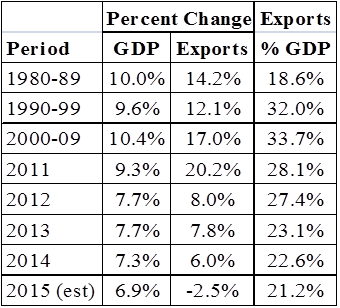 For many years, the US and Germany competed to be the leading exporter. That has changed. As Table 2 indicates, China is now the largest exporter. In addition, South Korean exports have grown rapidly and US export growth has also remained impressive. 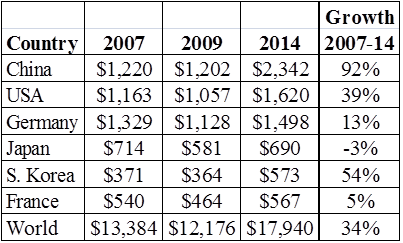 However, China is now in a transition and export growth is slowing. The export “era” is giving way to providing goods and services for a growing and increasingly prosperous middle class. Initially as the stimulus from export growth slackened, the government made up the difference with large infrastructure investments that bode well for the country’s future. This can in part be inferred from the declining export share of GDP (Table 1).

In all likelihood, there will be “bumps” in the transition. But China has an impressive cadré of professionals in place that will not be stymied by feuding politicians as often happens in the US.

Nevertheless, the financial media continues to express concern over China. Some claim it is perilously close to going into a recession. A recession? It is worth keeping in mind that while China is not growing as rapidly as it has in the past, its projected annual growth in real GDP still exceeds 6%.

a. The “Achilles Heel”

China is a resource poor country. That is why its imports have been growing when measured in dollars at least through 2014.

At the recent UN Environmental summit in Paris, it promised its CO2 emissions will stop growing by 2030 and to make best efforts to peak earlier. It said it would increase non-fossil energy to 20% of its energy consumption by 2030, which will require it to install 800 to 1,000 gigawatts in non-fossil capacity, equivalent to the entire current US generating capacity. China has also committed to build a national cap and trade system on carbon emissions. This will launch in 2017 and become the world’s largest.

China has not done this out of a concern for global warming damage. Instead, its people have expressed anger over growing pollution in cities and because it wants to reduce energy imports. And as part of this effort, it is investing in nuclear plants as if there is no tomorrow. It is also gunning to become the largest producer of increasingly efficient solar panels.

b. The “Ripple Effects”

Since 2007, the IMF’s growth rate for what it classifies as “Emerging Market” countries excluding China fell from 8.7% in 2007 to 5.2% in 2012 and to a projected 2.3% in 2015. Many pundits trace this back to China’s declining demand for their products (commodities in particular). Table 3 compares GDP growth rates for emerging market countries excluding China with that of China. Growth in China, while declining, has been substantially above growth in the other Emerging Market countries throughout the period.

What matters most here are what has happened to China’s import growth. Varying estimates of China imports are given in Table 4. They all show a sharp decline in the rate of growth starting in 2012. Perhaps the most reliable is the FocusEconomics‘ estimates. Its consensus predicts an actual export decline of 2.5% in 2015.

A lack of demand from China has been used to explain the lackluster economic performance in both Argentina and Brazil. Table 4 gives these countries’ GDP growth rates and exports to China in recent years. Exports to China grew in Argentina until 2013 and in Brazil until 2014. Certainly the slowdown in China’s demand contributed to slowing economic performance of both countries, but there is clearly more going on.

In recent months, high volatility and lower prices have been news highlights from China and have caused concern worldwide. Using the Shanghai stock exchange as an example, the stock market index (SHCOMP:IND) reached 5117 in June, a rise of 54% since January. Currently, it has fallen back to 2740, to a more modest decline of 19%.

This means most of what is happening on the Chinese stock markets is only affecting wealthy Chinese and offshore investors.

US politicians repeatedly take China leaders to task for currency manipulations. They claim the Chinese want to keep their currency cheap relative to the dollar to spur exports. Once again, facts are of relevance. Since 2008, the Yuan has strengthened from 8.28 to the dollar to 6.58 now meaning it China exports are now 20% more expensive to dollar buyers.

China is still growing rapidly. Among major economies, only India has a higher growth rate. And unlike China, India has not yet constructed the infrastructure it will need for its growing middle classes.

Chinese is transitioning from being export-led thru infrastructure-led to being a domestic consumption-led economy. There will be bumps in the road. But over the last 30 years, Chinese leaders have done a masterful job. Party leaders know their survival depends on satisfying its 1 billion+ people.

China is also a resource poor country. It needs food, energy and other products from abroad. And because it is so large, the ebb and flow in these demands has a significant impact on other economies. Unlike the US (and its regrettable democracy promotion program), China has no interest in promoting its form of government elsewhere. It needs to be on good terms with all nations for trade and other reasons.

An interesting final question remains to be discussed in a later article: how long will China be able to run a positive trade balance?

Insider Trading 29 January 2016: Insiders Sold Almost 10 Times As Much Stock As They Purchased

Insider Trading 29 January 2016: Insiders Sold Almost 10 Times As Much Stock As They Purchased