Growing up in a Chinese village, Julian Zhu only saw his father a couple of times a year when he came back for holidays from his strenuous job in a textile mill in southern Guangdong province.

For his father’s generation, factory jobs were a lifeline out of rural poverty. For Zhu, and millions of other younger Chinese, the low wages, long hours of menial labour, and the risk of injuries are no longer sacrifices worth making. 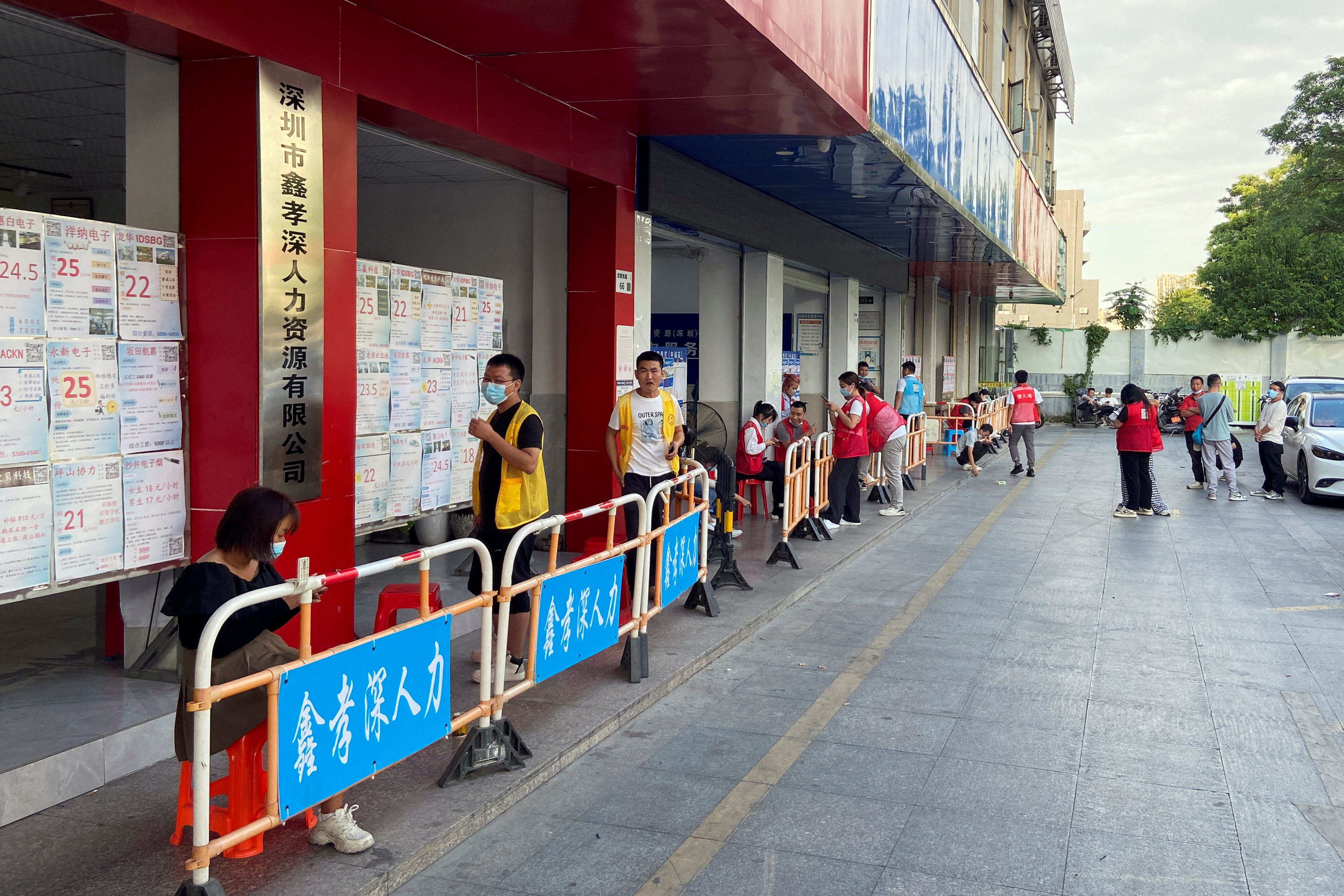 “After a while that work makes your mind numb,” said the 32-year-old, who left the production lines a few years ago and currently earns a living selling milk formula and doing scooter deliveries for a supermarket in Shenzhen, China’s southern tech hub. “I couldn’t stand the repetition.”

The rejection of grinding factory work by Zhu and other Chinese in their 30s and 20s is causing an intensifying labour shortage that is frustrating manufacturers in China, which manufactures a third of the goods consumed across the world.

Factory chiefs say they would produce more, and faster, with younger people replacing their ageing workforce. But offering the higher pay and improved working conditions that younger Chinese want would risk destroying their competitive advantage.

And smaller manufacturers say big investments in automation technology are either costly or unwise when soaring inflation and borrowing costs are choking demand in China’s major export markets.

Over 80% of Chinese manufacturers were hit by labour shortages ranging from hundreds to thousands of workers in 2022, equivalent to 10% to 30% of their workforce, according to a survey by CIIC Consulting. China’s Ministry of Education projects a shortage of about 30 million manufacturing workers by 2025, greater than Australia’s population.

On paper, labour is in no short supply: nearly 18% of Chinese aged 16-24 are jobless. In 2022 alone, a cohort of 10.8 million graduates joined a job market that, besides manufacturing, is very subdued. China’s economy, hit by COVID-19 curbs, a property market slowdown and regulatory crackdowns on tech and other private industries, faces its weakest growth in decades. 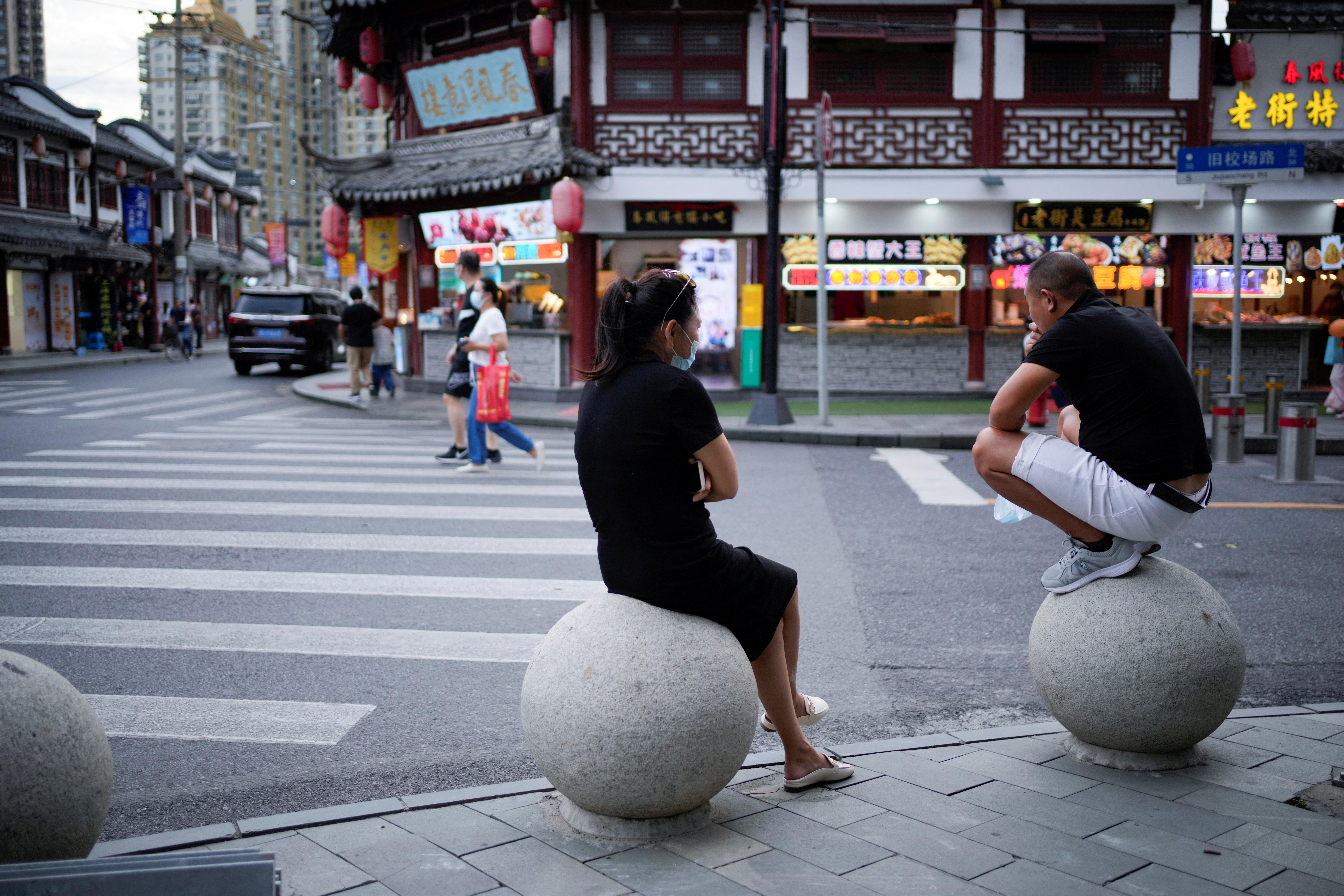 Klaus Zenkel, who heads the European Chamber of Commerce in South China, relocated to the region about twenty years ago, when university graduates were below one-tenth of this year’s numbers and the economy as a whole was almost 15 times smaller in current U.S. dollar terms.

He manages a factory in Shenzhen with nearly 50 workers who build magnetically shielded rooms used by hospitals for MRI screenings and other procedures. Zenkel said China’s rapid economic growth in recent years had raised the hopes of younger generations, who now see his line of work as increasingly unappealing.

“If you are young it’s much easier to do this job, climbing up the ladder, doing some machinery work, handling tools, and so on, but most of our installers are aged 50 to 60,” he said. “Sooner or later we need to get more young people, but it’s very difficult. Applicants will have a quick look and say ‘no, thank you, that’s not for me’.”

China’s macroeconomic management agency, the National Development and Reform Commission, and the education and human resources ministries would not respond to requests for comment.

Manufacturers say they have three major options to address the labour-market mismatch: invest more in automation; sacrifice profit margins to increase pay; or hop on the decoupling wave sparked by the escalated rivalry between China and the West and shift to cheaper pastures such as India or Vietnam.

But all those alternatives are difficult to achieve.

Liu, who heads a factory in the electric battery supply chain, has invested in more-developed production equipment with better digital measurements. He said his older workers strain to keep pace with the faster gear, or read the data on the screens.

Liu, who like other factory bosses refused to provide his full name so he could speak freely about China’s economic downturn, said he tried attracting younger workers with 5% higher pay but was given a cold shoulder.

“It’s like with Charlie Chaplin,” said Liu, giving details of his workers’ performance, referring to a scene in the 1936 movie “Modern Times”, about the anxieties of U.S. industrial workers during the Great Depression. The main character, Little Tramp, played by Chaplin, fails to keep pace with tightening bolts on a conveyer belt.

Chinese policymakers have highlighted automation and industrial upgrading as a fix to an ageing workforce. The country of 1.4 billion people, on the verge of a demographic downturn, comprised half of the robot installations in last year, up 44% year-on-year, the International Federation of Robotics said.

But automation has its limitations. 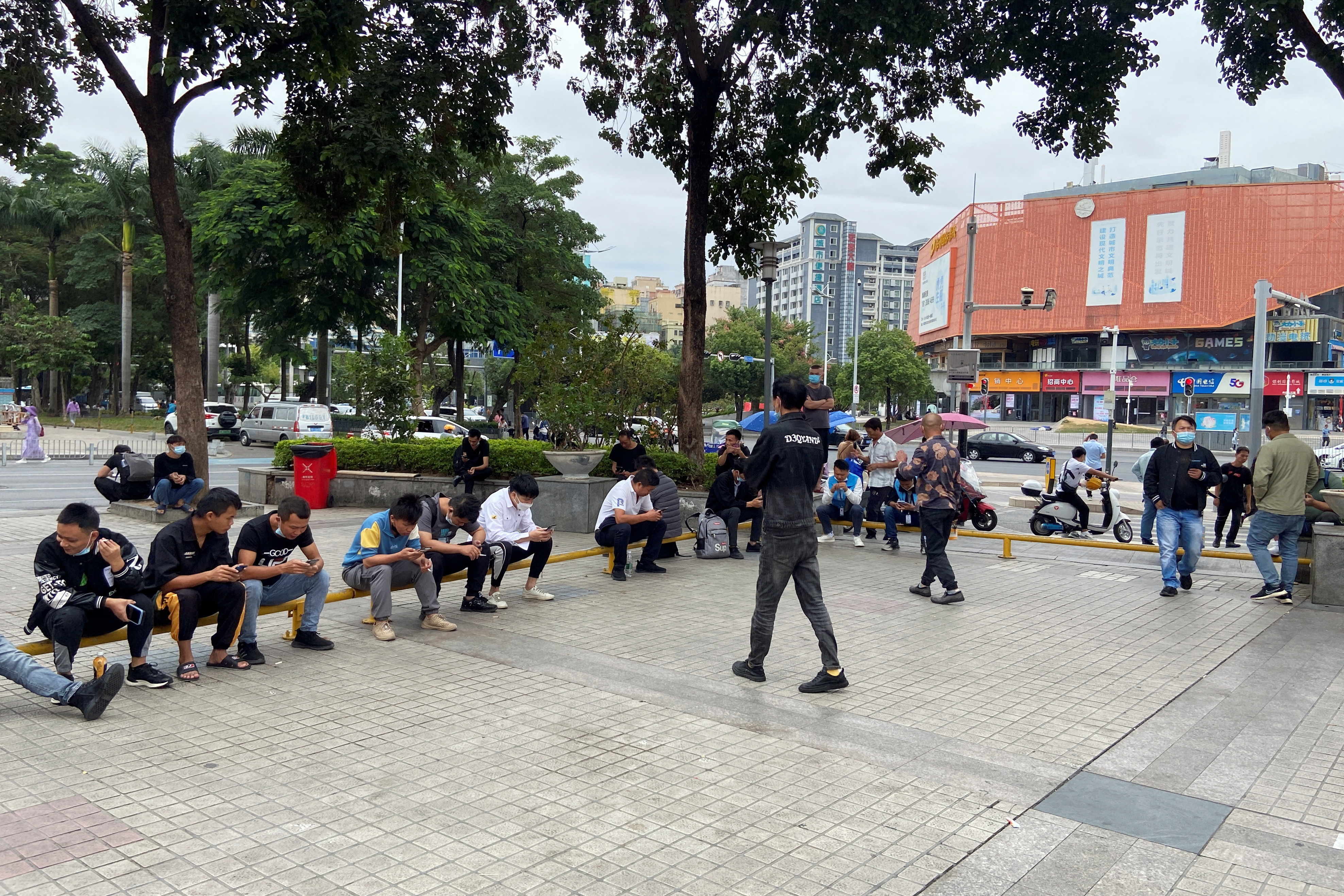 Dotty, a general manager at a stainless-steel treatment plant in the city of Foshan, has automated work surface cleaning and product packaging, but says a similar solution for other functions would be too expensive. Yet young workers are crucial for production to carry on.

“Our products are really heavy and we need people to transfer them from one processing procedure to the next. It’s labour intensive in hot temperatures and we have difficulty hiring for these procedures.”

Brett, a manager at a factory producing video game controllers and keyboards in Dongguan, said orders have reduced by half in recent months, and that most of his peers were relocating to Thailand and Vietnam.

He is “just thinking about how to survive this moment,” he said, adding he planned to fire 15% of his 200 workers even as he still needed younger muscles on his assembly lines.

The competitiveness of China’s export-oriented manufacturing sector has been increased over several decades on state-subsidized investment in low labour costs and production capacity.

The protection of that status quo is now conflicting with the aspirations of a generation of more-educated Chinese for a more comfortable life compared to the sleep-work-sleep daily grind for tomorrow’s meal their parents went through.

Instead of settling for jobs under their education level, a record 4.6 million Chinese applied for postgraduate studies in 2022. There are 6,000 applicants for each civil service job, state media reported in November. 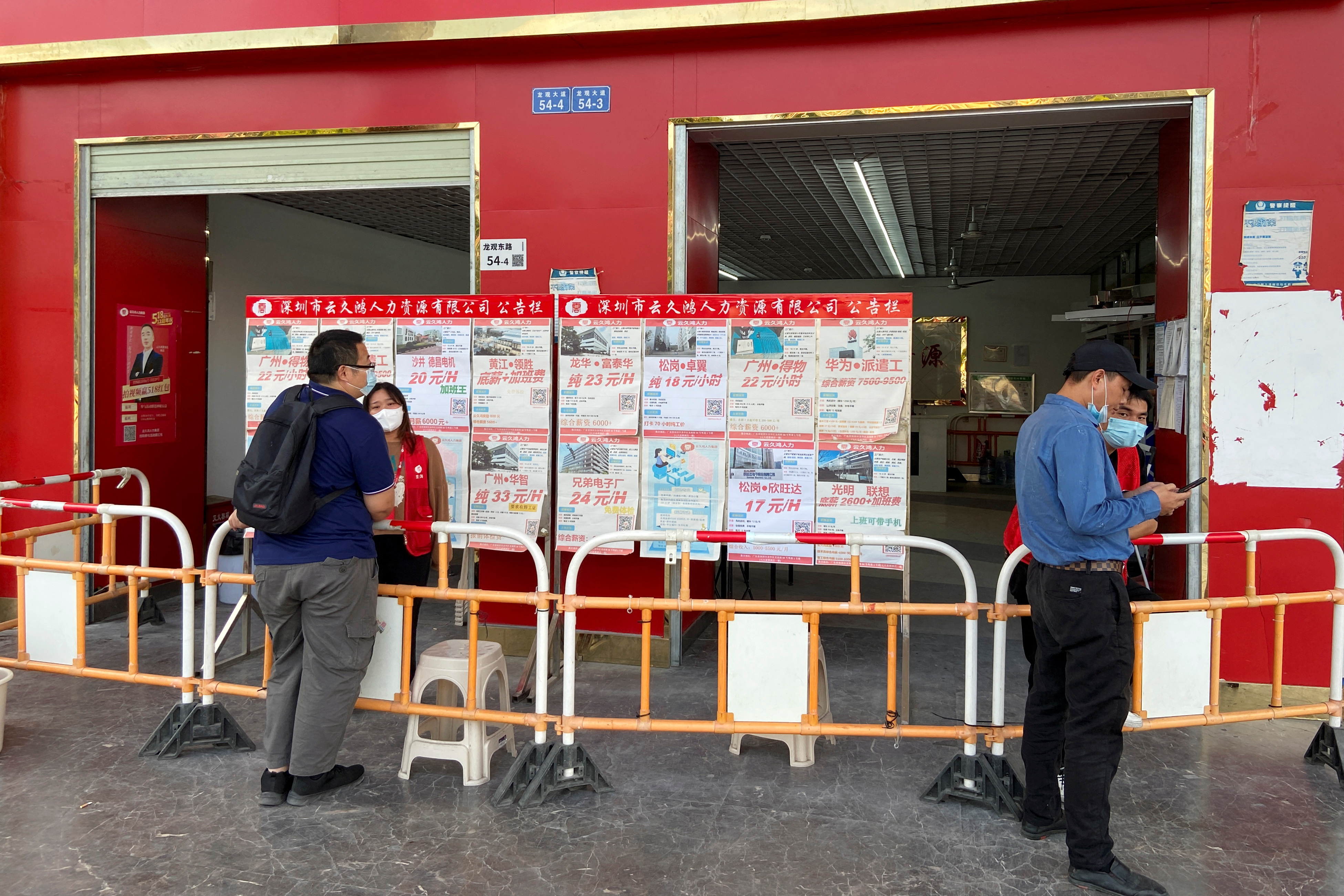 “The unemployment situation for young people may have to be much worse before the mismatch could be corrected,” said Zhiwu Chen, professor of finance at the University of Hong Kong.

By 2025, he said, there may not be much of a labour shortage “as the demand will for sure go down.”

Zhu’s first occupation was to screw fake diamonds into wristwatches. After that, he got a job in another factory, molding tin boxes for mooncakes, a traditional Chinese bakery product.

Now doing sales and deliveries, he makes at least 10,000 yuan ($1,421.04) a month, based on how many hours he puts in. That’s almost twice what he would make in a factory, though some of the difference goes on accommodation, as most factories have their own dorms.

“It’s hard work. It’s dangerous on the busy roads, in the wind and rain, but for younger people, it’s much better than factories,” Zhu said. “You feel free.”

Xiaojing, 27, currently makes 5,000 to 6,000 yuan a month as a masseuse in a high-end area of Shenzhen after three years at a printer factory where she earned 4,000 yuan a month.

“All my friends who are my age left the factory,” she said, adding that it would be difficult to get her to go back.