Election Violence In November? Here’s What The Research Says

After Kenya’s 2007 election, as incumbent President Mwai Kibaki declared victory, the opposition alleged the election had been rigged.

A wave of protests, riots and ethnic violence followed. As many as 1,500 citizens were killed and another 600,000 forcibly displaced.

As the U.S. presidential election draws near, many have expressed concern that a similar scenario may unfold here. Some envision President Donald Trump’s supporters using misinformation to mobilize vigilante militias to clash with leftist protesters. Others envision that groups on the left will refuse to accept the results and mobilize, leading to violence and deaths across the country. 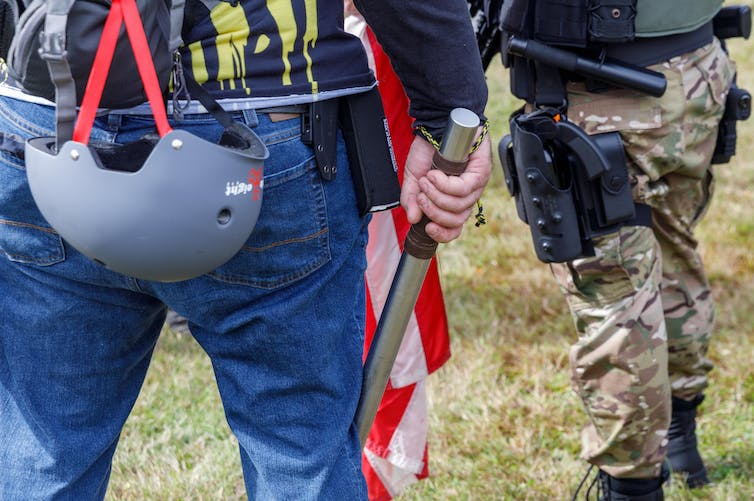 A man carrying a club is seen as the Proud Boys, a right-wing pro-Trump group, gather with their allies in a rally against left-wing Antifa in Portland, Oregon, Sept. 26, 2020. John Rudoff/Anadolu Agency via Getty Images

Having a contested election in times of crisis, however, is by no means a guarantee of violence. The front-runners in the 2017 French presidential election, for example, were as politically polarizing as their U.S. 2020 counterparts, with centrist candidate Emmanuel Macron calling right-wing leader Marine Le Pen’s party racist and xenophobic and Le Pen charging that Macron was “the candidate of savage globalisation.”

And the first round of voting in France took place just after a shooting in the heart of Paris sent the country into a state of emergency. Yet, as the votes were counted and Macron was declared the winner, Le Pen conceded defeat, allowing for a peaceful transition.

With the barrage of 24/7 media coverage of the upcoming U.S. election, it can be hard to tell what’s real and what’s not – and that can be frightening. It’s important to step back and ask: What does the research say about the likelihood of election-related violence in November? 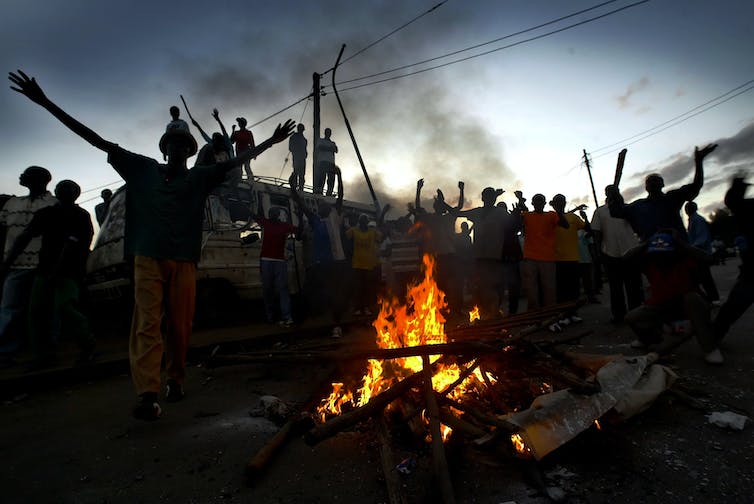 When social science researchers like me try to predict political violence, we look at a large number of historical cases across multiple countries, and try to identify which events have resulted in many casualties.

In taking this approach, we can systematically evaluate what explains these extreme events, pinpointing specific issues that were present in most of the situations, and avoiding the inaccuracies that can happen by relying too much on anecdotal stories.

Such studies have highlighted three factors relevant to the upcoming election.

First, strong political institutions are especially effective in reducing the risk of violence. Many have voiced concerns that President Trump has weakened American political institutions. But as one of the world’s longest-enduring democracies, the United States and its democratic institutions have proven their capacity to maintain order through crises and abuse of presidential power before.

In the U.S., for example, despite allegations to the contrary, electoral fraud is extremely rare. Even if uncertainty and chaos were to ensue in the wake of the election, the authority to decide a winner is vested in an independent institution such as the U.S. Supreme Court or by the House of Representatives. Kenya in 2007 had no comparable institutional anchors to help ensure post-election stability.

Second, research, including my own, finds that mass political violence usually happens in countries that have no capacity to prevent it. In Kenya, for example, most violence was perpetrated by unofficial militias affiliated with ethnic or religious groups, such as the Mungiki, which the government was unable – or unwilling – to curb.

In the U.S., if any political leader calls for vigilantes to mobilize, both the federal government and states have the capacity to expeditiously eliminate this threat. Militias may be armed, but they are no match for a well-trained National Guard or Army regiment. This should help deter the risk of violence by vigilantes.

Some, however, fear that the president will send federal agencies to seize ballots. Although military officers continue to express formal commitment to keeping the military nonpoliticized, such actions, if taken, may result in a violent backlash by left-wing vigilantes. But federal agents acting under orders from the White House will have the tactical upper hand in such clashes, which greatly adds to their deterrent capacity.

Finally, an especially strong predictor of election violence is a history of armed political conflict. After the 2016 elections, America experienced massive protests and some rioting, but little in the way of deadly political violence. 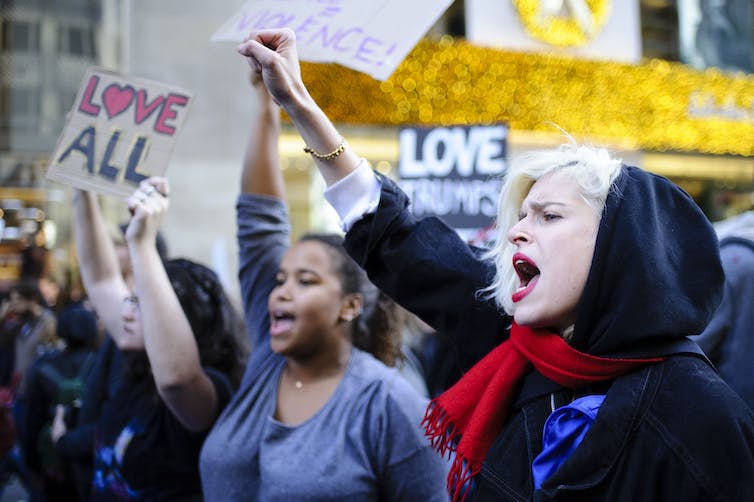 What the numbers say

Is post-election violence impossible in 2020 America? No.

However, data suggests it is unlikely.

Ninety-five percent of the 12,607 political demonstrations in the U.S. between May 24 and Sept. 19, 2020, were peaceful. There were 351 other kinds of incidents, including imposing curfews and perpetrating physical attacks. In 29 of those, there was violence against civilians, where 12 people were killed, nine of them by the police. And in an additional five drive-by shootings, three police officers were killed by the extremist group the Boogaloo Bois.

Considering the number of people involved in the recent Black Lives Matter and COVID-19 protests, and the fact that many were heavily armed, these casualty figures are surprisingly low. According to the data, the majority of deaths were caused by police, not vigilantes or protesters, and all of the perpetrators (with the exception of two drive-by shooters), police and civilians alike, were taken into custody.

Like the U.S., France experienced protests and riots, in addition to multiple terrorist attacks, prior to Election Day. There was even a government plan to handle the potential violence and instability that might ensue if Le Pen were elected. And yet, as the most polarizing elections in decades concluded, there were few riots and no killing. 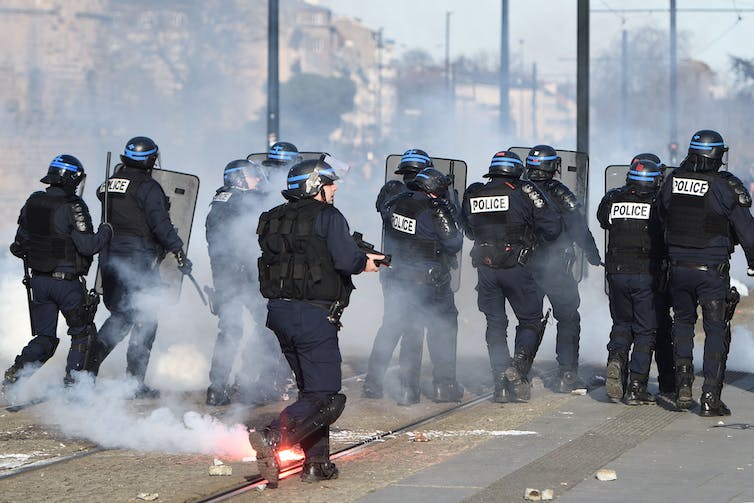 French riot police clash with protesters at a demonstration against the presidential candidate for the far-right Front National party, Feb. 25, 2017 in Nantes. Jean-Sebastien Evrard/AFP via Getty Images

So, what will happen in November?

Researchers cannot perfectly predict political violence. Their analyses rely on the past.

Add to the equation a notoriously unpredictable incumbent against a backdrop of unprecedented social and economic conditions, and making accurate predictions about potential post-election bedlam is impossible, as much as scholars and others may try.

While I think some concern is valid, it is important to remember that there is a big difference between using a call to arms to mobilize your voters and instill fear in the other party’s supporters, and staging a post-election insurrection, which could subject its instigators to charges of sedition, if not high treason.

Ultimately, the three factors discussed here suggest that fears of widespread violence by vigilantes and activists during and after Election Day should be treated as fears, not as a probable outcome.

LIVE: Current Weather And Forecasts Up To 7 Days – Wednesday September 30, 2020

LIVE: Current Weather And Forecasts Up To 7 Days - Wednesday September 30, 2020