Market historians have pored over stock charts from the late 1920s, attempting to show that share prices danced closely in step with the political ups and downs of the Smoot Hawley bill as it moved through Congress. The law, which raised tariffs on more than 20,000 imported items, was enacted in June 1930 – close enough to the October 1929 Crash to suggest a causal connection.

However, because we are currently witnessing the effects of tariff-war fears on the markets in real time, we can see the fallacy of this idea. Indeed, a portfolio manager would be committing professional suicide if he or she tried to shift allocations using tariff-related news as a timing device. On Thursday, for instance, after shares had risen robustly that day, an analyst purported to explain it with the following claptrap:

“The markets are now beginning to see through the bluster of negotiations and they’re dialing back some of their most significant fears of a full on trade war.”

Unfortunately for this clown, and for Wall Street’s media shills at Bloomberg, MSNBC et al. who are paid to take clowns seriously, especially bullish clowns, stocks went into a steep dive just hours later, triggered by hawkish remarks on trade made by Trump during a speech in West Virginia. 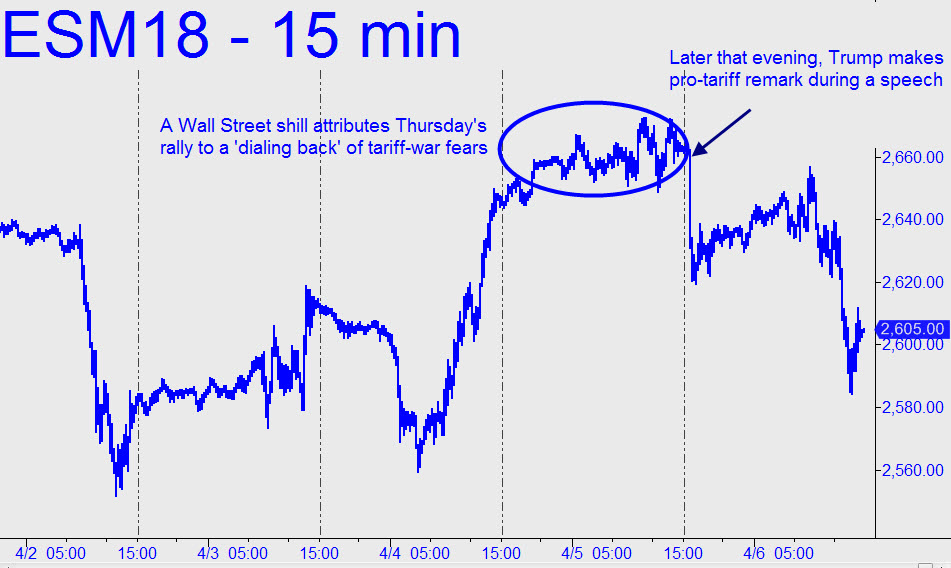 In the months and years ahead, we are certain to see many more violent swings in the stock market, some of which will appear to correlate with Trump’s latest pronouncement on tariffs. Unfortunately, it seems all too plausible that any such volatility will be in the context of an epochal bear market. When it happens, let’s remind ourselves that it is not tariff talk per se that has caused the swings, a bear market or a Second Great Depression; but rather, broad cyclical changes in the collective social mood.

Bob Prechter, the world’s great expert on this subject, would say the stock market’s recent difficulties reflect the strong possibility that such a tectonic mood change is occurring. One telltale sign is that the public, rather than being outraged by scandals, obsessively seeks them. However, regardless of any thumbs-up signs we get from Wall Street, even with stocks bounding toward new all-time highs, we must realize that all is not right with the world. If the stock market seems for long stretches not to care about this, each of us should understand that shares are too juiced up with funny money to know any better.

That isn’t to say the broad averages could not achieve new record highs in the months ahead. But if they do, we should allow for the possibility that this is just a flight of fancy – a reflection of shifting moods that can be as capricious and empty-headed as changing tastes in food, fashion, entertainment and, of course…politics.

If you don’t subscribe but want to join in the fun, click here for a two-week free trial to Rick’s Picks, including access to a 24/7 chat room that draws great traders from around the world.

Why Safe Spaces At Universities Are A Threat To Free Speech

Why Safe Spaces At Universities Are A Threat To Free Speech