Following the Taliban’s rapid taking of power in what it describes as a reestablished “Islamic Emirate of Afghanistan,” fears of a certain kind of Islamist ideology being brought back have led a large number of Afghans to flee, or fear for their lives.

The Taliban were known for their oppressive rule. They ruled Afghanistan from 1996 to 2001, at which point they were pushed out of power by U.S. and British troops. Under the Taliban rule, religious minorities and other Muslims who did not share their fundamentalist understanding of Islam were not tolerated. The Taliban also severely restricted the rights of women and girls.

As scholars who research ethno-religious conflicts in South Asia, we have studied the origins of the Taliban’s religious beliefs. The roots of this ideology – Deobandi Islam – can be traced to 19th century colonial India. 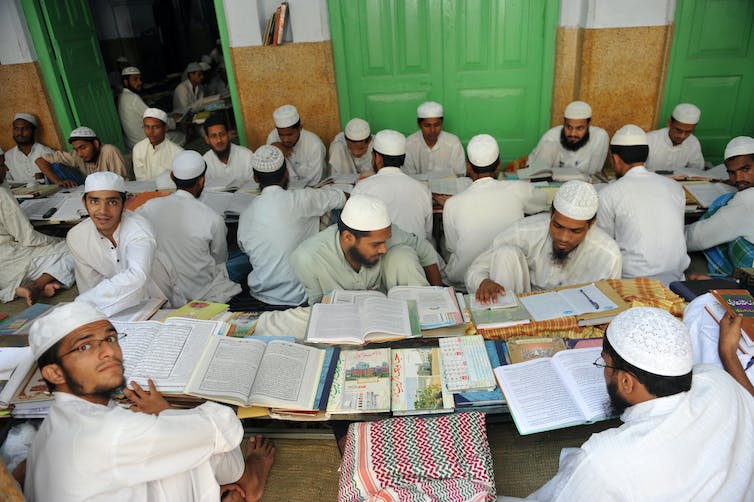 Students on the campus of Darul Uloom, the Deoband school of Islam located in a small town, Deoband, in the northern Indian state of Uttar Pradesh. Sajjad Hussain/AFP via Getty Images

Deobandi Islam emerged in India in 1867, 10 years after a major Indian nationalist uprising against the rule of the British East India Company.

Two Muslims clerics, Maulana Muhammad Qasim Nanautawi and Maulana Rashid Muhammad Gangohi, were behind the setting up of the Deobandi school. Their aim was to indoctrinate Muslim youth with an austere, rigid and pristine vision of Islam. At its heart, Deobandi Islam was an anti-colonial movement designed to revitalize Islam.

This school of Islamic thought had a very particular understanding of the faith. The Deobandi brand of Islam adheres to orthodox Islamism insisting that the adherence to Sunni Islamic law, or sharia, is the path of salvation. It insists on the revival of Islamic practices that go back to the seventh century – the time of the Prophet Muhammad. It upholds the notion of global jihad as a sacred duty to protect Muslims across the world, and is opposed to any non-Islamic ideas.

The first madrassa – or Islamic school – to educate Muslim youth in the Deobandi tradition was set up in the north Indian state of present-day Uttar Pradesh toward the end of the 19th century.

The Deobandi school system spread over the next several decades and attracted Muslim youth in different parts of the Indian subcontinent. For instance, the Deobandi tradition became the most popular school of Islamic thought among the Pashtuns, an ethnic group living in an area on either side of the Afghanistan-Pakistan border.

Pashtun leaders played an instrumental role in establishing and expanding the Deobandi curriculum and tradition in the Pashtun belt across the Durand line, the colonial border separating British India from Afghanistan.

After British India was partitioned in 1947 between India and Pakistan, many prominent Deobandi scholars migrated to Pakistan, setting up a large number of madrassas.

With the independence of India and Pakistan, the school placed its full attention on training the students within this fundamentalist Islamic tradition.

In the years and decades after the independence of Pakistan, Deobandi madrassas spread across Pakistan, and one of their principal causes of political activism became India’s treatment of Muslims in the Indian-controlled portion of Jammu and Kashmir.

According to one estimate, by 1967 there were as many as 8,000 Deobandi schools worldwide and thousands of Deobandi graduates mainly in India, Pakistan, Bangladesh, Afghanistan and Malaysia.

The CIA’s covert involvement in the war fueled Islamic militancy and inadvertently helped organize and orchestrate a resistance movement mostly composed of ardent religious fighters. A substantial number of these Afghan fighters were drawn from the Deobandi madrassas, especially the Pashtuns, who played a leading role in the resistance. 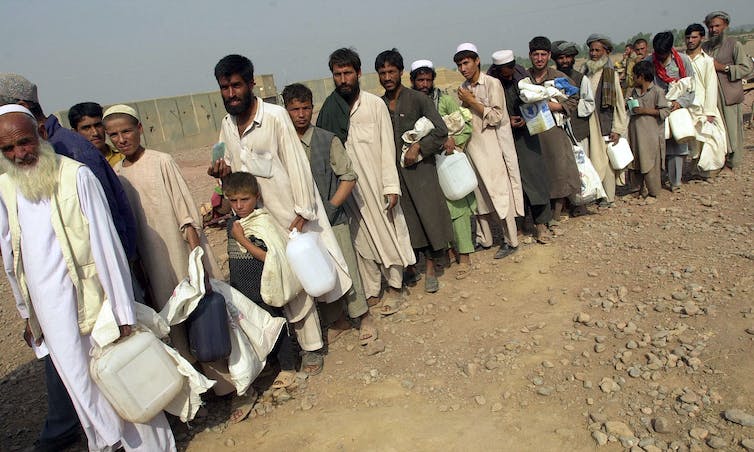 Afghans have fled upheaval in their country for more than 40 years, often landing in refugee camps in Pakistan. Chris Hondros/Getty Images

Following the Soviet invasion in Afghanistan in 1979, millions of Afghan refugees, in several waves, took shelter in Pakistan, especially in its Pashtun belt.

Keen on obtaining a strategic toehold in Afghanistan, Pakistan actively recruited young men in refugee camps, imbuing them further with religious zeal to fight the Soviets.

Driven out of their homes in Afghanistan, the dispossessed young Afghans thrived in the refugee camps, in part due to ties of ethnicity as Pashtuns. Drawn to a religiously based offensive against what they deemed to be an infidel, or foreign occupier, they became ready recruits to the anti-Soviet cause.

Many of the Taliban’s key leaders and fighters, including Mullah Omar, the founder of the organization, had studied in the Deobandi seminaries in both Afghanistan and Pakistan.

After the civil war

After the Soviets withdrew from Afghanistan in 1989, the fighters continued to enjoy the support of Pakistan’s security establishment and private actors for financial assistance.

When Afghanistan plunged into a civil war in 1992, various factions of the anti-Soviet resistance vied for power. Among them was the Northern Alliance, a group that India and Russia had backed and was under the leadership of an ethnic Tajik, Ahmed Shah Massoud, who resisted the Taliban and acquired an almost mythic status.

However, as scholar Larry P. Goodson writes, with the crucial and substantial assistance of Pakistan’s security establishment, the Taliban emerged victorious and seized power in 1996.

Once in power, they imposed their distinctive brand of Islam on the country – far removed from its religious roots in colonial India.

[3 media outlets, 1 religion newsletter. Get stories from The Conversation, AP and RNS.]

How The Government Can Afford Its Promise To Pay