The Aching Blue: Trauma, Stress And Invisible Wounds Of Those In Law Enforcement

Steve has served as a police officer for 24 years, including being a SWAT team member for years. He and I have worked together on his traumatic experiences. He has told me that in a given day a police officer might have to deal with two to three overdoses and do CPR.

He told me in one session:

“What you see is someone lying on the ground, with things coming out of their mouth. Imagine trying to help them while their family is screaming and begging you to do it ‘quicker, quicker.’ Sometimes you cannot bring them back, and you witness families mourning someone they love. On the same day you come across a traffic stop where teenagers are actively shooting heroin into their arms, and you have to deal with an overdose situation again.”

“The most traumatic are the ones you cannot save people.”

Steve remembered a train accident scene where he noticed the driver’s “complete brain” on the back seat of the car. A similar experience happened the next day at a suicide scene where someone had shot themself in the head.

I am a trauma expert who works with traumatized civilians, victims of torture and human trafficking, refugees and first responders. These days are tough for our nation, including those who work in law enforcement, because of the recent terrible incidents of police shooting, and contentious politicization of the law enforcement. 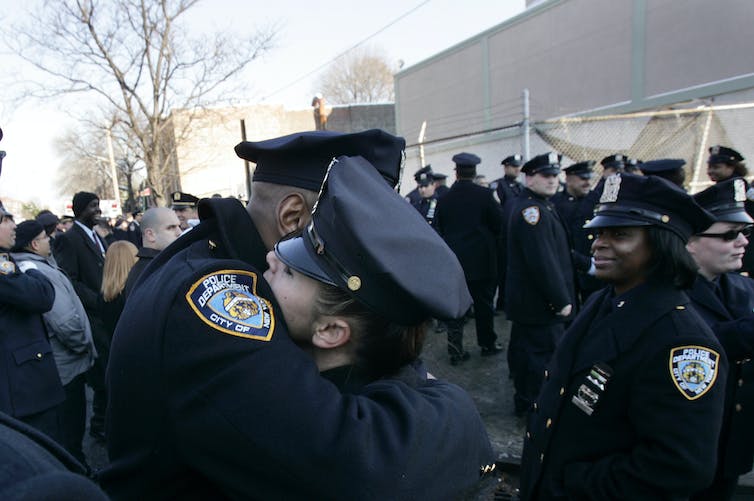 The nation is finally expressing intolerance for unjustifiable brutality, racism, and suffering caused by some in law enforcement. At the same time, I hope to also shed light on the tough experiences that cops and other first responders experience. I believe empathy is the key to mutual understanding. 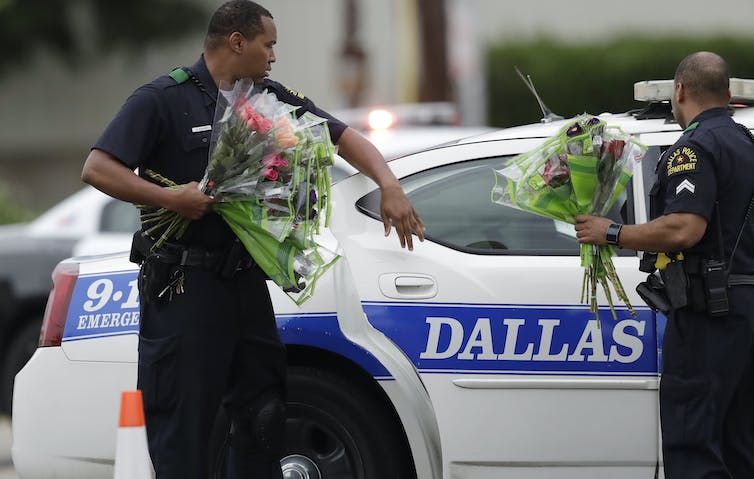 Dallas police officers handle flowers they received at a roadblock outside their headquarters July 9, 2016, two days after five Dallas officers were killed by a gunman. AP Photo/Eric Gay

Stress and trauma among first responders

Steve’s stories echo those I have heard from other law enforcement officers, emergency medical staff, and firefighters. They are regularly exposed to serious injury, death, immediate threat to themselves, their colleagues and civilians, and very stressful decision-making situations. While people may have heard more about trauma in veterans, they may be less aware of first responder trauma. Others might think post-traumatic stress disorder happens only to those who were directly traumatized.

However, PTSD also happens in those who witness trauma: exposure to violent crimes or serious accidents, or their aftermath. These events deeply affect the day-to-day lives of first responders, including the police. In one study published in 2013, about 80% of officers reported seeing dead bodies or severely assaulted victims in the past year.

The trauma can become cumulative for those in this line of work, or those who are repeatedly exposed to trauma for other reasons. Such cumulative trauma among first responders – and groups like veterans, refugees, and victims of human trafficking – worsens the negative impact, and may impede recovery. 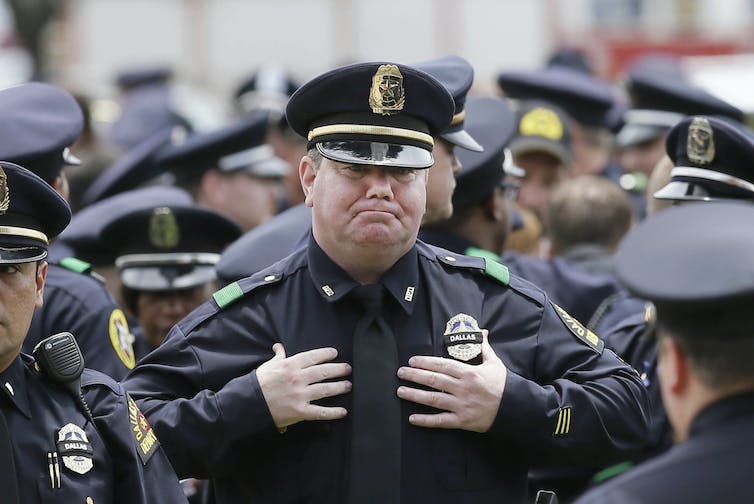 A Dallas police officer composes himself at the conclusion of an honor guard presentation for slain Dallas Police Officer Michael Krol after a funeral in Plano, Texas. Krol was one of five police officers killed in Dallas by a lone gunman July 7, 2016. AP Photo/LM Otero

PTSD is only one consequence of trauma exposure, which switches the brain to fight-or-flight mode, and quick survival-related decision-making. The brain is always on alert, trying to prevent recurrence of trauma. Those with PTSD experience nightmares, flashbacks, intrusive memories, anger, insomnia, avoidance of any reminder of trauma, and social withdrawal, among other symptoms. Approximately 15% of the police officers in the U.S. and globally experience symptoms of PTSD. Numbers can be much higher based on exposure, such as after natural disasters or tragedies like 9/11.

Police officers show not only high levels of PTSD, but also depression, anxiety and suicide. More police officers and firefighters die by suicide than in line of duty, and unfortunately the number of suicide deaths among the police seems to be rising. While many others might not meet all the criteria for PTSD, they still suffer from some symptoms such as insomnia, nightmares and isolation.

The challenges and the solutions

There are challenges specific to addressing trauma in the police and first responders, such as the stigma, and the “tough men/women” mentality. By nature, this job requires authority and control, and some officers, or their superiors, see vulnerability or seeking help as weakness.

The truth, however, is that all humans are vulnerable. We are not made to have such horrific experiences on a regular basis. Based on our unique biology and the severity and repetition of trauma, many of us will feel an impact; this is just how the human body and brain react to trauma and stress.

Part of the blame is on us medical and mental health experts because we sometimes might create a perception that a condition such as PTSD is a label the person has to live with forever. Denial is often a response to believing the illness is one’s new identity.

Steve once told me that what he found most empowering in our first visit was when I said “We can fix this.” I was being honest with him; we can help a lot. One does not have to forever suffer the impact of trauma on their mental health, body (higher level of obesity, chronic pain and fatigue, and cardiovascular disease), career and family life.

We have effective interventions for trauma and stress. Psychotherapy helps with learning adaptive ways of coping with stress, freeing memories from intense negative emotions, and not having to avoid safe situations (such as going to their kid’s games), and redefining the meaning of traumatic experience. Medications help with insomnia, nightmares and flashbacks, and reduce the intensity of negative emotions, allowing use of the rational brain in stressful situations.

Steve and I worked together for some time. Steve is now enjoying work and family life again, and we just catch up once in a while. He now leads a peer-to-peer team that provides support and education to other officers after critical incidents, and mental health referral when needed.

If you are a first responder reading this and feel the weight of your tough experiences on your mind, or are losing sleep to nightmares, please reach out, call your doctor, employee assistance program or a mental health expert; you and your family deserve to be happy. We can fix this.