Widely watched monthly reports that were released this past week included the Retail Sales Report for August and the Business Sales and Inventories report for July, both from the Census bureau, the August Industrial Production and Capacity Utilization report from the Fed, and the August report on New Residential Construction from the Census Bureau.

In addition, the Bureau of Labor Statistics released the Regional and State Employment and Unemployment report for August, a report which breaks down the two employment surveys from the monthly national jobs report by state and region….while the text of this report provides a useful summary of this data, the serious statistics aggregation can be found in the tables linked at the end of the report, where one can find the civilian labor force data and the change in payrolls by industry for each of the 50 states, the District of Columbia, Puerto Rico, and the Virgin Islands.

This week also saw the release of the first two regional Fed manufacturing surveys for September: the Empire State Manufacturing Survey from the New York Fed, which covers New York, northern New Jersey and Puerto Rico, reported their headline general business conditions index rose from +3.7 in August to +17.0 in September, suggesting a faster pace of growth for First District manufacturers, while the Philadelphia Fed Manufacturing Survey for September, covering most of Pennsylvania, southern New Jersey, and Delaware, reported their broadest diffusion index of manufacturing conditions fell from +17.2 in August to +15.0 in September, suggesting a slightly slower growth rate among that region’s manufacturers.

Seasonally adjusted retail sales rose 0.6% in August after retail sales for July were revised lower…the Advance Retail Sales Report for August (pdf) from the Census Bureau estimated that our seasonally adjusted retail and food services sales totaled $537.5 billion during the month, which was up 0.6 percent (±0.5%)* from July’s revised sales of $534.6 billion and 2.6 percent (± 0.7 percent) above the adjusted sales in August of last year…July’s seasonally adjusted sales were revised down from the $536.0 billion reported last month to $534.6 billion, while June sales were revised 0.1% higher, from $529.4 billion to $529.962 billion, with this release….estimated unadjusted sales, extrapolated from surveys of a small sampling of retailers, indicated sales actually fell 0.9%, from $550,941 million in July to $545,890 million in August, while they were up just 0.1% from the $545,247 million of sales in August a year ago…the revision to June’s sales means that 2nd quarter sales were more than $2.2 billion higher at an annual rate than was previously reported, which would be enough to add 0.03 percentage point to 2nd quarter GDP when the 3rd estimate is published at the end of the month…

Included below is the table of the monthly and yearly percentage changes in retail sales by business type taken from the August Census Marts pdf….the first double column below gives us the seasonally adjusted percentage change in sales for each type of retail business from July to August in the first sub-column, and then the year over year percentage change for those businesses since last August in the 2nd column; the second pair of columns gives us the revision of last month’s July advance monthly estimates (now called “preliminary”) as revised in this report, likewise for each business type, with the June to July change under “Jun 2020 (r)evised”, and the revised July 2019 to July 2020 percentage change in the last column shown…for your reference, our copy of the table of last month’s advance July sale estimates, before this month’s revision, is here…. 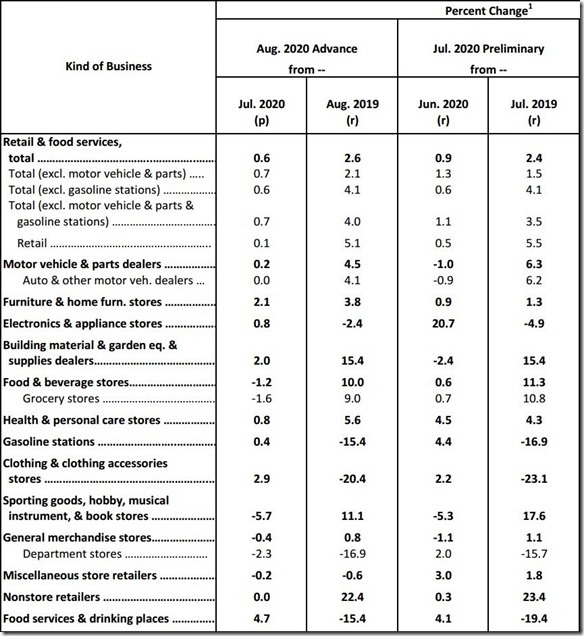 To compute August’s real personal consumption of goods data for national accounts from this August retail sales report, the BEA will use the corresponding price changes from the August consumer price index, which we reviewed last week….to estimate what they will find, we’ll start by pulling out the usually volatile sales of gasoline from the other totals…from the third line on the above table, we can see that August retail sales excluding the 0.4% increase in sales at gas stations were also up by 0.6%….then, subtracting the figures representing the 1.2% decrease in grocery & beverage store sales and the 4.7% increase in food services sales from that total, we find that core retail sales were virtually unchanged month over month…since the August CPI report showed that the the composite price index of all goods less food and energy goods was 1.0% higher in August, we can thus figure that real retail sales excluding food and energy, or real core PCE, will show a decrease of about 1.0% for the month…however, the actual adjustment in national accounts for each of the types of sales shown above will vary by the change in the related price index…for instance, while nominal sales at motor vehicle & parts dealers were up 0.2%, the August price index for transportation commodities other than fuel was 2.1% higher, which would suggest that real sales at auto & parts dealers were about 1.9% lower once price increases are taken into account… similarly, while nominal sales at clothing stores were 2.9% higher in August, the apparel price index was 0.6% higher, which means that real sales of clothing likely rose by about 2.3%…and in the lone case where August’s prices for a major goods category fell, we see that sales at drug stores were up 0.8% while prices for medical care commodities were 0.1% lower, which suggests that real sales at drug stores rose 0.9%…

In addition to figuring those core retail sales, to make a complete estimate of real July PCE, we should also adjust food and energy retail sales for their price changes separately, just as the BEA will do…the August CPI report showed that the food price index rose 0.1% in August, as the price index for food purchased for use at home fell 0.1% while the index for food bought away from home was 0.3% higher…thus, while nominal sales at food and beverage stores were 1.2% lower in August, prices were 0.1% lower, which means that real sales of food and beverages would be roughly 1.1% lower…on the other hand the 4.7% nominal increase in sales at bars and restaurants, once adjusted for 0.3% higher prices, suggests real sales at bars and restaurants rose by 4.4% for the month…meanwhile, while sales at gas stations were up 0.4%, there was a 2.0% increase in the retail price of gasoline, which would suggest real sales of gasoline were on the order of 1.6% lower, with a caveat that gasoline stations do sell more than gasoline, and we haven’t accounted for those other sales…by averaging those estimated real sales figures with a sales appropriate weighting, and excluding food services, we’d estimate that the income and outlays report for August will show that real personal consumption of goods fell by about 1.1% in August, after rising by a revised 1.3% in July and by a revised 5.8% in June, after rising by 14.4% in May, after falling by 12.5% in April and by 0.7% in March…at the same time, the 4.4% increase in real sales at bars and restaurants will have a positive impact on the order of +0.3% on August’s real personal consumption of services.

The August report on New Residential Construction (pdf) from the Census Bureau estimated that the widely watched count of new housing units that were started during the month was at a seasonally adjusted annual rate of 1,416,000, which was 5.1 percent (±9.6 percent)* below the revised July estimated annual rate of 1,492,000 housing unit starts, but was 2.8 percent (±10.3 percent)* above last August’s pace of 1,279,000 housing starts a year…the asterisks indicate that the Census Bureau does not have sufficient data to determine whether housing starts actually rose or fell from July or even over the past year, with the figures in parenthesis the most likely range of the changes indicated; in other words, August’s housing starts could have been up by 4.5% or down by as much as 14.7% from those of July, with a 10% chance that the actual change could have even been outside of that wide range…in this report, the annual rate for July housing starts was revised from the 1,496,000 reported last month to 1,492,000, while June’s housing starts, which were first reported at a 1,186,000 annual rate, were revised up from last month’s initial revised figure of 1,222,000 annually to 1,265,000 annually with this report….

Those annual rates of starts reported here were extrapolated from a survey of a small percentage of US building permit offices visited by Census field agents, which estimated that 127,300 housing units were started in August, down 8.5% from the 139,100 units started in July…of those housing units started in August, an estimated 93,200 were single family homes and 32,400 were units in structures with more than 5 units, up from the revised 93,100 single family starts in July, but down from the 45,300 units started in structures with more than 5 units in July…

The monthly data on new building permits, with a smaller margin of error, are probably a better monthly indicator of new housing construction trends than the volatile and often revised housing starts data…in August, Census estimated new building permits were being issued for a seasonally adjusted annual rate of 1,470,000 housing units, which was 0.9 percent (±1.4 percent)* below the revised July rate of 1,483,000 permits, and was 0.1 percent (±1.5 percent)* below the rate of building permit issuance in August a year earlier…the annual rate for housing permits issued in July was revised from 1,495,000 to a rate of 1,483,000 annually….

Again, these annual estimates for new permits reported here were extrapolated from the unadjusted estimates collected by canvassing census agents, which showed permits for roughly 125,500 housing units were issued in August, down from the revised estimate of 135,400 new permits issued in July…the August permits included 89,600 permits for single family homes, down from 92,100 in July, and 31,200 permits for housing units in apartment buildings with 5 or more units, down from 39,100 such multifamily permits a month earlier…

For more graphs and commentary on this report, see the following two posts by Bill McBride at Calculated Risk: 8:38 AM Housing Starts decreased to 1.416 Million Annual Rate in August and Comments on August Housing Starts.

After the release of the August retail sales report, the Census Bureau released the composite Manufacturing and Trade Inventories and Sales report for July (pdf), which incorporates the revised July retail data from that August report and the earlier published July factory data and last week’s July wholesale trade report to give us a complete picture of the business contribution to the economy for that month….according to the Census Bureau, total manufacturer’s and trade sales were estimated to be valued at a seasonally adjusted $1,441.1 billion in July, up 3.2 percent (±0.2%) from June’s revised sales, but down 1.2 percent (±0.4 percent) from July’s sales of a year earlier…note that total June’s sales were concurrently revised up from the originally reported $1,394.0 billion to $1,396.2 billion with this report, which is now an 8.6% increase from May….manufacturer’s sales were up by 4.6% to $479,530 million in July, and retail trade sales, which exclude restaurant & bar sales from the revised July retail sales reported earlier, rose 0.5% to $482,372 million, while wholesale sales rose 4.6% to $479,151 million…