There are diseases and health conditions that are essentially invisible to us until it is too late.

When those problems are life-threatening, such as cancer, and if there is a period when something could be done, then those are instances where an effective screening strategy could prevent illness and save lives.

Once an individual tests positive for one of the “breast cancer” genes, called BRCA1 and BRCA2, then screening – mammograms and MRI – and prevention – surgery and medicines – can be used to reduce risk of disease and improve outcomes. In this case the risk is not just for breast cancer; these genes also raise the risk for ovarian, prostate and pancreatic cancer.

Perhaps just as important as the actions to encourage screening and prevention in the person who gets the news, is the opportunity to alert family members. Parents, siblings and adult children all have a 50-50 risk for the carrying the same gene change and might benefit from knowing of the positive screening results. That’s because when one family member tests positive all close relatives should also consider testing. With BRCA1 and BRCA2 women have higher personal cancer risk, but all have increased cancer risks. 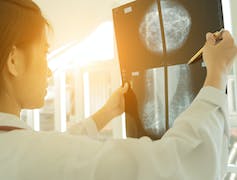 A mammogram is an x-ray that allows a qualified specialist to examine the breast tissue for any suspicious areas. Chompoo Suriyo/Shutterstock.com

I helped lead a recent study of 50,000 people in Pennsylvania whose DNA had been collected and tested for disease-causing versions of the breast cancer genes BRCA1/2. We discovered that some 267 people carried such genes. But what surprised us was that only 18 percent of these people were already aware of this.

This study highlights the fact that our current approaches to finding individuals with the cancer risk associated with BRCA1 and BRCA2 miss the majority of individuals who carry those genes, and further research into the use of DNA-based screening is needed if we are to address the missed opportunities to intervene.

The value of genetic testing

There are lots of ways to screen. As part of standard primary care, physicians check blood pressure and recommend carrying out colonoscopies on nearly everyone over 50 years old. High blood pressure is invisible, but if not addressed can lead to increased strokes and heart attacks. Polyps in the colon are not visible without a colonoscopy or similar study, and if not removed early some will progress to colon cancer.

In 2013 I left Harvard Medical School to join Geisinger Health System in Pennsylvania, where we saw a unique opportunity to explore ways to use genetic testing in standard primary care to improve the health of the average person. In early 2014, Geisinger announced a research collaboration with Regeneron Pharmaceuticals to work together on discovering disease-causing genes and new targets for drug therapies. This project relied on tens of thousands of patient volunteers choosing to link their electronic health records to their DNA code for research. This allowed researchers to carefully study the combined DNA code and health care records to identify harmful genetic changes that raised the risk of particular disorders, and as well as protective genetic changes that lowered them. 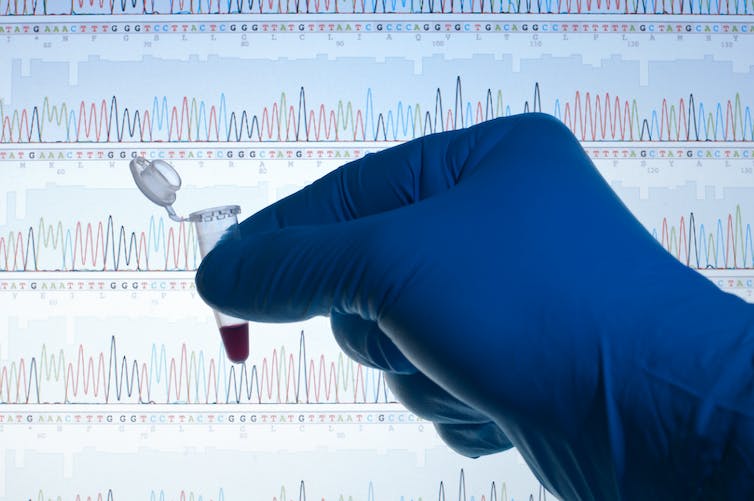 The BRCA gene test is a blood test that uses analysis of DNA to identify harmful mutations in either one of the two breast cancer susceptibility genes – BRCA1 and BRCA2. damerau / Shutterstock/com

Among the Geisinger leadership team, a group of us recognized the opportunity to give something back to these volunteers by using DNA code as the basis for a screening program. The screening was designed to identify genetic variations in the volunteer’s DNA that might increase their risk of disease and that health care providers could do something about, and then deliver a report to the patient and their physician. In May of 2015 we delivered our first result, and there is now a well-structured system set up to deliver care based on this kind of result to thousands of Geisinger patients who volunteered for the project. Now at Yale, I co-authored the recent paper that reported results from one of the most important projects from my time at Geisinger and is a template for some the work we will do here in Connecticut.

Over the last 20 years, screening strategies to identify risk related to disease-associated changes in the breast cancer genes BRCA1 and BRCA2 have been developed. Those strategies have focused on the predictive value of family history of cancer.

A lot of careful research has proven that a strong family history of cancer greatly increases the likelihood of a related person having disease causing variations in one of their genes, and the brave public stories of affected people has helped us all to appreciate that connection.

We also know that family histories don’t always get discussed in enough detail to alert someone that they need to get tested. Then there are those who have DNA changes that increase their risk of disease but are unaware because they fortunately don’t have the family history.

Our study showed that of 50,000 people in Pennsylvania whose DNA had been tested as part of the MyCode project for BRCA1/2 genes, 267 people carried such genes but only 18 percent were already aware of this. The other 82 percent were learning it for the first time through the DNA-based screening strategy that we applied. 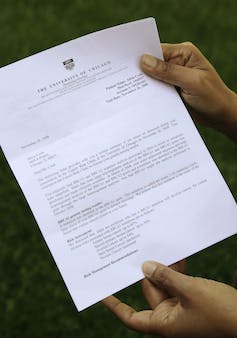 Breast cancer survivor Alicia Cook holds a letter from the University of Chicago informing her that test results showed she had the BRCA genetic defect linked to breast cancer. AP Photo/M. Spencer Green

It’s important to note that not all of these 267 individuals will develop cancer. However, among the volunteers who had died prior to the completion of the study, almost half had developed a BRCA-associated cancer.

In contrast, far fewer of those alive at the end of the study had developed a BRCA1- or BRCA2-associated cancer, suggesting that we have opportunities to intervene with those we have identified.

Early warning provides the chance to apply proven cancer prevention and early detection strategies for those who are now aware of their risk. While long-term follow-up is needed to document how successful this is, we have already detected a number of early cancers that we hope will result in better outcomes for those individuals.

In the decades ahead, medical researchers will work out the details of using DNA-based screening to understand risk, not only for cancer, but for all kinds of health risks. That information can be used to improve people’s lives by prevention of cancer, heart disease and other diseases. Although we are in the early days still, there are several prominent organizations, including the U.S National Academy of Medicine, which are gathering expert groups figure out what it will take to apply what we know now to DNA-based screening programs for large groups of people, perhaps even the entire U.S. population some day.

Large demonstration projects are needed to get a clearer picture of what works best. We need to determine what is the ideal age to do the screening, which set of genes to screen, what are the costs of such large programs and what are the long-term risks and benefits.

Ultimately however, there should be little doubt that preventive health care management in the decades ahead will routinely use DNA-based screening to detect otherwise invisible risks that can be addressed to improve individual and populations health.

Michael Murray, Professor of Genetics and Director for Clinical Operations in the Center for Genomic Health, Yale University

Dubai Is The World’s Top City For Visitor Spending

US Midterm Elections: The Dirty Tricks Used By Parties To Skew Results In Their Favour

US Midterm Elections: The Dirty Tricks Used By Parties To Skew Results In Their Favour