— this post authored by Katarzyna Pisanski, University of Sussex

Whether we are aware of it or not, our voices say a lot about us. Relying on only the average pitch of a person’s voice, we can instantly tell if they are a child or adult, a man or woman. This is because voice pitch is highly sexually dimorphic – it is almost twice as low in men as in women. This sex difference emerges during puberty following a surge of testosterone in males that lengthens their vocal folds, causing voice pitch to drop off sharply, and marks sexual maturation in adolescent boys.

Though lesser studied, women’s voices can also reveal clues to their fertility. Scientists have known for decades that women’s voice pitch decreases after menopause, by as much as 35 Hz (for a woman with an average voice pitch, that’s more than three semitones). Among women of reproductive age, more recent research suggests that voice pitch may also increase around ovulation each month and, what’s more, that men prefer the voices of women recorded during this fertile window.

My colleagues and I at the University of Sussex’s Voice Lab wanted to know if pregnancy can also affect a woman’s voice pitch. Our study revealed that the pitch of new mothers’ voices drops after giving birth to their first child. But these voice changes last only about a year, after which women’s voices revert to near pre-pregnancy levels.

This is the first scientific evidence that pregnancy affects women’s voices, though many women claim to have personally experienced it. The singer Adele, after giving birth to her son in 2012, reported that her voice pitch dropped dramatically. Adele says her voice is only now returning to its pre-pregnancy level.

In fact, as early as the 1970s, there have been subjective reports made by singers and voice professionals complaining of voice changes during or after pregnancy. Some laryngologists even offer clinical voice evaluations for concerned new mothers.

The lack of earlier scientific evidence was tied to a number of factors. Studying long-term changes in the voice is no easy task. So previous studies were limited by comparing the voices of different groups of women (pregnant versus non-pregnant) or measuring the voice of only one woman across trimesters.

Due to the range of individual differences in voice pitch, these study designs were not likely to capture the more nuanced fluctuations in pitch seen in a woman’s voice over time. And by focusing almost exclusively on changes during pregnancy, the studies largely ignored the possibility that voice changes might actually occur after childbirth. 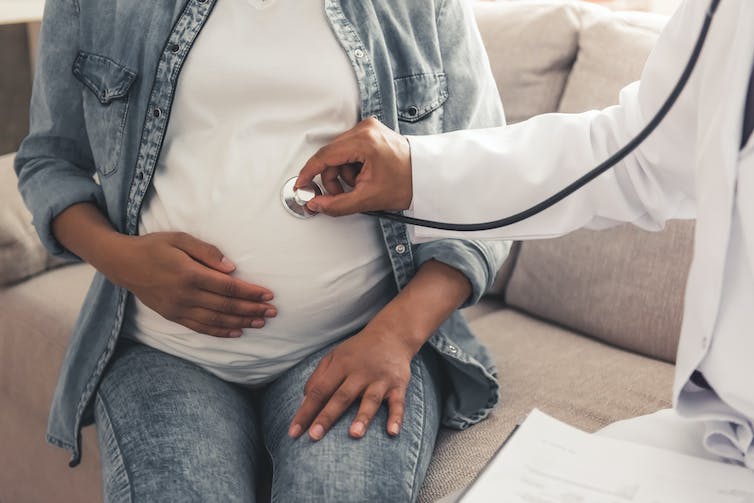 For our study published in Evolution & Human Behaviour we turned to online archives of interviews with women who were recorded before, during, and after their first pregnancy. We collected up to ten years’ worth of voice recordings from each new mother, and compared her voice pitch during pregnancy to her pitch up to five years before she conceived, and five years after giving birth.

Over 600 voice recordings were collected from 20 mothers and 20 age-matched controls (“nulliparous” women who had never given birth). Both samples included singers, actresses, journalists and reporters. These voice clips were then acoustically analysed using Praat, a popular open-source acoustic analysis program for measuring human speech.

We found that mothers’ mean and minimum pitch dropped 14 Hz on average (around 1.3 semitones) after pregnancy compared to before. The maximum voice pitch of new mothers dropped as well, by 44 Hz or 2.2 semitones on average, confirming that reaching high frequencies may be particularly challenging for some women in the year following childbirth. New mums also had more monotone voices. These vocal changes could not be attributed to ageing and were not observed in the control group.

Although our data can’t explain the mechanisms driving these postpartum voice changes, one likely culprit is changes in hormone levels, particularly of testosterone, estrogen and progesterone. Ratios in these hormone levels fluctuate throughout the menstrual cycle and have been directly linked to postmenopausal drops in voice pitch.

These same hormones rise during pregnancy and drop off sharply after childbirth (contributing to postpartum depression in some women). When it comes to voice pitch, sex hormones can have a direct effect by increasing the effective mass of the vocal folds and slowing their vibratory pattern, thereby lowering pitch. They might also have indirect effects on voice production by affecting motor and sensory processes in the brain that are involved in control of the larynx.

Of course, every new mother knows that rearing an infant can be physically and mentally exhausting, so the drop in voice pitch after childbirth could likewise be related to fatigue or motivational changes.

Another interesting possibility that is gaining popularity in voice research is that these and other dynamic voice changes (such as the rise in pitch at ovulation) may be partly attributed to behavioural voice modulation. Humans have an unprecedented capacity to alter our voice pitch at will. (Consider world record holder Tim Storms, who can lower his voice pitch to eight octaves lower than the lowest G on a piano.)

In addition to this, our voice pitch affects how others perceive us. A low-pitched voice is typically judged as dominant, competent, trustworthy and mature, whereas a relatively high-pitched voice is judged as more submissive, feminine and youthful. Taken together, all of this suggests that women might raise or lower their voice pitch depending on how they wish to be portrayed by others across social contexts, or at various life stages, such as when braving the role of a new mother. Whether this kind of voice modulation is conscious or not remains an open question.

If The Millennium Falcon Was A Car..