Jet Fuel From Sugarcane? It’s Not A Flight Of Fancy

The aviation industry produces 2 percent of global human-induced carbon dioxide emissions. This share may seem relatively small – for perspective, electricity generation and home heating account for more than 40 percent – but aviation is one of the world’s fastest-growing greenhouse gas sources. Demand for air travel is projected to double in the next 20 years.

Airlines are under pressure to reduce their carbon emissions, and are highly vulnerable to global oil price fluctuations. These challenges have spurred strong interest in biomass-derived jet fuels. Bio-jet fuel can be produced from various plant materials, including oil crops, sugar crops, starchy plants and lignocellulosic biomass, through various chemical and biological routes. However, the technologies to convert oil to jet fuel are at a more advanced stage of development and yield higher energy efficiency than other sources.

We are engineering sugarcane, the most productive plant in the world, to produce oil that can be turned into bio-jet fuel. In a recent study, we found that use of this engineered sugarcane could yield more than 2,500 liters of bio-jet fuel per acre of land. In simple terms, this means that a Boeing 747 could fly for 10 hours on bio-jet fuel produced on just 54 acres of land. Compared to two competing plant sources, soybeans and jatropha, lipidcane would produce about 15 and 13 times as much jet fuel per unit of land, respectively.

Bio-jet fuels derived from oil-rich feedstocks, such as camelina and algae, have been successfully tested in proof of concept flights. The American Society for Testing and Materials has approved a 50:50 blend of petroleum-based jet fuel and hydroprocessed renewable jet fuel for commercial and military flights.

However, even after significant research and commercialization efforts, current production volumes of bio-jet fuel are very small. Making these products on a larger scale will require further technology improvements and abundant low-cost feedstocks (crops used to make the fuel).

Sugarcane is a well-known biofuel source: Brazil has been fermenting sugarcane juice to make alcohol-based fuel for decades. Ethanol from sugarcane yields 25 percent more energy than the amount used during the production process, and reduces greenhouse gas emissions by 12 percent compared to fossil fuels. 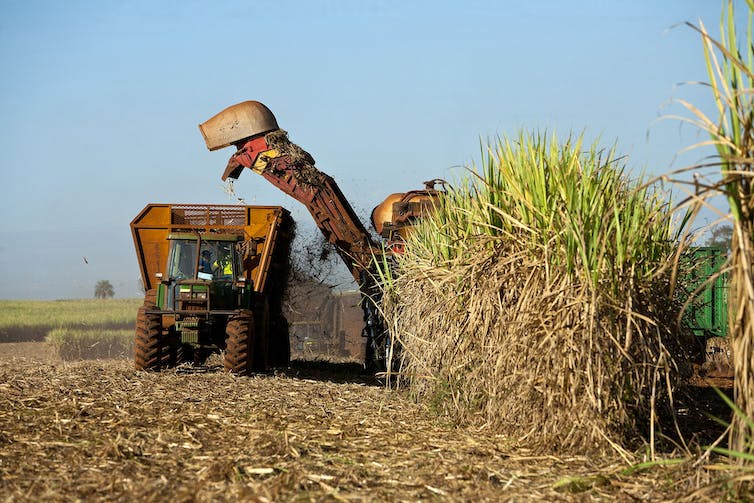 We wondered whether we could increase the plant’s natural oil production and use the oil to produce biodiesel, which provides even greater environmental benefits. Biodiesel yields 93 percent more energy than is required to make it and reduces emissions by 41 percent compared to fossil fuels. Ethanol and biodiesel can both be used in bio-jet fuel, but the technologies to convert plant-derived oil to jet fuel are at an advanced stage of development, yield high energy efficiency and are ready for large-scale deployment.

When we first proposed engineering sugarcane to produce more oil, some of our colleagues thought we were crazy. Sugarcane plants contain just 0.05 percent oil, which is far too little to convert to biodiesel. Many plant scientists theorized that increasing the amount of oil to 1 percent would be toxic to the plant, but our computer models predicted that we could increase oil production to 20 percent.

With support from the Department of Energy’s Advanced Research Projects Agency-Energy, we launched a research project called Plants Engineered to Replace Oil in Sugarcane and Sorghum, or PETROSS, in 2012. Since then, through genetic engineering we’ve increased production of oil and fatty acids to achieve 12 percent oil in the leaves of sugarcane. 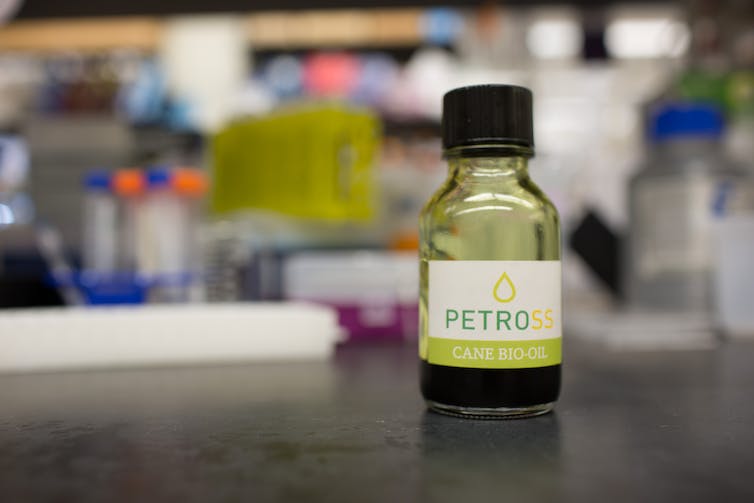 Now we are working to achieve 20 percent oil – the theoretical limit, according to our computer models – and targeting this oil accumulation to the stem of the plant, where it is more accessible than in the leaves. Our preliminary research has shown that even as the engineered plants produce more oil, they continue to produce sugar. We call these engineered plants lipidcane.

Lipidcane offers many advantages for farmers and the environment. We calculate that growing lipidcane containing 20 percent oil would be five times more profitable per acre than soybeans, the main feedstock currently used to make biodiesel in the United States, and twice as profitable per acre as corn.

To be sustainable, bio-jet fuel must also be economical to process and have high production yields that minimize use of arable land. We estimate that compared to soybeans, lipidcane containing 5 percent oil could produce four times more jet fuel per acre of land. Lipidcane with 20 percent oil could produce more than 15 times more jet fuel per acre.

And lipidcane offers other energy benefits. The plant parts left over after juice extraction, known as bagasse, can be burned to produce steam and electricity. According to our analysis, this would generate more than enough electricity to power the biorefinery, so surplus power could be sold back to the grid, displacing electricity produced from fossil fuels – a practice already used in some plants in Brazil to produce ethanol from sugarcane.

A potential US bioenergy crop

Sugarcane thrives on marginal land that is not suited to many food crops. Currently it is grown mainly in Brazil, India and China. We are also engineering lipidcane to be more cold-tolerant so that it can be raised more widely, particularly in the southeastern United States on underutilized land. 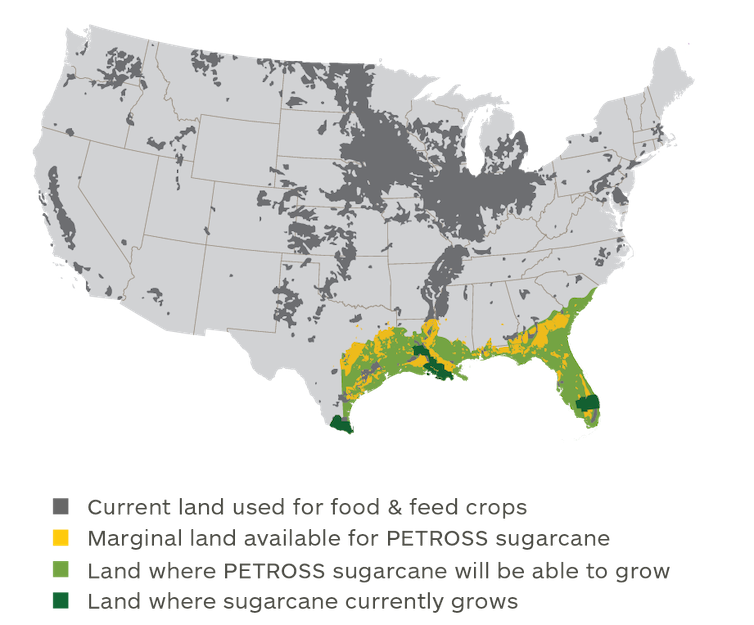 A map of the growing region of cold-tolerant lipidcane. PETROSS

If we devoted 23 million acres in the southeastern United States to lipidcane with 20 percent oil, we estimate that this crop could produce 65 percent of the U.S. jet fuel supply. Presently, in current dollars, that fuel would cost airlines US$5.31 per gallon, which is less than bio-jet fuel produced from algae or other oil crops such as soybeans, canola or palm oil.

Lipidcane could also be grown in Brazil and other tropical areas. As we recently reported in Nature Climate Change, significantly expanding sugarcane or lipidcane production in Brazil could reduce current global carbon dioxide emissions by up to 5.6 percent. This could be accomplished without impinging on areas that the Brazilian government has designated as environmentally sensitive, such as rainforest.

Our lipidcane research also includes genetically engineering the plant to make it photosynthesize more efficiently, which translates into more growth. In a 2016 article in Science, one of us (Stephen Long) and colleagues at other institutions demonstrated that improving the efficiency of photosynthesis in lipidcane increased its growth by 20 percent. Preliminary research and side-by-side field trials suggest that we have improved the photosynthetic efficiency of sugarcane by 20 percent, and by nearly 70 percent in cool conditions. 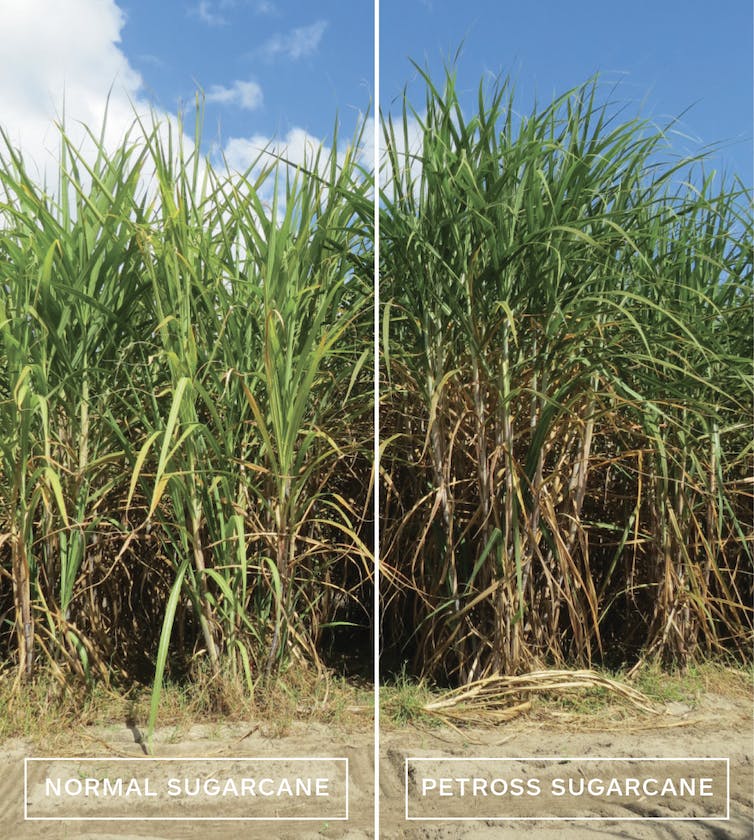 Now our team is beginning work to engineer a higher-yielding variety of sugarcane that we call “energycane” to achieve more oil production per acre. We have more ground to cover before it can be commercialized, but developing a viable plant with enough oil to economically produce biodiesel and bio-jet fuel is a major first step.