A whopping 86% of Italians, 60% of French, and nearly half of Polish have an unfavorable view of Roma (Figure 1.) Meanwhile, in their attitudes about Roma – UK, Spain, and Germany are nearly neck and neck just above 50% favorable. Why are the countries that host Roma feeling aversion to them?

Who are Roma? Until Roma arrived in the Balkans,“from northwest India 1,500 years ago,” they transited by way of Anatolia, Turkey, Greece, etc. While commonly called tsiganes or gypsies (gypsies are tsiganes living in the South of France and Spain,) the most suitable generic term is Roma as it is an internal appellation (the way this they call themselves) since 1971. The reason for that switch is because tsigane is perceived as pejorative in Eastern Europe, especially in Romania (Figure 2) where most of the Roma live (1,850,000.)

Figure 2: Blue color indicates the year Roma settled in the respective country, and the nuanced black and white colors show the Roma population/country 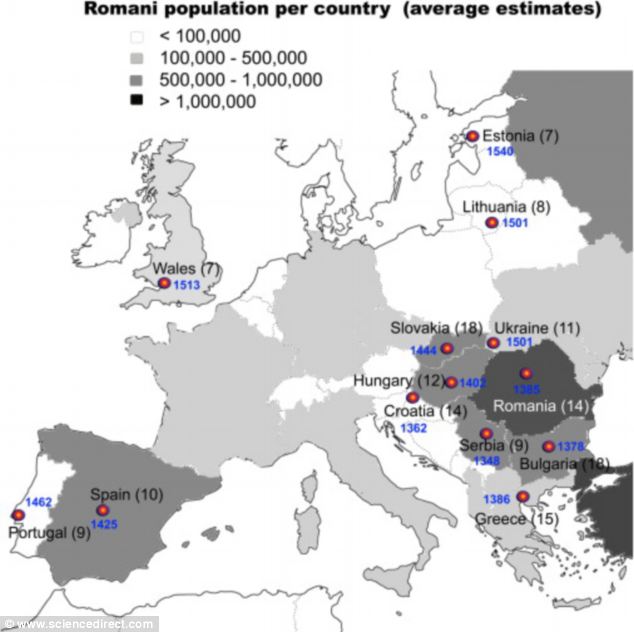 Estimated at circa 12 millions in Europe (and 1.2% of the EU population), Roma represent “Europe‘s largest ethnic minority.” A minority is, inter alia, quintessentially of a group of people eminently conscious of their identity as well as of their dissimilarity from the rest of the society that they are part of. Socially, politically, and economically dominated, Roma in provenance of the Balkans— esp. Romania and Bulgaria — are usually the ones Western European governments have in their collimator, watching them like hawks.

Regardless of attempts to expel them, the Roma number remains well-nigh stable in Western European countries. French President, Nicolas Sarkozy paid 300 euros to each Roma to go back to their country of origin. Roma accepted the money, and promptly returned in France— after basking in the grandeur of enjoying a paid vacation. The reason for such resistance is that Roma are discriminated outright everywhere in the EU—albeit discrimination is legislatively banned.

In addition to vilification in the European mainstream media, Roma, besides “living in neglected settlement […] are often evicted without adequate notice or prior consultation and without being offered any alternative accommodation—“ therefore sowing upon the land more (Roma) homeless, and vagabonds.

People that live in unhealthy areas in substandard conditions are predisposed to relatively more vagabond acts. Roma indeed are characterized as thieves. While this stereotype may be partly true, refocusing the lens not on Roma but on the vicious cycle of poverty and criminal behavior can mitigate the degree of condemnation of Roma acts.

The EU (as well as other Europeans actors) tries to “spin” that the Roma minority is important. “The EU and its Member States have a special responsibility towards the Roma,“ the Council of Europe declared before adding that:

The full integration of Roma will have important economic benefits for our societies, especially for those countries with a shrinking population which cannot afford to exclude a large part of their potential labor force.“

This is, however, one of the many papers released by the EU, while suggesting and recognizing various points, does not necessarily pragmatically helping in instilling awareness about Roma condition. Roma have endured insecurity, non-hygienic circumstances, and precocity since the 1990s, when they started to come in mass out from Romania.

Although there are innumerable circumstances that impeach Roma integration, there are programs offering social accompaniments to correct the injustices that Roma community endures. In Romania, the National Agency for the Roma (AGR) aims at improving the condition of Roma in the social—e.g. the fight against discrimination— and economic sphere—e.g. the fight against unemployment. The AGR is associated with the Council of Europe for the Roma Mediator Training Program (ROMED,) which is a program providing 1 million of euros for the training of Roma mediators (1,000). In the same vein, the University of Babes Bolyai and the Univercity of Iceland are starting a joint project: The untold story. An oral history of the Roma people in Romania. This project is totemic of the aspiration to include the Roma people within Europe by putting forward Roma values to eventually create a tangible trace; and to include that if there are some imprescriptible rights to humans the right to the preservation of one’s culture and history is one of them.

There is indeed no written Roma history because the grand total of transmissions in the Roma custom is oral. Most Roma do not study more than elementary school. The lack of long-term investments is a cultural issue that generates a lack of focus on savings for the education of children, who would be more likely integrating their society, as well as having the power to influence their own family, leading them toward an evolution of their style of life. It is not that Roma are rebellious, anti-schooling people. But if their children do not marry early, the consequences may be crushing in terms of status within the group. This can be much more burdensome to an individual than the missing of the financial aspect linked with a extended education etc. Plus, for Roma children, attending school may be relatively difficult as their energy may be sapped by their particular after-school activities that may involve babysitting, begging, or stealing credit cards. Girls who steal and who are efficient at it are– in addition and subsequently– the best potential wives because they will be the most expensive ones to purchase by the son in law’s family.

By being rejected from all parts, Roma anchored themselves to their tradition. As a minority, however, they have to deal with societies directing them to behave a certain way; hence, both their low approval by society and their refusal constitute a sanction.

Ideally, Roma may benefit in the long term from help offered, so they can advance socially to a new era in their history and discrimination against them abrogated. The good news is that may be soon for “the median over the six nations [the countries from Figure 1] has grown from 38% favorable in 2014 to 47% this year.“