Max Keiser and Michael Saylor think that Elon Musk needs to cash in some of his Tesla stock and purchase bitcoin instead.

Over the weekend, Elon Musk asked his millions of Twitter followers whether he should sell 10% of his Tesla stock. The question now came on what he should do with the money that he gets from such a sale. Bitcoin proponents like Saylor and Keiser say that there are benefits that might come for the bitcoin space if Musk decided to acquire BTC with that money.

Musk is the CEO of the biggest electric vehicle maker in the world and he took an unorthodox approach with regards to his financial future. He asked millions of his Twitter followers whether he should sell 10% of his personal Tesla shares.

While a majority of the people in the comments have already speculated on what might be the real reason behind Musk’s contemplation, he insisted that it is due to the recent debate about tax avoidance and unrealized gains. 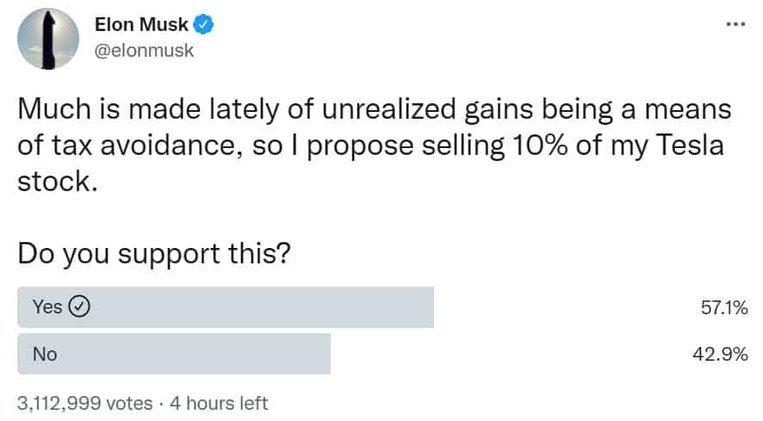 At the end of the poll, most of the participants (57%) answered in favor of Musk selling 10% of the stock, estimated to be worth about $25 billion. Musk said that he will “abide by the results of this poll, whichever way it goes.”

Irrespective of personal opinions about Elon Musk, he is currently polarizing the investment world and attracts attraction with whatever he does. Hence, a post that can decide the fate of $25 billion garnered a lot of people’s attention.

The propositions that followed the poll on what Musk should do with the funds when he decides to sell ranged wildly. One of the most popular proposition came from MicroStrategy’s CEO – Michael Saylor.

This prominent bitcoin bull, remaining true to his nature, advised Elon Musk to consider buying $25 billion in bitcoin and also change Tesla’s whole balance sheet to crypto. Saylor, whose company owns over $7 billion in bitcoin, thinks that such a move would:

“deliver diversification, inflation protection, and more upside for all investors in a tax-efficient manner.”

If the goal is diversification, an alternate strategy to consider is converting the $TSLA balance sheet to a #Bitcoin Standard and purchasing $25 billion in $BTC. That would deliver diversification, inflation protection, & more upside for all investors in a tax efficient manner.

Reporters reached out to Max Keiser, who is the host of Keiser TV and a long-term bitcoin bull. Notably, he has spoken against some of Elon Musk’s decisions in the past about bitcoin.

Keiser reiterated his thoughts that “you don’t change bitcoin, bitcoin changes you” and said that Musk has learned from his past mistakes and “given up his dalliance with shitcoins” – highlighting Musk’s smooth affair with Dogecoin.

“ready to let Satoshi do to this decrepit, decayed, corrupt financial and political system what we have been unable to do ourselves: Pull the plug.”

Although it is almost impossible that Musk might buy bitcoin with all the money he gets from the sale, Keiser believes that the billionaire may become the “new Dr. Kevorkian of finance” if he ends up doing this. Keiser noted:

“Let’s pray Elon follows up, sells his TSLA stock, moves the proceeds into bitcoin, and kicks off a global rout in these Potemkin stock and bond markets that are killing us with malfeasance, kleptocracy, and hyperinflation.”