Looks like we are going to have our 10% dip as the DOW and the SP500 closed below their respected 100 DMA’s suggesting in the strongest terms the ‘dip’ isn’t finished. And yes, when the large caps close below the 100 DMA, that is a big deal. It will be a bigger deal if this ‘correction’ goes on below 10%.

By 4 pm many investors were getting rid of their dogs and preparing for the bottom they believe is not far away. Technical’s concur with their analysis, but red flags are waving.

There is a 60% chance tomorrow’s session will be a positive one during the morning hours.

The good news is that any decline will offset a market crash happening until sometime down the road, but you can count on it happening anyway, maybe not this week.

We should not get too excited just yet as we have been here before, just not as far down the charts as before. Four times, just in 2014, the markets dipped and the BTFDers jumped in and the averages continued on their merry way. With that bit of information, may I point out that the bottom trend line (blue) is at 1960 for the SP500 and we are below that now by 15 points! Is this going to be a 10% dip where we can all make some tidy profits or as some indicators suggest this is the memo that things are going to get worse.

Daily State Of The Markets: Traders Have Seen This Movie Before

Take a look at the chart below. From a technical perspective, that trend channel is a thing of beauty, is it not? 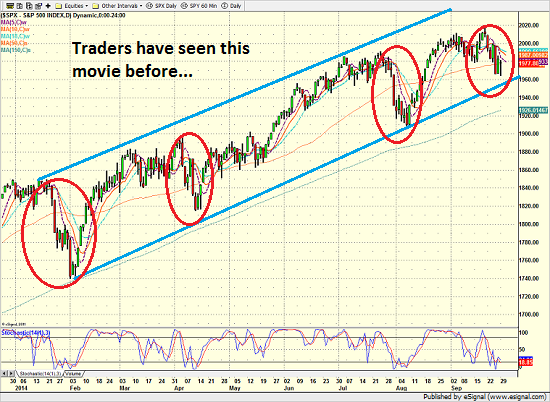 The good news is that fewer companies have issued fewer profit warnings or is this too little to late? 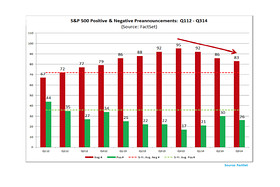 For a third straight quarter, fewer companies in the S&P 500 have issued profit warnings.

More bad news. The Russell 2000 just broke crucial primary support from the 2009 lows to become the first of the major indices to do so, but the others are not far behind.

The medium term indicators are leaning towards the hold side at the close and the short-term market direction meter is strongly bearish. We remain mostly, at best, neutral and conservatively holding. The important DMA’s, volume and a host of other studies have not turned significantly and that is not enough for me to start shorting, but now I am getting very concerned. The SP500 MACD has turned down, but remains below zero at -3.73. I would advise caution in taking any position during this uncertain period although some technical indicators have starting to turn bearish.

Investing.com members’ sentiments are 69 % Bearish and it seems to be a good sign for being bullish. The ‘Sheeples’ always seem to get it wrong.

Investors Intelligence sets the breath at 53.3 % bullish with the status at Bear Confirmed. (Chart Here )

StockChart.com NYSE Bullish Percent Index ($BPNYA) is at 55.05. (Chart Here) Below support zone and apparently going further down. Next stop was ~57 and now it is ~44, below that is where we will most likely see the markets crash.

StockChart.com Overbought / Oversold Index ($NYMO) is at -50.64. (Chart Here) But anything below -30 / -40 is a concern of going deeper. Oversold conditions on the NYSE McClellan Oscillator usually bounce back at anything over -50 and reverse after reaching +40 oversold.

Chris Ciovacco says, “As long as the consumer discretionary ETF (NYSEARCA:XLY) holds above [66.88], all things being equal, it is a good sign for stocks and the U.S. economy.” This chart clearly shows that dropping below 65.50 should be of a great concern to bullish investors.

Today it represents the lowest levels seen since the beginning of the October, 2011 rally. Eric Parnell says, ‘ If nothing else, given that relatively fewer stocks are trading above their 200-day moving average at a time when the market is just off of its all-time highs suggests that an increasingly narrowing group of stocks is driving the rally at this stage, which does not bode well for the future sustainability of the uptrend.” It also strongly suggests there has been a ‘stealth bear market’ underway in recent months.

StockChart.com NYSE % of stocks above 200 DMA Index ($NYA200R) is at 47.07 %. (Chart Here) Unless this downward trend reverses itself soon, we are going to see further downside.

The longer trend is up, the past months trend is net negative, the past 5 sessions have been negative and the current bias is negative.

Why Gold Will Rise When The Dollar Falls