We know that a recession generally lasts from six to 18 months and we know that there are various means advertised to be able to predict recessions. They come from the most trusted financial establishments to off-the-wall, complicated and unwieldy ‘theories’ based on ‘scientific’ algorithms that defy logical thinking.

But lucky for us, there is way to hopefully predict a recession and potentially have three months lookahead.

One way to foresee recessions is looking at the Business Cycle Index (BCI) and we can see that it does not indicate a recession in the near future. I agree, but the way the Worlds finances are headed, I would NOT be surprised to see the BCI turn in the next 12 months. But when it does, we may be already knee deep in financial losses for the BCI to be any good in protecting our portfolios.

How Long to the Next Recession? iM’s Weekly Update

(may have to revise)Figure 1 plots BCIp, BCI, BCIg and the S&P500 together with the thresholds (red lines) that need to be crossed to be able to call a recession. Figure 2 plots the history of BCI, BCIg, and the LOG(S&P500) since July 1967, i.e. the last 44 years which include seven recessions, each which the BCI managed to indicate timely.

Steven Hansen believes predicting recessions is straight foreward. His method is simple, direct and lacks the Keynesian hyperbola BS that is always wrong anyway. He writes, “Every day I read about some pundit tossing out opinions on the economy growing faster or collapsing or whatever. These pundits include reputable economists.” I hope I am on his list as at least ‘reputable’ as I too, have done my share of prognostication.

Steven is absolutely correct when he says, “but should you not have some analytical basis to forecast? Is pulling a forecast out of your ear really a forecast?” His conclusions are that economists have a very precise “science” that yields very inaccurate results . . . and if the economists had been correct, the real GDP would have grown by 21% since the beginning of 2007.

Hansen goes on to say:

It is very likely that our model (Econintersect Economic Index) has a 3 month recession lookahead. We use non-monetary data that has no backward revision. However, all models share the same problem – the direct causes of the recession must be similar to recessions in the past.

Three months is a lot better than a one month lookahead in my opinion. Another one of his posts:

Why Not Ignore Economic Forecasts?

So where should we look to forecast the economy? Look at the graph below, which has a good record of forecasting. 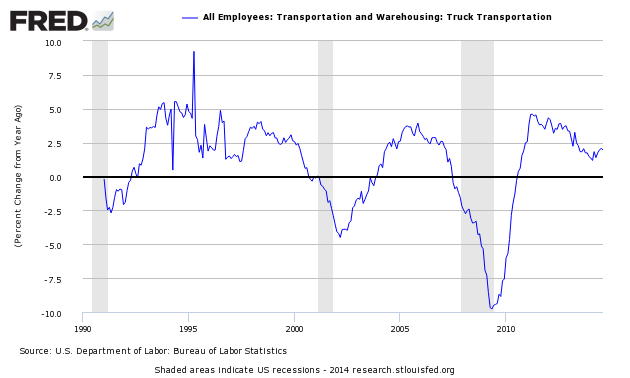 The truck transport portion of employment has provided a six month warning of impending recessions with no false warnings to date. Transport is an economic warning indicator because it moves goods well before final retail sales occur. Until people stop eating or buying goods, transport will remain one of the primary economic pulse points.

In viewing the FRED chart above, I see a similarity of pre-recession chart movement, but, if all things being equal, it appears to be a minimum of at least a year away, if not longer.

Truck tonnage is up for September, further distancing the prospect of a recession in the near future. Corrections yes, recessions, no.

What are your thoughts? I would love to hear from you.

WWRT Special Weekend About to End

WWRT Special Weekend About to End