The most talked about Stock Market ‘Issue’, disregarding Iraq, is the ultimate direction of the averages. So far the old adage about the more negative the media is, the more bullish the actual market is holding up. But many say, ‘this time is different’, but apparently not according to the new highs set by the SP500 and the DOW during the past week.

Maybe it is not a good thing to read so much because you come sometimes become confused on exactly what is really going on. My guess is the many authors do not really know more than you do and they don’t drive around in a Bentley either. After all, my job is to try and make sense of all the noise and keep up with everything from the sublime and throw out the ridiculous.

Lately there have been articles after articles pointing out the ‘topping’ signs that range from euphoria to how expensive stock prices are relative to underlying corporate profits. While they may be correct in the facts, Mr. Market may not agree with them.

Let’s start with Mr. Willams. There are Six Indicators To Confirm The Bear Market according to Owen Williams, that when they start to deteriorate, the down-side risk of U.S. equities greatly outweighs the up-side potential. These facts may be true, but will the markets actually decline?

In the article below Mr. Roberts points out “that while the current bull market trend remains in place, the recent “consolidation” failed to reduce the overbought, overly bullish, conditions in the market.”

Stocks have not “reached a permanently high plateau” nor will “this time be different.”

As with all late cycle bull markets, irrationality by investors in the financial markets is not new nor will it end any differently than it has in the past.

However, it is also important to realize that these late cycle stages of bull markets can last longer, and become even more irrational, than logic would dictate.

Understanding the bullish arguments is surely important, however, the risk to investors is not a continued rise in price, but the eventual reversion that will occur.

Unfortunately, since most individuals are only told to consider the “bull case,” they never see the “train coming.”

Everyone has a ‘secret’ set of models that will foretell the eventuality of the market direction. Even we have several proprietary bottles of tea leaves that when spread out properly, help once in a while, but a just as flawed as all the others out there. Some are indeed helpful and can point out problems and issues you may have missed that could have an impact on the stock market.

Time To Override The Trend Model?

My Trend Model is a trend-following model that uses global stock and commodity prices to forecast risk-on and risk-off conditions. Trend following models are, by their very nature, a little slow to pick up trends, but they profit from the bandwagon effect when an investment trend is persistent.

The combination of these conditions suggest that equity prices are poised to either pause or pull back in the next week or two.

In this case, the markets are overbought and at risk of a reversal – and such whipsaws are serious limitations of trend following models.

I too believe we are due for at least a 10% correction only because we have had one in ages. The sign are there with volume steadily falling off since 2009 and negative divergence pointed out in my commentary here.

Is a stock market correction overdue? 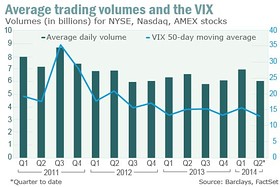 Trading volume and volatility have been dragging along at low levels as stocks reach new highs, making for a nervous complacency where a correction could blindside investors.

If your crystal ball is cloudy as mine is, good luck in catching the bottom when it comes.

The Great Correction Of 2014: Be Prepared To ‘Buy The Dip’

Buying the next dip hasn’t worked out very well this past week for some investors and could very well be the beginning of the end.

Adam Hamilton says, “Cyclical bulls start accelerating again late in their lifespans, starting around the final quarter, because sentiment once again elbows out fundamentals as stock prices’ primary driver. The longer a cyclical bull propels stocks higher, the more greedy, euphoric, and complacent investors become. This leads to fewer major sell-offs that become farther between, so the foolish perception that stock markets are riskless sets in.”

The Danger Of Buying The Next Dip

Why Cancer Won’t Be Deadly in 15 Years

Why Cancer Won’t Be Deadly in 15 Years