The World debt is larger than it has ever been at 100 trillion as reported by Bloomberg. Interest rates are climbing, World unemployment is climbing, household debt is climbing and strong growth in China and India are falling. Those are just a few of the bears salient points of why we are going to see a correction sooner rather than later.

In the US, the debt is closing in on 17 trillion that someone, like you, has to pay. The bears say it would not take much to start a serious decline and this is a time for caution.

In Michael Blair’s article, Watch For Falling Skies, he summarizes that a movement to a cash position is now an important consideration.

“The rubber will hit the road within a few years, or a few months, or a few weeks. It will just take something to trigger it. A default of a major Chinese bank; a sovereign default like Argentina; Turkey; or, Ukraine could do it. Governments and central bankers plod merrily on their way almost oblivious to the issue of debt. It must come down.

This is a time for caution. Smart money has it right. Take something off the table and let someone else be the last man standing. It is OK to believe stocks will rise forever, just as long as you don’t bet your livelihood on it. Save faith for your Church. The stock market will not care what you believe but your mortgagor will care if you can’t meet the payments”. (Read More >>)

All this week the pundits, both bull and bear, have opined their opinions of lilac arguments of continued new market highs and those of sulfur laden accounts of doom and gloom. One of the two camps is most likely incorrect, but which is it? So far, the bears appear to have the edge on talk and we can examine some of their concepts below. Remember, ‘The trend is your friend until it isn’t’.

Let’s begin with the Euro-Zone. This article paints a picture of continuing and perhaps deteriorating financial conditions in Europe th4t will affect the World economies in the future. 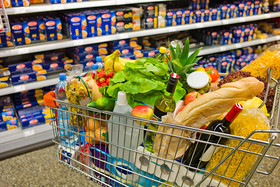 The latest data from Belgium is not exactly encouraging reading.

As the first country in the euro zone, the country on Tuesday released inflation data for May, showing growth in consumer prices plunged to the lowest in more than four years. The inflation rate ticked down to 0.36% in May, marking the weakest level since December 2009.

“If Belgium is any indication – and it normally is – then [euro-zone] inflation will notch down in May,” said Steen Jakobsen, chief investment officer at Saxo Bank, in a note. “[The] trend is clear.”

Europe is not the only geographical financial area to be concerned with as Japan is NOT improving as economists have hoped.

Japan’s April retail sales numbers are out, and the results show a drop just a little worse than economists’ already low expectations.

Overall, retail sales fell 4.4% from a year earlier, underperforming a forecast 3.3% decrease from a Reuters survey, while the large-scale retailers saw their sales retreat by 6.8% (on a same-store basis), according to the Ministry of Economy, Trade and Industry.

Then we have the tapering of QE and the resulting ‘issues’ stemming from the meddling US Fed.

Stock investors, brace yourselves for a nasty correction. 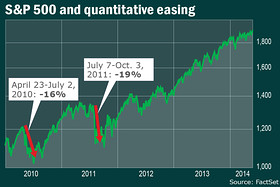 The S&P 500 could fall 15% to 20% this year as the Federal Reserve stops buying bonds, according to Peter Boockvar, chief market analyst at The Lindsey Group. Related: How to know if the stock market has reached a top

The chart above shows how the S&P 500 reacted in the periods after the Federal Reserve stopped its first two quantitative easing programs. After the Fed stopped buying bonds in March 2010, the S&P 500 dropped 16% from its highest point on April 23, 2010 to its lowest point on July 2, 2010. The second program drew to a close at the end of June 2011 and was followed by a 19% decline between July 7 and October 3 of that year.

“This market is being supported by Fed policy. When you take one of those crutches away, you are going to get a negative effect on the stock market,” Boockvar said in an interview.

Everyone wants to see the markets continue to plow ahead and make hay but at some point in every bull market the old bull has to lie down and take a nap. Is that where we are now?

Here is a review of why it may be a good idea to have a correction.

Stock Market: When Bad Is Good And Good Is Bad

But if the bull is real, and if a secular bull market truly has been created out of manipulation of the T bond market (QE’s bond buying and ZIRP’s 0% rates) then a pullback to test that zone would be normal, would it not?

It would feel bad but in reality, a successful test of the big breakout would launch the grand new bull. SPX has to drop down to test support sooner or later, doesn’t it?

Historically, accordingly to Eric Parnell, “major bull markets have almost never reached their final peak in a sideways grinding pattern. Instead, they have almost always peaked with flourish including one final crescendo toward a new all-time high before finally rolling over and succumbing to the forces of the new bear market”. (READ MORE >>)

I printed this last weekend and for those who did not have the chance to read it, I suggest you take the time to consider just what a bull and bear markets look like.

This is what the start of a bear market looks like. The S&P 500 struggled to a new high only two days ago on low volume amid an abundance of non -confirmations.

Investor sentiment is still high while the number of new daily highs is lower on each successive rally. New highs reached 536 last May, 428 in October, 362 in December and only 165 this month.

A year ago 90% of S&P 500 stocks were above their 200 day average, compared to only 72% recently. Margin debt is at record levels, both on an absolute basis and relative to GDP.

Next weekend we will explore the bulls response.

Is Europe Doing Better than the USA In Employment?