Market Commentary: Averages Gap Down On Opening, Pause and Continue Melting Down

Premarkets were down -0.05% marked by some big trades showing up as selling. The US ADP added 220K jobs in April as the US economy grew at its slowest pace (0.1%) since the 4th quarter of 2012 (1.2%). Mixed news that is creating markets swings, but not the volatility that one might expect with these swings.

The averages gaped down at the opening on moderated volume but didn’t continue falling, instead traded sideways with the DOW up 5 points and the NASDAQ down 20 points. It might be another quiet day as the DOW gained 5 more points by the 15 minute mark indicating the heavy-weights are not willing to throw in the towel just yet.

By 10 the averages had sea-sawed back and forth delighting traders nimble enough to catch the swings, but built up more concern among investors trying to decide what to do next as the averages have all turned red.

The regression trend line from April 23 is sloping down at 10 degrees in spite of main stream news claiming we have have a bunch of positive days of trading this past week. There is more and more bearish flag waving lately and in the past that have been a bullish signal, but now I am not so sure that is the case. 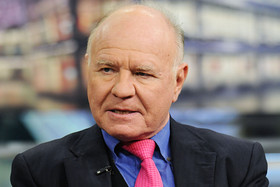 Hoping all that momentum-stock selling lately is just a blip on your radar screen? Sorry, it’s just a warmup for the bigger stockapocalypse, says renowned doomster Marc Faber.

The short term indicators are leaning towards the hold side at the opening. The all important signs of reversal, up or down, have not been observed so we are mostly, at best, neutral and conservatively holding. The important DMA’s, volume and a host of other studies have not turned, only a past 6% correction (and recovery) and that is not enough for me to start shorting. The SP500 MACD has turned flat, but remains above zero at 4.67. I would advise caution in taking any position during this volatile transition period although Barchart.com shows a 32 % sell. (Remember this has been negative for weeks.) Investing.com members’ sentiments are 76% bearish.

In looking at the 50 DMA, the current SP500 opened above that line and the small caps remain barely above the 145 DMA. I can not see, as of right now where those MA’s are rolling over to indicate any permanent bear run but the failing small caps are a real worry.

We have seen similar action at the beginning of Feb, 2014 when the SP500 went below the 100 DMA and actually touched the 145 DMA and then rebounded to set new historic highs in the beginning of this month.

Bottom line here is that I have not seen any serious bears jumping out of the woods just yet, although I am VERY concerned that ANY correction could turn nasty in a heart beat.

I still believe that Mr. Market is STILL not through playing with us and even newer historical highs are a distinct possibility beyond what we have seen, mainly because the amount of bond buying the Fed still does on a monthly basis. For those who are hell-bent bears, this article, 5 Reasons Your Simple Bear Market Plans Could Backfire, should be required reading.

The longer 6 month outlook is now 35–65 sell and will remain bearish until we can see what the effects are in the Fed’s ‘Tapering’ game plan and Russia’s annexing game playing. Again, I would also take chart and other technical indicators with a lessor degree of reliability for the time being and watch what the Janet Yellen’s Fed does over the next couple of months. The margin debt is very high and has been setting historic highs and as of Monday, 4-7-2014, it stands at $466 billion.

Several notes of negativity is that the margin debt for stock purchases is at an all time high and investors are worried about issues directly related to the Fed’s tapering. They are considering this factor along with the Argentine Peso, South African Rand and Japan. And of course, China’s defaulting businesses are dropping like flies. And now the Second Chinese Bond Company Defaults, First High Yield Bond Issuer. And now Another Chinese High Yield Bond Issuer Declares Bankruptcy.

The Best Stock Market Indicator Update says the market is tradable. The OEXA200R ended the week at 86%, down from 88% last weekend.

Is the Bull finally over? That’s what a lot of traders are beginning to ask themselves right now. Two Bull / Bear indicators that I keep an eye on are the bank index (represented by $BKX) and NYSE Margin Debt, both shown below.

My feeling is that we’re entering the final euphoria phase of the five-year stock market bull, and I’ll be watching warily for major resistance points in the coming months. One in particular will be when the Nasdaq reaches 5000, the same top as in year 2000, maybe by this June or July. I’m very surprised at how large this bubble has grown, fueled by the Fed’s single-minded determination to support Wall Street. (. . . and I agree )