Why the Price of Silver Was Up Recently

Three factors explain why the price of silver was two weeks ago – its third-biggest weekly jump of the year. 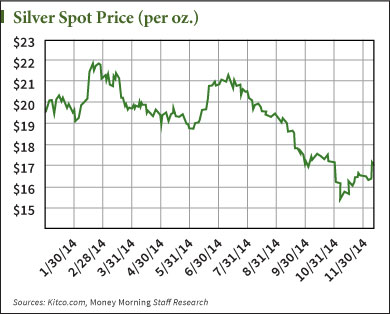 Silver hasn’t gained this much in a week since late June, when it was up a little more than 6% on the week.

This is a welcome reversal. The silver price topped out at $21.445 on July 11. And from then on, silver prices struggled.

It has since gained 11.6%, although in the most recent week it has pulled back almost 6%.  More on why it pulled back in another article to be posted in a couple of days.

Silver Price Rise Factor 1: A Surge in the Price of Gold

Silver prices often move in tandem with gold prices. When gold attracts investment interest, silver will typically also get a boost from like-minded precious metal investors. And gold has been on a tear lately.

Speculation was partly to blame when silver prices fell almost 30% from July to November.

That number grew to 51,711 contracts – 258.6 million ounces of silver – by Oct. 28. This was the highest recorded number of short contracts for silver since reporting started in 1995, according to data from the Commodity Futures Trading Commission.

But short-side speculation could only help silver so much.

European Central Bank President Mario Draghi has made it clear that he will, at some point, begin a sovereign bond-buying program to reverse this deflationary trend. Eurozone quantitative easing is not far off.

Likewise, Japan is in recession. Prime Minister Shinzo Abe has announced that the Bank of Japan is going to accelerate its already aggressive QE policy that began last year.

Forex traders now expect a devaluation of both currencies, so they’re jumping in with shorts. This selling pressure has made the dollar much more attractive.

Silver has suffered, as precious metals have trouble thriving in a strong dollar environment. Investors are much more likely to buy silver and gold when the dollar and stocks are down.

But it looks like both the euro and yen are oversold. Whether traders are looking at technicals, or whether they’re skeptical that money printing can actually spark inflation in a period of deleveraging, is yet to be seen.

Regardless, the bears are letting up, and both currencies are getting a bounce.

This has made the U.S. dollar look weaker, and as a result, precious metals reap the benefits.

This may be temporary, however. The euro and the yen have a lot of momentum on the downside, and after this quick bounce, they will continue to decline.

Bottom Line: Silver prices are up, but they are still cheap. And it’s only been a week. This rally is encouraging for silver investors, but the factors undergirding it are somewhat fragile. Gold prices could stumble again, bearish speculation could easily heat up again, and the dollar looks to only be experiencing a temporary weakness on a technical boost. While now is still a good time to buy silver, don’t be discouraged if the rally ends suddenly. Just know the long-term fundamentals are there, and keep silver as a crisis hedge.

Editor’s note: A second article by Jim Bach will be posted within a couple of days to explain why the price of silver has been so volatile with price wswings up and down and up again, 5-10% at a time.

The Chinese Dream for Higher Education and the Dilemma It Presents

Indecision for the Dollar?

Indecision for the Dollar?