Back in March I spoke about the precious metal palladium, and why this rare metal was headed higher.

Still, there’s another rare precious metal that’s set to do as well as – or better than – palladium, but that isn’t on too many investors’ radar yet.

Here’s why it should be…

A Major Shortfall Will Bolster a Run

The precious metal is platinum. It’s hard to imagine a more bullish outlook for this exclusive commodity.

Platinum and palladium are platinum group metals (PGMs), often found and mined from the same ore deposit. These two metals in particular have exceptional pollution-fighting properties. That’s why they’re used in nearly all catalytic converters, the auto part that reduces gasoline and diesel engine pollution.

Global car sales gained 4% in the first half of 2014. And they’re expected to set a new record high this year. China is the main contributor to these gains, with sales expected to be 15% higher in 2014.

Why does this matter?

According to sustainable technology products and service provider Johnson Matthey, we’ll see a shortfall of 1.22 million ounces of platinum, the largest deficit they’ve seen since they began tracking this data in 1975.

Numerous factors are contributing to this major shortfall, and they’re easy to spot.

South Africa’s responsible for producing 70% of global annual supply. With so much of this metal produced in one place, what happens there really matters.

South African platinum miners only recently ended a five-month strike, their longest ever, causing South Africa’s national economy to shrink 0.6% in Q1. According to Deutsche Bank, South African production will drop 29% this year as those mines slowly return to pre-strike output levels, and PGMs will suffer a “sustained deficit” for several years.

Russia is another major player in the platinum market, and its problems only compound the squeeze on the market.

Rick Rule, the renowned resource expert, believes Russia’s supply of PGMs is at serious risk thanks to decreasing ore grades, and its new mines could be as far off as ten years from coming online. For these reasons, Russian platinum production is likely to fall for at least a decade, with output expected to fall by 5% in 2014 alone.

On a more immediate basis, sanctions imposed on Russia may limit supply to the West, also pushing prices up. It’s a subject I broached when I discussed the bullish outlook for platinum’s cousin, palladium, in March.

Meanwhile, automobile catalyst demand is expected to rise 8.5% to 3.4 million ounces, and jewelry demand should climb by 5.3%.

What’s more, a major Russian move in this sector could well cause the next big shock to platinum prices.

State companies Rostec and Vnesheconombank are looking to invest as much as $3 billion in Zimbabwe, the world’s No. 3 platinum producer.

The money will go toward new mines, concentrators, and smelters, all the while handing Russia considerably more influence over Zimbabwean platinum output. Given that both Rostec and Vnesheconombank were affected by recent Western sanctions on some level, it’s not surprising the Russians would look to Zimbabwe to invest.

In the context of Western sanctions against Russia still heating up, that will only serve to concentrate more platinum production outside of Western control.

That’s yet another indication that platinum prices have much higher to go. And with those prices edging higher on the squeeze, we have a great chance to swoop in and profit….

Here’s What to Do

To benefit from this trend, consider the ETFS Physical Platinum Shares ETF (NYSE:PPLT). It does a good job of tracking the price of physical platinum prices, and is physically backed by allocated metal. 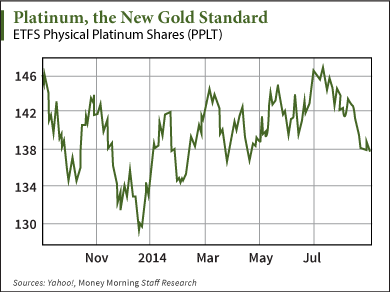 As you can see from its price chart at left, platinum is in a classic upward trend channel that’s establishing higher lows and higher highs.

For an even better pick, have a look at Platinum Group Metals Limited (USA) (NYSE:PLG). The company is currently building the WBJV Project 1 Platinum Mine in the heart of world platinum production: South Africa’s Bushveld Complex.

PLG will start producing next year, and will ramp up to 275,000 ounces/yr. from its high grade/near surface deposit. The company has a resource of 29 million equivalent ounces, and major shareholders include Blackrock, Inc. (NYSE:BLK), Liberty Mutual, and Franklin Templeton.

The bottom line is demand for platinum is heating up while overall supply is forecast to be decreasing.

The platinum market is expected to witness its largest deficit ever this year and perhaps for several years to come. All while two of the world’s largest producing nations, South Africa and Russia, are contending with serious ongoing supply challenges.

Which all adds up for platinum as an investment pick with great profit potential and the “legs” to carry it for an extended profit run.

Infographic of the Day: Environmental Impact of Running a Laptop!

Infographic of the Day: Environmental Impact of Running a Laptop!