One Match that Reliably Sparks a Rising Gold Price

Gold seems to be sparking more attention these days, as investors have seen the precious metal steadily rise from its December low of around $1,200, to a new high of $1,350 just three months later.

The media has been focusing on the conflict in Ukraine and Russia as the main driver for gold, but I think an equally important driver relates to real interest rates…

For gold, the real fuel lies in negative-to-low real rates of return. Historically, the gold price rises when the inflationary rate (CPI) is greater than the current interest rate. Similarly, when real interest rates go above the positive 2-percent mark, you can expect the gold price to drop.

Investors can watch out for two factors. See if the embers still spark for gold. Take a look at what happened over the past year with real interest rates and gold. 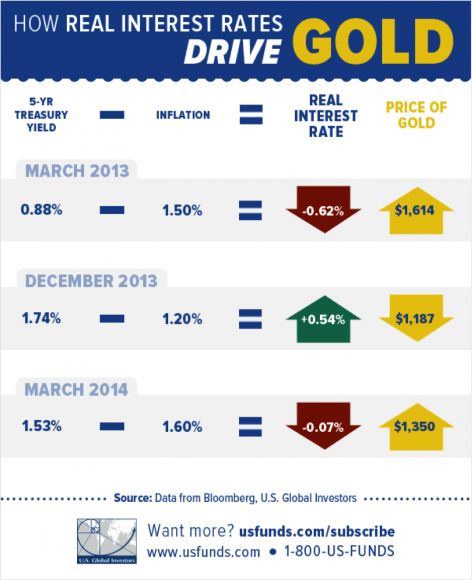 Inflation has been off the radar for most people in the U.S., but Macquarie Research made an interesting observation as wage growth experienced the largest monthly increase in more than three years. Going back more than 15 years, you can see the six-month annualized change of 3.3 percent is “the highest pace of wage growth in over five years,” says Macquarie. 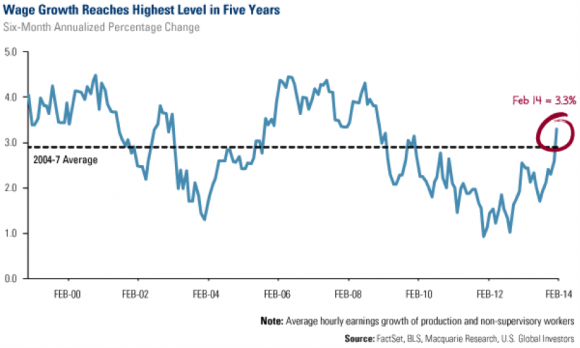 Usually, wage growth leads to an increase in the cost of goods, which translates to higher inflation.

And, with the Federal Reserve expected to keep rates low for a period of time to allow the economy to continue growing, it looks like real interest rates will remain low-to-negative, which should keep investors hot for gold.