This is an excerpt from the weekend premium update seven days ago from the The Financial Tap, which is dedicated to helping people learn to grow into successful investors by providing cycle research on multiple markets delivered twice weekly. Now offering monthly & quarterly subscriptions with 30 day refund. Promo code ZEN saves 10%.

It is not often we see gold show two consecutive shallow and time based Cycle Lows. But that’s exactly what we’re looking at here, a Cycle Low which has occurred both early in the Cycle count and with only a minimal price retracement. Within the weekend report, I outlined my preferred expectation, which was to brace for at least a mild decline back to $1,300. That expectation was based purely on prior Cycles behavior, as we know from experience they’re most likely to dictate future action.

This past weekend, I also pointed out that breaking above $1,355 at this point was always going to confirm a new Daily Cycle. The lack of a clear Cycle Low confirms that the flat 10 day period was “the decline” into a Cycle Low. Typically these types of Cycle Lows within an uptrend have bullish implications. They indicate that buyers have overwhelmed the profit taking sellers at a point where the sellers normally (DC decline) far outnumber the buyers. Generally, if it were a confirmed bull market, this development would be a signal to get heavy into long positions with the expectation of yet another stellar Daily Cycle.

My hesitation of course is that we don’t have a “confirmed bull market trend” in place, even though I called an end to the bear market 6 months ago. The worst case here should at least result in 5-8 sessions higher, especially since the dollar is ready to fall into a scheduled ICL. But remember, the past 6 (3rd Daily Cycles) have all ended as significantly Left Translated Cycles. They all topped early and fell sharply; all of them were weak almost from the start.

Gold must be in a bull market (on the cyclical Cycle time-frame) in order for this 3rd Daily Cycle to form Right Translated. As the dollar could find an ICL within 5 sessions, I urge caution here. We know 3rd Daily Cycles are often “irrational” and we just don’t have recent sustained up-trend history behind gold.

Editor’s note: The author’s caution was well taken.  Gold fell in the intervening week since this was written and closed 21 March back in the congestion area at $1,335. 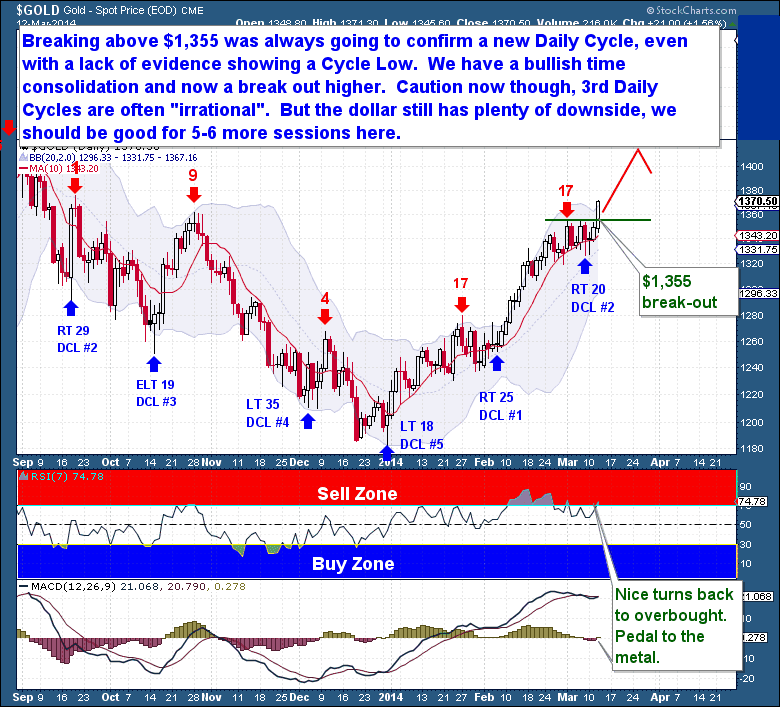