The Maginot Line For Stocks: What Is It Telling Us?

I hesitate to use the phrase “Maginot Line“. For those of you too young to remember the Maginot Line, it was the impenetrable line of defense separating Germany and France, which provided peace for France, so the French thought anyway, until Hitler’s panzer blitzkreig shattered that illusion.

So I am suggesting that an indicator I have created is a kind of Maginot Line. This seems like a backhanded compliment. If it is an illusion, then it is a lie, it does not prevent a loss by invasion. It was, however, a barrier until the war actually began. My indicator is like this also. It pictures a safe situation, until the bottom drops out. Once this line is crossed, then one knows the peace (and profit) has ended.

Let me say this about my Maginot Line, which I calls CGTS Prophecy, putting a much less negative spin on its denominator. It includes just about all of my important indicators, all spun together. I could say something about my loss of faith in fundamental indicators also — since fundamentals are not what they used to be, with NIRP, ZIRP and buybacks. But it is historically true that companies have always shaved the truth, twisted returns, hidden losses with nonrecurring costs that recur and recur. In truth, companies pay accountants millions of dollars a year to hide fundamental problems and to magnify fundamental victories. There is so much untruth in company reports, especially today, how could anyone base investment on this sea of distorted figures. For those interested in pursuing this:

The point is, companies don’t want you to know the truth, unless the truth makes them look good. And it is difficult to know what is true and what is false — they are very good liars.

As the stock markets begin to fall apart, lying companies will be exposed more and more. This is why investors need a kind of Maginot Line, something visual to help them map their way through the darkness.

Let’s look at a stock that is very well loved and also hated, Apple Computer. CGTS Prophecy (gold line) appears in the bottom pane. It looks like a basic oscillator indicator at first — but the deep red lines illustrate to two points of technical interest: the top line is a very important support line (at -7); the bottom red line is an important resistance line (at -19). Many times in the life of a price move, the price moves down to and rests on the -7 line. This is our Maginot Line. As long as -7 holds, we continue to have peace. But if this support level breaks, then a war ensues — that is a war against investors’ peace of mind. The way an investor can use this is to monitor long-term trades. Don’t sell unless the Maginot Line is breached. In the Apple example below, buy signal was given April 2013 with Apple at 56 — it is still a buy, a hold, at 115.52. The Maginot Line in still holding.

Negative 19 becomes the SHORTSELL LINE. In truth, one can also short the breach of -7. The trading system below uses -7 as the buy signal and -19 as the shortsell signal (-7 as the cover the short signal).

The indicator at the top pane is a short-term trend indicator. This is actually also important as a confirmation indicator. It matters much less if this indicator is up or down than it does what shape this indicator is making. What direction this indicator is pointing as a collective indicator (what chord it is playing). See below how Apple gave a ‘false buy’ signal in late 2012, CGTS Prophecy breaking up above -7 for a moment. But look how the T5 Simple trend reading is negative: lower lows and lower highs.

Look at today’s reading of the top pane. Clearly it is making a topping pattern. The Bear Pattern will be lower lows and lower highs. 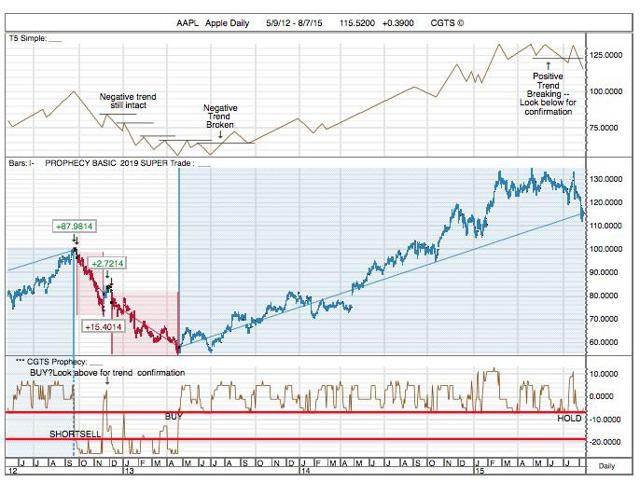 I have been engaged in a ‘debate’ with an SA reader on the investment quality of OCN, Ocwen Financial. He loves Ocwen. He seems to love OCN fundamentals. I view OCN as a false company, apparently involved in organized crime. We won’t get into that here. I don’t like OCN; he likes (maybe loves) OCN. Here is why I don’t like OCN (and have shorted OCN with put options): 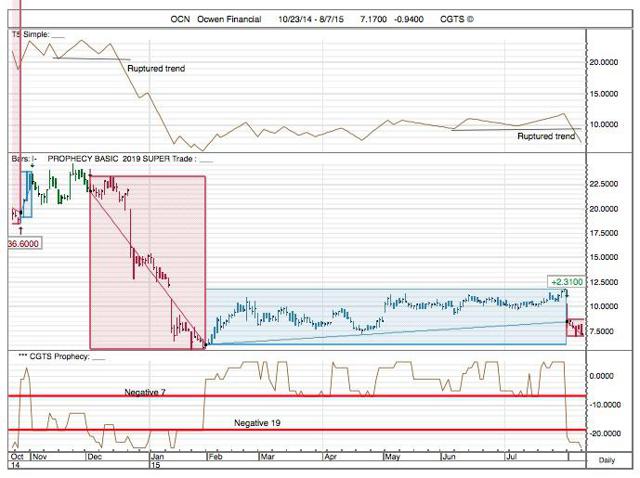 See how the Maginot Roof has caved in on OCN. I don’t care about a companies fundamentals, because bad fundamentals will almost always (eventually) show up in the stock chart. The roof will eventually cave in.

A few more interesting examples. SSEC is not officially a broken pagoda roof, although it has very clearly broken its up-trend. (I’m short China through a different vehicle, FXP Short China ETF (I’m long FXP). Here’s why (see below): 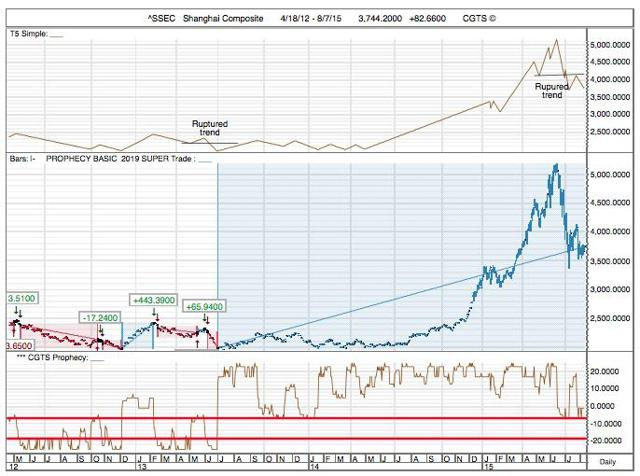 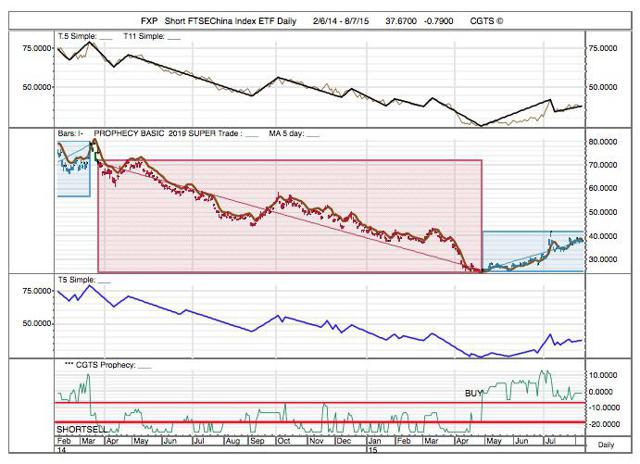 We talk about monitoring a long-term position. We are short RIG, Transocean. This week RIG had a HUGE day, up 12% on better than expected earnings. 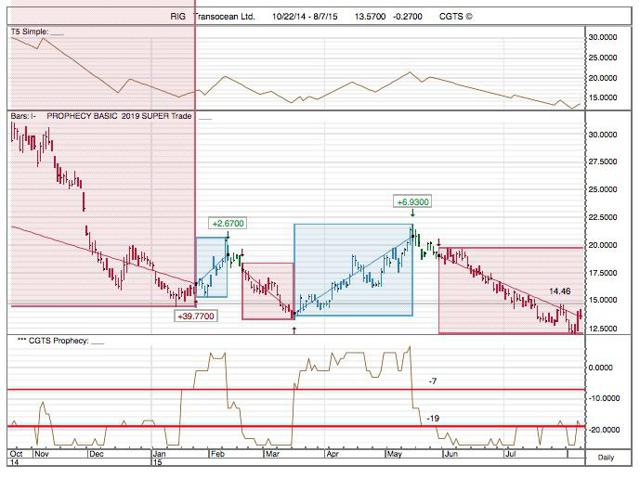 A 12% gain is substantial. What does the chart show? It shows no movement in our CGTS Prophecy indicator. This suggests this rally is NOT significant. Panic buying of dollar-cost-averagers desperate to find a bottom. Of course, RIG and all other oil-related companies are in trouble until the US Dollar cracks again. And the only reason it cracked the last few times is FED intervention against the Dollar. Today the FED is talking big about intervening FOR the US Dollar (higher rates). Rate increases will be OIL bearish, Dollar bullish. Oil probably has another couple years of lower prices.

How does the Dollar look, in terms of our Maginot Line? Never better. In fact, my chart of UUP (Dollar Bullish ETF) can’t look back far enough to find the last bearish US Dollar phase. 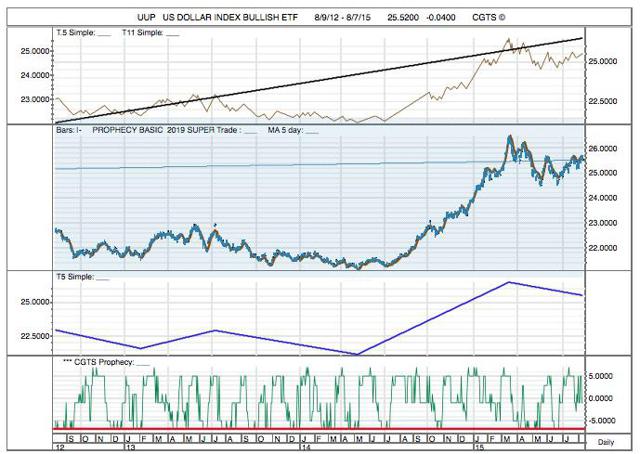 For those liking fundamental news as corroboration of technical readings, there are many news items and writers warning investors about RIG’s miracle recovery. Here is one:

So we are holding our puts on RIG which don’t expire until 2016.

One last example. Everyone wants to know how gold is doing. As a proxy for gold I like XAU, the Gold Stock Index. This chart makes explicit non-buying rallies in XAU. If CGTS Prophecy does not breach -7 on the upswing, it is a short-term rally probably not worth the investment long. 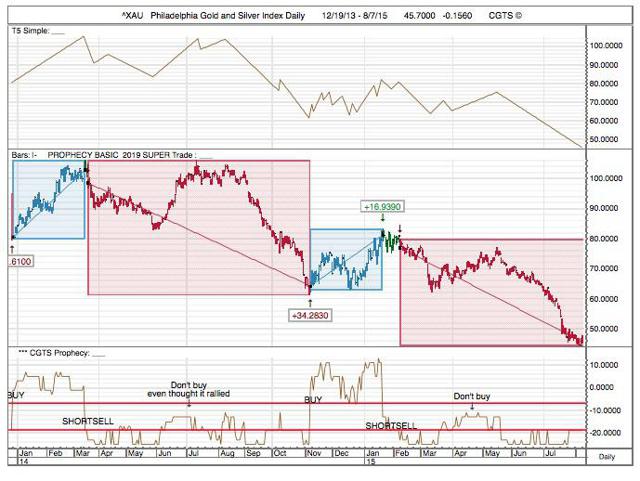 So, this is my introduction of my very own Maginot Line. I probably won’t call it that again. The Maginot Line failed historically. Of course, all stock rallies also fail eventually. So using this Maginot Line as a moniker is probably good in terms of forcing a kind of modesty on its user.

We also use our Maginot Line as a lens upon the market generally. WE keep a database of some 609 stocks (no inverse ETFS included) to get a sense of where the (NASDAQ:LONG) market is and where it might be headed. We computer how many of these 609 stocks are equal to or above negative 7 (essentially buys) versus those below -7 (essentially sells). In this database, the number of stocks above or equal to -7 Maginot Line reading is 378 Bullish, 231 Bearish.

The average of the 609 stock database is -7.42 (still bullish, but hanging by a thread above -7, the Maginot Line threshold).

We also keep a record of our of our best trading systems, which we call EMV (Ease of Movement Variable) REMAKE, which is designed to describe the ease of movement (up and/or down). This is an intermediate-term trading system. We keep a running record of the number of these 609 issues that are giving BUY signals, SHORTSELL signals, or FLAT (out of the market) signals.

This is my overriding investment theme for the next few years: LONG US DOLLAR; SHORT EMERGING NATIONS DEBT AND CURRENCIES, especially Emerging Nations with large US Dollar debt; SHORT OIL, GOLD, CANADA AND AUSTRALIA. 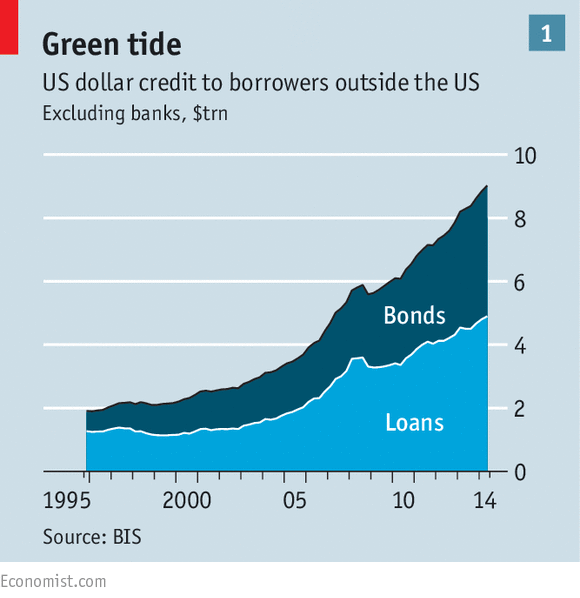 SHORT BRAZIL (the chart below shows Brazil’s principal repayment rates on US Dollar loans, suggesting why Brazil will default, and also suggesting why many emerging nations will stuggle to pay their bills or may also default).

Antarctica May Hold the Key to Regulating Mining in Space

Antarctica May Hold the Key to Regulating Mining in Space