The Oil Patch Will Rise Again

It hasn’t been easy being an energy investor over the past year, unless your portfolio is heavily weighted toward refiners and solar companies. If that’s the case, congratulations. But for those holding drillers and MLPs, patience will prove to be a virtue.

I take the long view, and today I want to put things into a bit of perspective. The long view for oil still looks pretty positive for reasons I will cover today – but the short term is likely to continue to be choppy.

The most recent analogue to today’s energy market took place between mid-2008 and early 2009. During that nine-month stretch, many quality energy stocks lost a third or even half their value, and some analysts were predicting a return to $30 oil. I saw things very differently, for much the same reasons I will discuss today.

Consider what happened with Chevron (NYSE: CVX) during the 2008 meltdown. Chevron is one of the largest oil and gas producers in the world, and is diversified both geographically and along business lines. For those reasons, it has also long been considered a blue-chip stock.

In 2008, when oil prices made a run to nearly $150/barrel (bbl), Chevron shares rose 36% between Jan. 1 and June 1. Then the bottom fell out, with oil prices hitting the $30s by December. By February 2009, Chevron’s share price was down nearly 40% from June and at its lowest point in nearly three years. The situation was even worse for pure oil producers. EOG Resources (NYSE: EOG), one of the best explorers in the business, lost more than 60% of its market cap during that slump.

I viewed the situation as unsustainable, because global oil consumption continued to grow, and there simply was not enough oil that could be produced at a cost of less than $40/bbl to satisfy that demand. So I began to shift more money into the sector in December 2008.

Then a funny thing happened. Oil prices that were in the low $30s in February 2009 reached $70/bbl by June. Oil and gas stocks then went on a bull run that lasted more than five years. From the lows in late February 2009, Chevron shares rose 115% by June 2014. EOG shares gained a whopping 325%.

Then of course the bottom fell out again, and Chevron is now down 26% since June 2014. EOG is off 30%. And although I don’t expect a quick repeat of the 2009-2014 energy bull market, I do expect oil prices – and oil companies – to recover from the current lows before too long. Why?

The Statistical Review of World Energy 2014 released recently by BP (NYSE: BP) contains a plethora of oil production and consumption statistics that support a bullish long-term view. Over the past decade, global oil production increased by 7.7 million barrels per day (bpd). U.S. production increased (as a result of the shale oil boom) by 4.4 million bpd, or 57% of the global total over the same 10-year time frame. If we look at just the past six years, U.S. production growth is equivalent to 83% of the global supply added during that time. (Countries that had declines in oil production are not shown, which is why the increases shown on the chart add up to more than the global total.) 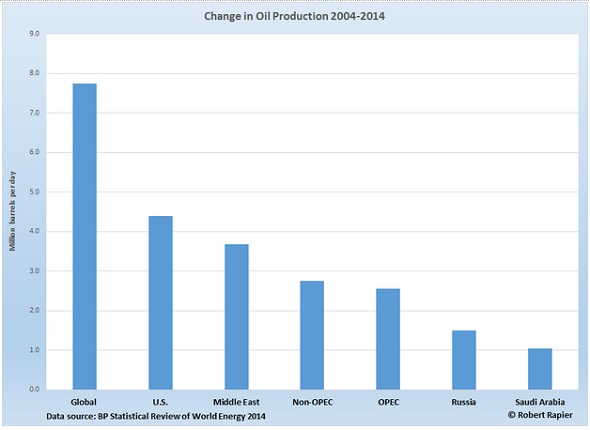 Not only did U.S. oil production grow faster than the output in Saudi Arabia and Russia, but it outpaced production growth in all of OPEC as well as the entire Middle East. Thus, the $100/bbl oil prices that we experienced in recent years could have been even worse (and still in place) without U.S. shale oil production.

Demand growth statistics provide additional support for the bullish view. While we tend to have a Western-centric view of the world – and thus may end up with the impression that oil demand is declining – the truth is quite different: 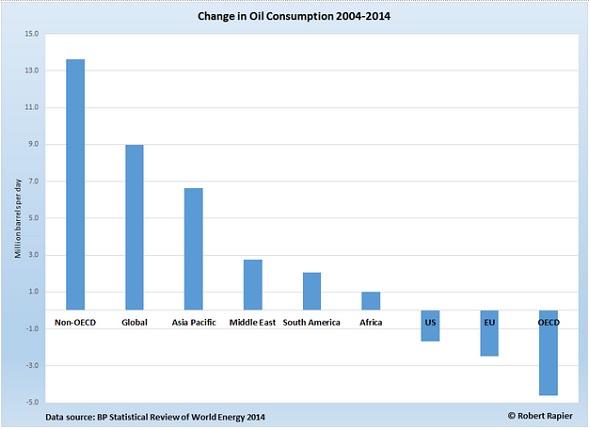 Global oil consumption increased by an average of 900,000 bpd annually over the last decade, rising in 18 of the past 20 years. Demand did decline in member countries of the Organisation for Economic Co-operation and Development (OECD) – the grouping of the world’s developed countries. But demand growth in developing countries overwhelmed the declines in the developed world. In just the past five years, demand in developing countries has increased by an average of 1.6 million bpd annually – and just recently surpassed that in the developed world.

Also note that there was hardly any negative impact on demand in developing countries even with oil prices at $100/bbl. There was a very slight dip in non-OECD demand in 2009, but by 2010 demand growth was back on the same decade-long trajectory that continues today: 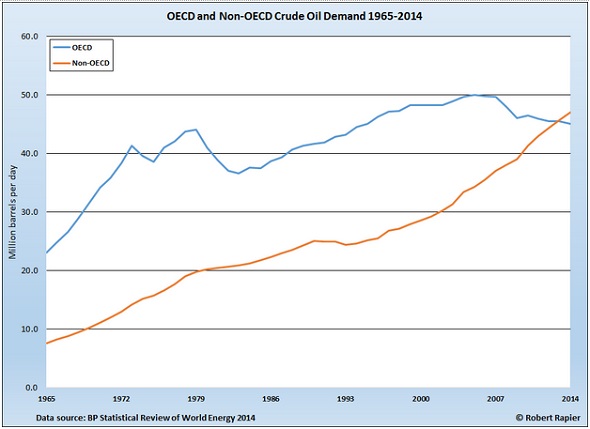 What is driving consumption in developing countries is a very large number of people using just a little bit more oil than they did before. High oil prices will do little to dissuade them from buying a little bit more when it can make such a big impact on their lives, especially when incomes are rising.

In the West, we have much higher per capita consumption and a lot less income growth. We depend on oil to make our lives easier, but we also have a lot of non-essential consumption that can be reduced as the price rises. Thus, developed countries saw a demand response as oil prices rose to $100/bbl, but developing countries did not.

Here is the point I want to drive home to long-term investors: There is still no viable long-term alternative to oil – and there wouldn’t be one even if crude appreciated to $150/bbl. Electric cars will continue to make small inroads, and yes, we would likely see more demand declines in the West if oil prices rose to that level. Biofuels have displaced some oil demand over the past decade, but it’s a contribution that is unlikely to be repeated over the next 10 years.

What is likely to be repeated over the next decade is the growth in the global demand for oil. The International Energy Agency recently forecast that global demand will increase by 1.4 million barrels per day this year, and a further 1.2 million bpd in 2016. The bulk of that demand growth is expected to come from developing countries in Asia.

It won’t take long for the world to absorb Iran’s exports and the current glut of stored crude. Where, then, will the rest of the oil come from? U.S. shale oil production is going to stall out with prices below $60/bbl. And the rest of the world is not adding oil supply fast enough to keep up with likely demand growth. That is a recipe for higher prices, which will ultimately lead to a rebound of the U.S. shale oil and gas industry.

How long will it take for oil prices to recover back above $60/bbl? It could take a year. Again, this is why we take the long view. The fundamentals favor a recovery of oil prices. As I said earlier in the year, $40/bbl oil is not sustainable. Neither is $50/bbl oil. The world is going to need higher prices if supplies are to keep pace. We do find ourselves in a glut at the moment, but these low prices will cure that over time.

So what’s an investor to do? A long-term investor should probably be shifting money into the sector. This is the time to do it. I would not wait until prices have rebounded back to $60/bbl. You may have to wait a year or two to see prices recover. But they will recover.

For shorter-term investors, the picture isn’t as simple. Will oil prices be higher or lower in six months? Right now it’s very hard to say. The bearish news of Iran’s exports will hang over the market for a while. High crude oil inventories need to start coming down. Barring any Black Swans, there isn’t a lot likely to drive oil prices higher for at least several months. Short-term investors will likely find more opportunity in the refiners we have recommended over the past year with great results, as they still have some room to run.