In last week’s issue, I discussed renewable power trends from the recently released BP (NYSE: BP) Statistical Review of World Energy 2015 and the Renewables 2015 Global Status Report (GSR). This week I want focus on renewable fuels, finishing with a discussion of a new master limited partnership (MLP) involved in ethanol logistics. In order to get a full appreciation for the risks inherent in this sector, let’s start with the history of biofuels in the US.

U.S. government efforts to create a domestic biofuel industry began in earnest in 1978, when the United States Environmental Protection Agency (EPA) issued a gasohol waiver that set the maximum legal limit of ethanol in motor gasoline at 10% denatured anhydrous ethanol. This provided a tax advantage for ethanol, but it wasn’t sufficient economic incentive to stimulate rapid growth of the industry. That changed 27 years later when the Energy Policy Act of 2005 created a Renewable Fuel Standard (RFS) requiring 7.5 billion gallons of renewable fuel – primarily corn ethanol – to be blended into the fuel supply by 2012.

The act created mandates requiring increasing volumes of biofuel be blended into the U.S. fuel supply, and biofuel production quickly outstripped the mandates. The 2007 Energy Independence and Security Act (EISA) increased and accelerated the schedule for the mandates. The result was explosive industry growth, particularly in the U.S. corn ethanol industry, from 2005 until 2011, when some of the tax credits were allowed to expire. 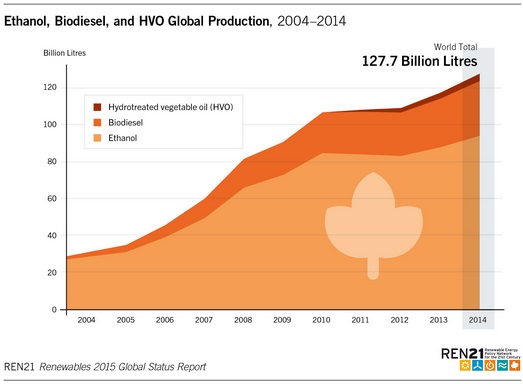 While the U.S. had the largest share of the global growth in biofuel production over the past decade, Brazil, Germany, France, China, and Canada were among the other countries to increase their biofuel production during that time.

In the U.S., the mandated biofuels fell into multiple categories. First generation biofuels, such as corn ethanol, received the bulk of the initially mandated volumes, but so-called cellulosic biofuel volumes were expected to overtake corn ethanol volumes over time.

To track compliance and enforce the mandates, a renewable identification number – or RIN, system was implemented. Each qualifying volume of biofuel (e.g., 1 gallon of corn ethanol, or its energy equivalent) is tracked by a unique 38-digit serial number as it passes through the supply chain. Ultimately, “obligated parties” – which means those who introduce fuel into the US fuel supply – are required to submit their quota of RINs to the EPA to demonstrate compliance. The primary obligated parties in the U.S. are refiners like Valero (NYSE: VLO) and Tesoro (NYSE: TSO).

Compliance can be accomplished by purchasing the fuel with the associated RIN, or simply purchasing the RINs from biofuel producers. This means that there is a value for RINs that has the effect of offsetting some of the cost of producing the biofuel. This value differs depending on the category of biofuel (advanced biofuel RINs are worth more than corn ethanol RINs) and the mandated level of that fuel. If less fuel is being produced than the mandated level, it drives up the price of the RIN and in theory increases the incentive to produce the fuel (which is the intent of the system).

For example, in 2013 corn ethanol RINs traded for about $0.75 per RIN, which equates to $0.75 per gallon. That means an obligated party could either purchase a gallon of ethanol for ~$2.50 (the average 2013 price) and receive the RIN (thus reducing their effective purchase price given the compliance requirement), or they could simply purchase the RIN.

Pressure to repeal or scale back the RFS has been growing in recent years. The U.S. has now reached the point where meeting the nationwide renewable fuels mandate would require blending more biofuel into gasoline than the 10% waiver limit set by the EPA in 1978. This limit is sometimes referred to as the “blend wall.” As a result, ethanol supporters lobbied the EPA to raise the limit to 15% (E15), which it ultimately did for most cars. But many car manufacturers have refused to warranty ethanol at greater than 10% volume, and as a result E15 hasn’t received much market acceptance.

Thus, refiners have argued that they are being asked to do the impossible: Comply with mandates that are above and beyond the blend wall. The EPA recognized this issue, and has proposed lowering the RFS for this year and next year by a combined 9 billion gallons below the levels set by Congress.

Ethanol supporters across the Midwest were not pleased, and have turned out in force to lobby against the reduction. The refiners aren’t pleased because they wanted a larger reduction, or the complete abolition of the RFS.

This government mandated system distorts the market value of biofuels, and is just one reason why investing in the sector is challenging. Not only are biofuels subject to the typical volatility in the energy sector, but they are also exposed to commodity food prices like corn and soybeans. Add a system of government mandates that could be repealed or rolled back at any time, and you have a sector with a lot of wildcards that could spell the difference between success and failure.

As a result, I seldom recommend biofuel companies to investors. There are simply too many factors beyond an investor’s control. In this week’s MLP Investing Insider, I wrote about the first MLP that is based on transporting and storing ethanol. Last week Green Plains Partners (NASDAQ: GPP) went public as a master limited partnership formed by Green Plains (NASDAQ: GPRE) – the nation’s fourth largest ethanol producer – to provide ethanol and fuel storage, terminal and transportation services for the 1.2 billion gallons of ethanol per year marketed and distributed by its parent.

Compounding the aforementioned risks of volatility tied to fuel prices, grain prices and government policy, this first-of-a-kind MLP is also running an additional risk of an adverse tax ruling by the Internal Revenue Service (IRS). As GPP noted in its prospectus,

“We have not requested a ruling from the Internal Revenue Service, or IRS, with respect to our treatment as a partnership for U.S. federal income tax purposes. The IRS may adopt positions that differ from the conclusions of our counsel expressed in this prospectus or from the positions we take, and the IRS’s positions may ultimately be sustained.”

Of particular note, the prospectus states:

“If the Internal Revenue Service were to contest the U.S. federal income tax positions we take, it may adversely impact the market for our common units, and the costs of any such contest would reduce distributable cash flow to our unitholders.”

Thus, my advice on this newest biofuel-related MLP is the same as my advice on at least 90% of biofuel companies, and that is to tread very cautiously here. There are risks that are different from those of typical midstream oil and gas MLPs. Given the challenges faced by the biofuel industry, this one warrants a wait-and-see approach. However, should it succeed I would expect other ethanol producers to follow suit by launching similar partnerships.