It may seem counterintuitive, but six of the world’s biggest oil and gas producers claim they want a price on carbon … and they want it now.

Should such a policy be implemented, it would dramatically reshape the global energy industry, while creating new opportunities for investors in the green energy space.

A carbon price is essentially a tax on emissions, so it would raise the cost of doing business for producers and, therefore, lead to higher prices for oil and other energy commodities.

Consequently, this news has sent shockwaves throughout the global energy establishment, even creating a schism with U.S. oil majors, such as Exxon Mobil and Chevron, whose executives and shareholders alike view such initiatives with deep skepticism.

Indeed, when the subject of renewable energy came up at a recent Exxon shareholder meeting, CEO Rex Tillerson quipped,

“We choose not to lose money on purpose.”

So how to explain the sudden change of heart by oil companies from across the pond?

A recent report by The Christian Science Monitor, comically entitled, “Dear UN, Put a price on carbon. Yours truly, Big Oil,” said the oil majors are mainly seeking predictability and uniformity of policies.

“If the entire world agrees on a unified price of carbon, it means BP, Shell and others will have to spend less time and money navigating a web of divergent policies across the globe”

Robert Rapier, lead analyst for our sister publication, The Energy Strategist, concurs with this reasoning.

Further, he says that even if a global carbon regime does drive oil prices higher, the industry doesn’t expect a big drop in consumption, since the commodity really doesn’t have any competitors, even when it’s priced at $100 per barrel.

“I would agree in principle that it should erode their margins, but demand for oil has been pretty impervious to oil prices over the past decade. If we were talking about coal-where there is strong competition from natural gas, nuclear power, and renewables-I would agree that it would erode margins. But we are talking about crude oil where there really are no competitors.”

Of course, a global price on carbon has been viewed as the Holy Grail by the renewables industry, and even some in the utilities industry, since it would make various renewable technologies more competitive.

Meanwhile, it would also make natural gas much more attractive, and some believe that’s Big Oil’s real aim, as companies shift production toward the cleaner-burning fuel with the hope of stealing market share from coal producers.

Both Shell and Total already produce more gas than oil, and Shell is pursuing a $70 billion acquisition of BG, which is primarily a gas producer.

Beyond that, with momentum toward the adoption of various green mandates accelerating, industry players hope to secure a seat at the policymaking table. After all, big oil might as well do what it can to influence policy outcomes in its favor-or at least those that bring the least pain.

Reminiscences of a Utility Operator

These moves remind me of my time in the utility industry. Back then, cap-and-trade was all the rage, as the Lieberman-Warner bill was being drafted and debated.

In anticipation of its passage as well as the possible implementation of similar regulations at the state level, utilities had already initiated dialogues with regulators to develop more uniform emission standards.

As a strategy executive for Dominion at the time, I worked with others on developing proprietary green energy business initiatives that would have been quite lucrative had a global price of carbon been set.

And I am quite sure that that these plans could be rolled out if a global carbon price became reality, though unfortunately I can’t talk about them due to confidentiality agreements.

But I can say that the greenest utilities would be extraordinary beneficiaries of a global carbon price.

In past columns, I’ve shared analysis that I conducted at my strategic consultancy as to which utilities would be the winners or losers in the event of a carbon regime. In this column, I share which technologies would be favored.

When asked to analyze energy technologies and develop strategies to deal with various carbon emissions regimes that have been proposed, I’ve always found that the increased adoption of nuclear, natural gas and electric cars had the best chance of contributing substantively to reducing emissions in the short term. And as a result, they have the best opportunity for greater adoption under a carbon price.

Solar and wind technologies obviously have their place-and I do believe their adoption will continue to grow. But the world simply can’t scale these technologies fast enough to meet some of the proposals for emissions reduction.

That’s why a carbon price, while ostensibly favoring these technologies, wouldn’t necessarily give them an immediate boost.

Although nuclear power should be favored under a carbon regime, it’s unclear just how many nuclear power plants would be built given the high cost of development, as well as entrenched NIMBY (not in my backyard) sentiment following the Fukushima Daiichi disaster.

As far as fuels go, natural gas would be the clear winner in a world of higher carbon prices, not just because it burns more cleanly than coal, but also because supply is plentiful and prices are cheap thanks to the U.S. shale revolution.

In my own analysis, I’ve found that electric cars are the most immediate and substantive way of reducing carbon emissions. If electric vehicles were deployed on a mass scale, it could almost halve CO2 emissions in most regions, depending on the local resource mix.

The Future Is Now: The Commercialization of Electric Car 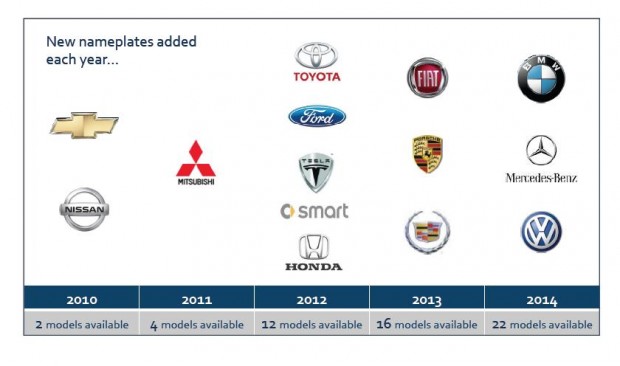 The reason electric vehicles trump most other technologies is that their widespread adoption would completely shift pollution from hundreds of millions of small sources to a few thousand central power plants.

For years, I’ve waxed rhapsodic on the prospects for electric cars. The opportunity to take a slice out of the hundreds of billions spent on foreign oil would be transformational.

In fact, the industry is already positioning itself to take advantage of what it sees as its “biggest opportunity.”

Last June, the Edison Electric Institute (EEI), which represents investor-owned utilities, published a white paper that calls for utilities to electrify their fleets and work to support the electrification of the transportation sector.

EEI argues that electric cars could be a new source of earnings growth, while improving operational efficiencies.

In sum, a global carbon price would be a boon to renewable technologies. But in many respects, Big Oil’s latest move is a response to a revolution that has already begun.