Shining a Light on the Solar Enablers

A great deal has already been written about Elon Musk’s recent announcement that Tesla Motors (NASDAQ: TSLA) has developed the Powerwall home battery, a rechargeable lithium-ion battery for homes, businesses, and utilities.

Reactions have been decidedly mixed, from the euphoric – The Tesla Battery Heralds the Beginning of the End for Fossil Fuels – to the very pessimistic – Why Tesla’s Powerwall Is Just Another Toy For Rich Green People. Without going into detail, let me just say that while it may make economic sense in specific situations, presently most homeowners aren’t going to find this new system a compelling economic proposition.

That may of course change over the next few years. While wind and solar power have experienced rapid growth in recent years, they will always suffer from the problem of intermittency. Since these technologies can’t supply firm power (power that is available on demand) they must be backed up by power sources that can provide electricity exactly when it is needed. The picture could change dramatically if cost-effective energy storage solutions were developed.

On many occasions I have referred to the development of cost-effective storage as the most important problem in the energy business. An efficient way to store solar energy for use when the sun isn’t shining would be a game-changer. Tesla’s new system is a step in that direction, but as can been seen at the bottom left of the following graphic, batteries can store energy at only a tiny fraction of the energy density of most of our energy options: 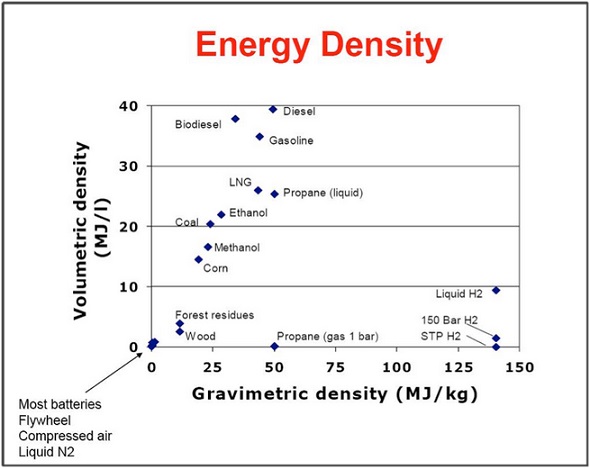 It’s too early to tell whether batteries will win the race for affordable energy storage. But it looks like a good bet that, in any case, wind and solar power will continue to grow at a rapid pace. Many companies in this space will see growth rates well above the market averages.

The glamorous stocks in the solar space have long been those of the solar panel producers and solar project developers. Companies like First Solar (NASDAQ: FSLR), SunPower (NASDAQ: SPWR) and SolarCity (NASDAQ: SCTY) – another company affiliated with Elon Musk – are names familiar to any investor who follows the renewable energy space.

But this new announcement by Tesla directs attention toward solar-enabling technologies like batteries. Other battery makers like Highpower International (NASDAQ: HPJ) are likely to garner more attention from investors as Tesla pushes ahead in this space.

However, there is at least one other largely overlooked but critically important solar-power enabler. Most solar power is produced from solar photovoltaic (PV) cells. Certain materials, such as various types of silicon or cadmium telluride, are capable of producing electricity when struck by solar radiation. Solar PV cells are produced using materials that are susceptible to this photoelectric effect.

But the electricity that is produced is low voltage direct current (DC). An inverter is used to convert the DC output into alternating current (AC), which is the standard used in most households. Thus the inverter has been referred to as the “brain” of a solar PV system.

IHS recently released a list of the top solar PV inverter suppliers for 2014. The global PV inverter market was valued at $6.6 billion in 2014. IHS listed the top five global suppliers as: 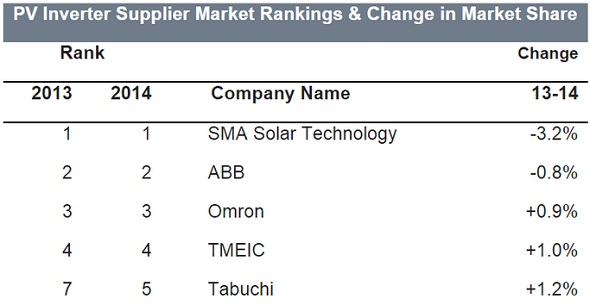 SMA Solar Technology is a German holding company, but it has lost market share in the inverter market for five straight years. ABB (NYSE: ABB) is a much larger Swiss-based company, and inverters are only a very small fraction of its overall business. Omron, TMEIC and Tabuchi are all based in Japan and, unlike SMA and ABB – both of which lost market share in 2014 – each of these Japanese companies gained market share last year.

The only U.S.-based inverter makers in the top 10 globally are Advanced Energy Industries (NASDAQ: AEIS) and Enphase Energy (NASDAQ: ENPH). In the past 12 months AEIS shares are up 45%, while ENPH shares have risen 28%. However, the share prices for both companies have been extremely volatile. SMA, in contrast, has seen its share price decline 52% in the past 12 months.

Because the inverter space is rapidly changing, it should be considered by only the most aggressive of investors. Those with a moderate risk tolerance who want exposure to the solar space would be safer with a project developer, PV panel producer or one of the newly formed solar yield companies. Conservative investors should probably steer away from this space completely, as even the more conservative offerings have substantial downside risk.

Documentary of the Week: $9 Billion Witness Who Exposed How JP Morgan Chase Helped Wreck the Economy