Bracing for the Super Taper Tantrum

The first so-called taper tantrum occurred in mid-2013, when the Fed announced it was considering how to wind down its extraordinary stimulus. That mere chatter prompted a moderate correction among dividend stocks, including utilities. Over the course of seven weeks, the Dow Jones Utilities Average fell 13.4%.

More recently, the Fed began discussing the timing of its first rate hike since the Great Recession, with June tipped as the possible liftoff. That caused yet another selloff in the utilities sector. The Dow Jones Utilities Average dropped as much as 13.1% in the nearly six weeks that followed its all-time high in late January.

Given the recent disappointing U.S. economic data, as well as the specter of deflation that’s clearly haunting many of the Fed’s central bank peers, we believe that the eventual rate-hike cycle will be necessarily gradual. In other words, it will still be quite some time before Treasury rates rise to a level that’s competitive with dividend stocks.

And contrary to the conventional wisdom, utilities are still capable of outperforming the broad market during a rate-hike cycle. Of course, the key is to reinvest your dividends.

That’s the rational take. But that doesn’t mean the market’s capacity for drama won’t hit utilities hard once again when the Fed finally starts to raise rates.

For investors with a long-term perspective, we believe such market overreactions create buying opportunities, since they offer a chance to lock in higher yields at more reasonable prices.

But not just any utility will do. Although regulated utilities aren’t going anywhere no matter what the market does, it’s still important to be highly selective, especially if the IMF’s prediction of a Super Taper Tantrum turns out to be right.

We analyzed the performance of utilities stocks during the three distinct taper tantrums that have occurred over the past two years, and have identified those utilities that best held their value during those volatile periods.

Perhaps not surprisingly, we saw some of the same names come up repeatedly.

Utilities on the Rise Post-Tantrum 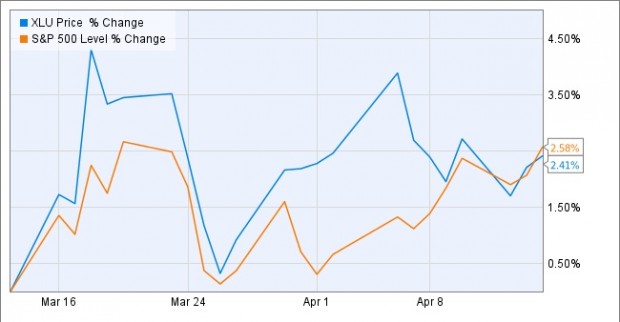 During that volatile summer, NextEra continued to add value. Meanwhile, DTE lost less than the Dow Jones Industrial Average, but lagged the S&P 500. And CMS and NRG outperformed both indexes, losing between 1% and 3% versus declines of 3% and 4% for the S&P and Dow, respectively.

At the time, we observed that NextEra is benefiting from shrewd decisions in how it plays the energy game in renewables. It also enjoys excellent growth dynamics in its service territory, which has made the firm the envy of the utilities industry.

For NRG, which is the largest independent power producer in the U.S., it’s the company’s future growth prospects that are driving the stock’s performance. NRG is considered a revolutionary energy company that may yet one day redefine the industry with its investments in new technologies such as rooftop solar and electric vehicles.

Finally, Michigan-based DTE and CMS have been riding high on the resurgence of the automobile industry.

Now fast forward to October 2014, when another market selloff followed the conclusion of the Fed’s third round of stimulus. Just shy of formal correction territory, the Core Holdings in Utility Forecaster’s Growth Portfolio did a remarkable job of holding their value. 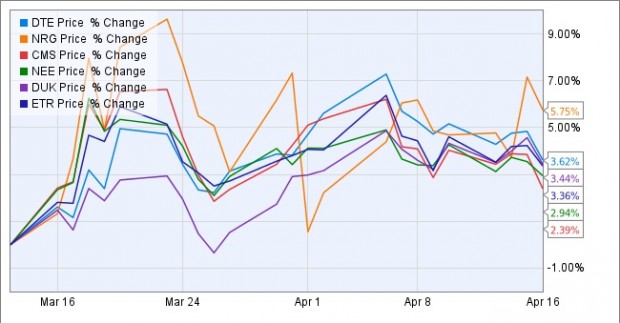 In fact, our Core Holdings not only preserved wealth, they delivered growth, outpacing all of the broad indexes. Our average Core Holding outperformed the S&P by nearly 8 percentage points, while one-third of the stocks in this sub-group bested the index by double digits.

Utilities went on to generate a stunning 33.1% total return for full-year 2014, beating all other sectors in the S&P 500, while more than doubling the broad market’s return.

Then in late January, the Fed said the first rate increase could happen as soon as this summer, and the market went berserk for the third time.

Of the two groups of utilities that best held their value in the last two tantrums, NextEra once again lost the least, followed by CMS and NRG.

And NRG, DTE and Duke had the biggest one-month jump in share prices once the latest overreaction subsided.

While no one can say for sure how well these stocks will hold up if a Super Taper Tantrum occurs, the market clearly favored them over their peers during past periods of volatility. And that augurs well for their future performance in a similar or worse situation.