Everyone this week focused on the slight production declines that this was a sign to go long oil, but what seemed to go under the radar was another build in both Cushing and the Gulf Coast storage hubs.

Analysts have pointed out the increased demand for products, and this makes sense given lower prices, but the numbers are inflated because much of the demand is artificial by turning the oil into gasoline and distillates and just storing the products in another form of storage. It isn’t as if demand is so robust that we are lower in product inventories versus this time last year, in fact it is just the opposite.

The only reason total inventories didn’t have another 10 million build this past week was because imports were down 1.12 million barrels per day versus this same period last year. This would add an additional 7.9 million barrels to last week’s 1.3 million barrels build bringing the total to 9.2 million barrels. So the market got a respite this past week, but with OPEC and Saudi Production at record levels as witnessed by the latest readings, traders may not be able to rely on lower import numbers as the norm going forward into the summer driving season.

Moreover, despite lower import numbers and the refinery capacity utilization rate above 92% and a slight drop in US Production both Cushing and the Gulf Coast storage hubs both added oil to storage facilities. I am not sure we are out of the storage capacity constraints problem quite just yet! The Midwest corridor which fuels the Gulf Coast Refinery trade for exporting refined products to other countries is still building in storage despite the robust 92% utilization rate. We would expect oil drawdowns in this region given a 92% refinery run rate, so something to pay attention to going forward.

The “Fundamentals” Don’t Matter in an ‘Electronic Market Place’

Of course none of this matters in the financial markets because anybody that participates regularly in financial markets understands that powerful players who have the ability to move markets will do whatever they want whenever they want until reality forces them to do otherwise, i.e., the fundamentals are so contrary to their market making movements that stronger forces take the other side or they finally throw in the towel and close their substantial positions. 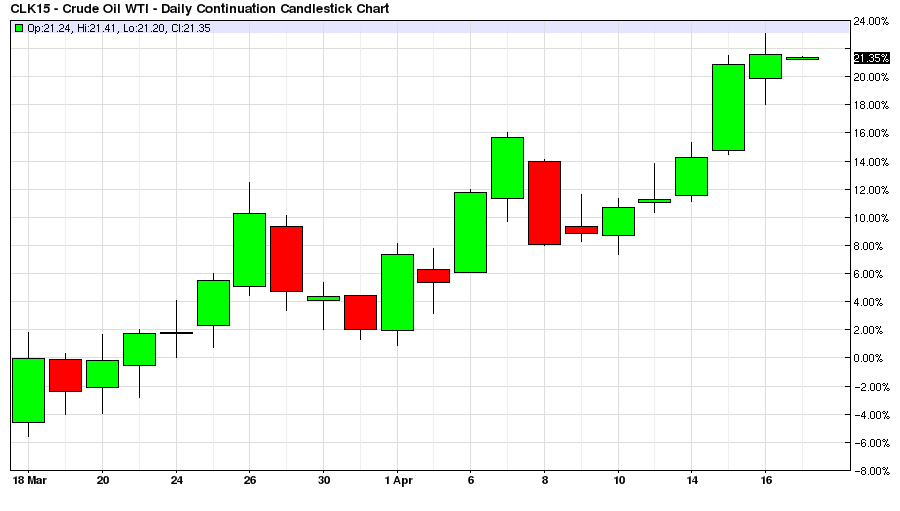 Right around the April WTI Futures expiration last month in March some players decided they were going to make at least $15 dollars a barrel in Oil, that’s $15,000 per contract, consider WTI routinely trades 400,000 contracts on a daily basis, and you get the picture. This isn’t about oil fundamentals, the electronic oil markets are about one thing making money. And these players deemed they could make more money moving oil up than down in the given time frame. The fundamentals actually deteriorated in the oil storage metrics, Global Production remained at record levels, and China printed a (cough, cough) 7% GDP number.

This is part of why oil will stay lower for longer because oil speculators will always keep prices above the fundamentals, this is how we got into the supply glut problem in the first place. Every time there is some slight Middle East disturbance which never affects actual overall supply in the market, or traders are pushing oil up along with equities, or some pipeline needs to be repaired, or the dollar is weak, or the Federal Reserve provides more stimulus, or Goldman puts out a bullish report on oil; prices ramp like no tomorrow. Even though none of these people actually use the commodity, they don’t ever take delivery, they just borrow using carry trades and click some buttons with the goal of making money like a Professional Gambler; all the time being completely divorced from the fundamentals of supply and demand in the marketplace!

US Producers Hang On

So every time speculators push the price up in oil, the producers can just go and hedge future production along the curve, and stay in business another year producing as much as they possibly can crank out into the market. Unfortunately for the OPEC players, getting rid of US Production isn’t as easy as they thought! These small producers just issue more shares, raise cash to fund their debt obligations, wait for an artificial speculative ramp in oil prices, and hedge some more production on the forward curve. Shoot reduce some overhead and costs, renegotiate some contracts, improve drilling efficiencies and there is no telling how long these small Producers can hang in there! This is why speculation in a long-oriented market which oil is by nature because of the synergistic ties to equities, financial markets in general, and oil being a needed commodity will always price ahead of the fundamentals.

The Oil Market should be a “Deliverable Market”

If the oil market was a deliverable market, supply and demand with regard to price in the futures market would be much more aligned, and this oil glut would never have occurred to this degree of market imbalance in the first place. Until price gets to a point and stays at a point for a significant length of time to put producers out of business altogether there will remain a supply and demand imbalance in the oil markets. I am afraid $60 oil isn’t low enough to put any large dent in the global production supply of oil coming to market, if anything it is bringing more supply to market as producers hang on by producing more oil to help mitigate lower prices. Producers need to be put out of business, and I am not just talking about US Shale producers. OPEC, Russia and the Global Oil supply chain got fat and happy on the BRIC Super growth cycle and $100 a barrel oil for a decade. The world just doesn’t need that much oil, China has run up against infrastructure constraints, real-estate bubbles, pollution problems and the law of large numbers – they are no longer building the equivalent of an entire small city every month.

I imagine we will experience spikes in the oil market with lower highs until equilibrium between supply and demand becomes more balanced, but we are nowhere near there yet, speculators are just doing what they do today in the era of modern electronic markets. By my analysis prices have been well above the fundamentals of supply and demand since 2008 and the financial crisis, that’s 7 long years of a poorly priced asset compared with the underlying fundamentals of the commodity. Six months of lower prices isn’t going to fix the market imbalances, and the longer speculators push up the prices of oil on the latest headline, or players want to take a $15 a barrel piece out of the market and add it to their returns, this just prolongs the inevitable. The oil market remains an over supplied market.

The five year averages for oil stored just in the US alone have been rising for over a decade, we have almost doubled our amount of oil stored. For example, in February of 2003 we had 270 million barrels in storage; today we have almost 500 million barrels in storage facilities not counting the Strategic Petroleum Reserves. Furthermore, prices were $33 a barrel in February 2003, welcome to the wonderful world of electronic markets. Accordingly in 12 years we have added 214 million barrels to storage facilities, and even after the 50% plus reduction in oil prices, the price of oil is still $24 a barrel higher today! 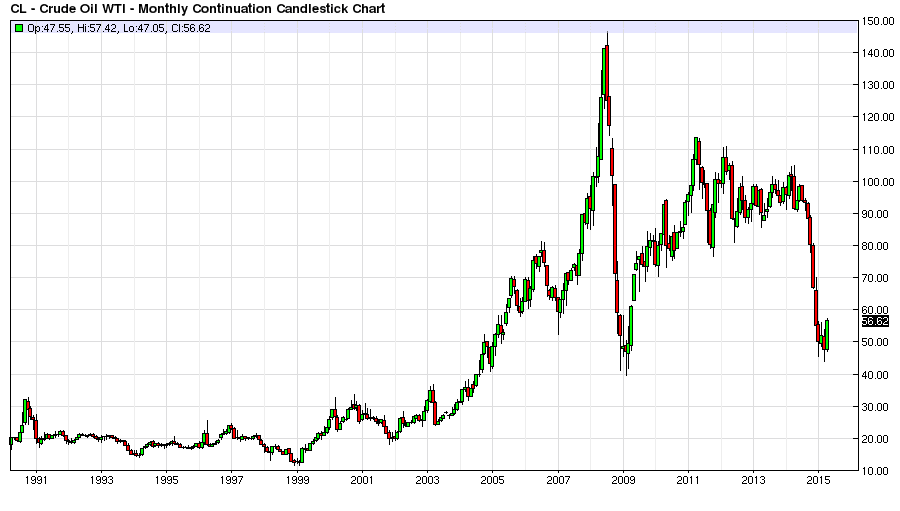 Efficient Market Hypothesis is a joke

Financial markets really have become complete mockeries of their intended and original purpose. Remember the original goal of the commodities futures market in the days of farmers hedging future production? They are so easily mispriced, and like the oil market can stay poorly priced for over a decade before the market fundamentals force the hand of speculators to adjust money flows. Speculators in the oil market are part of the reason the market is so poorly balanced today, and as long as 99.9% of all oil futures contracts never have to commit to actually taking delivery of the physical commodity, this market imbalance will remain for some time.

Explainer: The Models that Help Us Predict Climate Change