Over the past few weeks, the team at Utility Forecaster has written a series of articles focusing on the debate over whether it’s time for investors to turn away from utilities.

With the Federal Reserve poised to hike rates as the economy continues to improve, the conventional wisdom is that utilities will fall out of favor with income investors as yields on Treasuries start to rise.

But as my colleague David Dittman has shown, utilities are still capable of outperforming the market even in a rising-rate environment.

Meanwhile, I’ve written about some economists’ concerns that the global recovery is being held back by disturbing deflationary trends. If underlying deflation continues to weigh on the global economy, then utility stocks’ safe-haven status should keep them in strong demand.

And while markets don’t always march in lockstep with economies, there’s growing evidence that another market shock could soon be in our future. If that ends up happening, then utilities would be obvious beneficiaries of the resulting flight to safety.

The latest brick in the market’s proverbial wall of worry comes courtesy of a recent report published by the U.S. Treasury’s Office of Financial Research (OFR).

In the report, entitled “Quicksilver Markets,” the author argues that by various measures the markets appear overvalued and due for a sharp correction.

“Although no one can predict the timing of market shocks, we can identify periods when asset prices appear abnormally high”.

The OFR, which was established as a sort of early-warning system to gauge risks to the country’s financial stability, is concerned that some market valuation metrics are nearing extreme highs.

Indeed, the market’s current bull run has already outlasted the average bull market by 15 months. And price gains have exceeded the average by 46 percentage points.

The Current Bull Market Has Advanced Further Than the Average 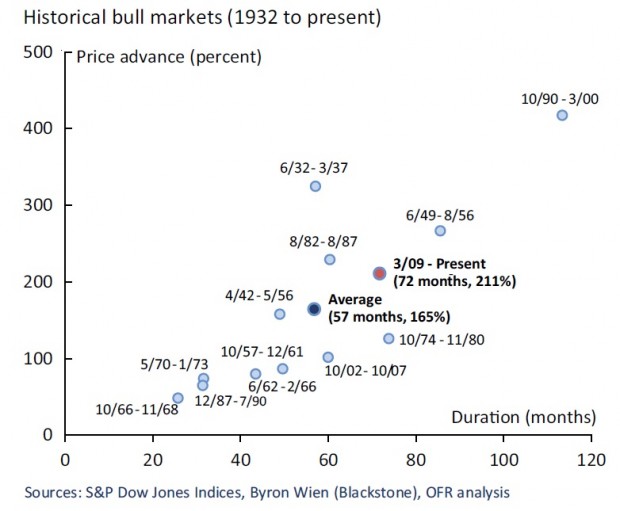 Of course, as the report concedes, the market can persist in this manner for some time. After all, longtime market watchers will recall that Alan Greenspan famously chastised investors for their “irrational exuberance” in late 1996, but it took another three-plus years for the bull market to finally peak.

While some have argued that historically low interest rates justify the market having a higher price-to-earnings ratio (P/E) than its long-term average, the agency notes that a period of low interest rates resulting from a weak economy could portend a lower long-term growth rate for corporate earnings.

Though an eventual rate hike will be predicated on further improvement in economic data, and that should, therefore, be bullish for stocks, there’s also a possibility that in a rising-rate cycle interest rates could behave in an unexpected and dramatic manner, which would adversely affect stock prices.

But it’s not the market’s forward P/E that the report’s author finds alarming. While that metric is above its historical average, it’s not anywhere near the extremes of alternative valuation metrics such as the cyclically adjusted P/E ratio (CAPE), the Q-ratio, and the Buffett Indicator.

What constitutes an extreme reading for these metrics? The report defines an extreme level as two standard deviations (or two sigma) above the historical average.

That may sound hopelessly arcane to the average investor, but here’s why it matters: The OFR notes that valuations approached or surpassed two sigma in each major stock market bubble of the past century before they burst.

Here’s an overview of the OFR’s take on the latest readings from the three aforementioned alternative valuation metrics:

The historical CAPE average is approximately 17 times, and its two-standard-deviation upper band is 30 times. That’s based on 133 years’ worth of market data.

Each of these peaks was followed by a sharp decline in stock prices and adverse consequences for the real economy.

At the end of 2014, the CAPE ratio, at 27 times, was in the 94th percentile of historical observations and was approaching its two-sigma threshold.

Instead of using a traditional account­ing-based (historical cost) measure of net worth, the Q-ratio incorporates market value and replacement cost estimates.

The Q-ratio also includes a much broader universe of nonfinancial companies (private and public) than CAPE.

At the end of the third quarter of 2014, the Q-ratio was within shouting distance of the two-sigma level.

The Buffett Indicator, which is the colloquial term for the ratio of corporate market value to gross national product (GNP), is at its highest level since 2000 and approaching the two-sigma threshold.

Historically, this indicator has proved useful in identifying periods of extreme valuation, such as before the dot-com bubble burst and during the period leading up to the Great Recession.

At the end of the third quarter of 2014, this indicator was nearing the two-sigma mark.

Clearly, this analysis makes a strong case for why markets might not only be overvalued, but possibly headed for a correction.

But the government acknowledges that no metric is perfect, as changes in accounting standards, corporate-taxation policies, and approaches to inflation measurement can complicate analysis, especially when it’s applied to data gathered over the long term.

Beyond that, extreme valuations alone are not sufficient to trigger a downturn, but should be viewed within the context of corporate profitability. The current cycle can continue as long as revenue growth offsets margin pressures.

While Uncle Sam can’t predict when “quicksilver markets” will turn from tranquil to turbulent, we believe utilities are still the best place to be for income investors in this uncertain environment.

08Apr2015 Market Update: Averages Still In The Green, But Trending Down Off Morning Highs, Oils Mostly Trading Sideways And The U.S. Dollar Is Trending Upwards Ahead Of The FMOC Minutes

08Apr2015 Market Update: Averages Still In The Green, But Trending Down Off Morning Highs, Oils Mostly Trading Sideways And The U.S. Dollar Is Trending Upwards Ahead Of The FMOC Minutes