Thoughts on The Current Oil Market

Crude oil has slid into a definitive bear market starting 2H14. Since most of the oil companies (majors as well as E&Ps) based their budget, growth, and strategy trajectory on ~$50 oil price scenario even for the most conservative, the current ~ $46 WTI price environment has created a crisis situation for many oil and gas producers.

The immediate oil industry response has been reflected abundantly in rig count. Oil rig count has dropped drastically particularly in the high-cost basins such as Permian in W. Texas / New Mexico and problematic transport regions such as land-locked Bakken in N. Dakota /Montana. For example, according to the latest Baker Hughes data, the number of rigs in the once red-hot Bakken fell to double-digit levels for the first time in at least four years, down 50% from the most-recent high in October, 2014. Likewise, oil rigs drilling the Permian Basin also plunged ~50% from November, 2014. 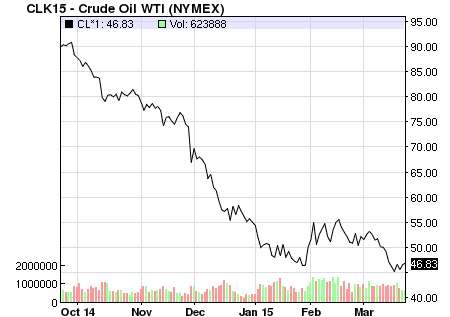 We probably already learned the main contributors to the steep drop in oil prices include stagnant demand & global economy, rising production (and oil inventories) from U.S. Shale, and a strong dollar depressing all commodities priced in dollar. I personally believe these macro-economic factors are unlikely to change that much as to lift oil out of the bear market in the next 12 months. Nevertheless, I’m going to discuss my views on some other popular oil-market related topics.

To illustrate, Taiwan’s news media reported that in late 2014, Saudi sent a group of delegates courting one of the two refineries/petrochem plants in Taiwan which was the first ever in over 40 years. According to EIA, Taiwan oil consumption is ~ 1 million barrels a day in 2013, which explains why Saudi never sent delegates visiting such a small client before. This only demonstrated how Saudi is hunkering down to secure every bit of its market share.

In addition, Saudi would never want to repeat the history of cutting production, propping up oil prices just to give rise to Canadian Oil sands, Russia and U.S. Shale. Another psychological factor, if Saudi has hung in this long watching oil falling from $100 to $50, a production cut at this stage would only show weakness by the Kingdom to deviate from initial resolve. Remember, Saudi is one oil producing country seen $10 oil before (as opposed to U.S. Shale Industry’s total shock by $50 oil).

Wells Drilled but Not Completed

Wells that operators do not want to produce at current low oil prices. Well backlogs have sparked some concern that holding back completions until oil prices rise would simply cause a production surge in the future, leading to another oil price plunge. For example, Platts reported EOG Resources (EOG) sees a backlog of about 350 wells this year and Anadarko (APC) says 125 wells. Continental Resources (CLR) said it had deferred completions in the Bakken by 25% in Q1, while Chesapeake (CHK) will have about 100 wells in its Eagle Ford Shale inventory.

Unlike rig count, well backlog is not a statistic tracked by anyone on a regular basis. Platts cited estimates of 1,400-2,000 ‘fracklog’ wells in the U.S. However, I think this ‘fracklog’ seems more like a ‘spin’ by E&Ps (and Wall Street) to frame a better story for capex and/or production cuts of 2015+ rather than something of a material impact.

A lot of small and mid E&Ps typically cannot afford to remain so ‘strategic’ as they need cash just to stay afloat to fund operations and interest expense (See ‘E&P Funding Crisis’ section below). Furthermore, the steep decline production curve, a characteristic of oil Shale, suggests the production impact from these wells most likely would not be significant and long enough as to bring about another oil bear market once oil prices recover.

The long good days of $100 oil have spoiled many E&Ps into reckless spending and leverage. Oil falling to 6-year low has put some E&Ps in jeopardy. Reuters is reporting that JPMorgan has been shopping the entire Whiting Petroleum (WLL), the biggest oil producer in Bakken, to potential buyers but they’re scared off by $5.6 billion in debt. Whiting piled up debt after the acquisition of Kodiak Oil & Gas last year. Quicksilver Resources, a natural-gas-weighted producer, filed Chapter 11 on March 17 following Dune Energy and BPZ Resources.

I think this ‘funding crisis’ is individual-company based instead of an industry wide tsunami. There are 100+ publicly traded mid to small E&Ps and E&P MLPs in North America. Many risky and high levered companies were able to hide under the high oil price in the past. This time around, the higher break-even point of Shale Oil dictates only the strong will survive. So now is the time for some industry consolidation to weed out ‘sour apples’. In the end, bigger, smarter and healthier companies will remain, which is a good thing for investors and the U.S. energy industry as a whole in the long run.

A couple of weeks ago, CNBC had a segment talking about earnings per share vs. dividend per share and concluded that some of the bigger oil companies such as Hess (HES), ConocoPhillips (COP), and BP may need to cut dividend as earnings fall short of dividend. ExxonMobil (XOM) name was also verbally discussed in this particular CNBC segment.

Frankly, I think it is plausible Hess, ConocoPhillips and BP cutting dividend due to lower oil prices & revenue; however, XOM has never ever cut dividend since the stock was $5, so I doubt the oil major would break tradition this time. After all, XOM is sitting on $4.7 Bn cash and $53 Bn in Current Assets (as of 12/31/2014) . In fact, I see XOM stock more a dividend play rather than energy, so I don’t quite get Buffett’s rationale of dumping all of his XOM holdings while still keeping IBM.

Merit of The Integrated Model

Oil price plunge has also brought about the age-old debate over oil majors such as ExxonMobil (XOM) and Chevron (CVX) keeping the integrated model (Upstream + Downstream) instead of spinning off the refining business like Marathon (MRO) and ConocoPhillips (COP) did.

Sure, when oil prices are high, upstream (exploration & production) makes all the money while downstream (i.e. refining & marketing) drags. But nothing lasts forever, when oil prices gone bust (like now), downstream actually serves as a natural hedge for the Upstream arm of the integrated model. This is one reason integrates like XOM and CVX should fare better in the current oil price environment than E&Ps, and why hedging position/strategy is far more important for the pure E&Ps.

As I indicated before, shifting away from the integrated model is a short-sighted move blinded by Wall Street talk of ‘unlocking shareholder value’ (banks get hefty fees and shares in a spin-off IPO). Marathon and ConocoPhillips would certainly be a lot better off if they still have the steady cashflow from their old refining business to fall back on.

These are the Top Issues facing Britain

What We Still Don't Know About the Fed's Leak Investigation