I have been involved in a long series of discussions on Seeking Alpha as to 1) whether or not there is such a thing as a Business Cycle; and 2) what is the true definition of a Bull Market and a Bear Market.

Here is a simplified version of this for the recent century: 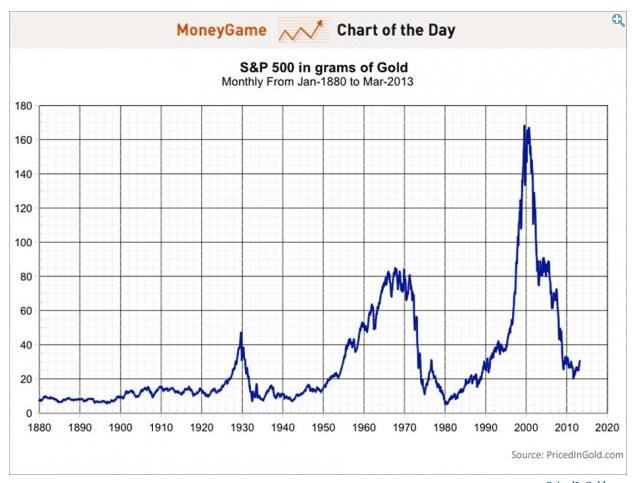 Business Cycles and Bull Markets run from 1911-1929, from 1947-1965, from 1983-2001. How could anything so complex as the Business Cycle and the Bull Market be so simple? Good question. It just is. There is no need to rationalize it. Our modern scientific prejudice is that everything needs to be rationalized, explained rationally, broken down into rational parts, thus, convincing us that we have power over it, making us thereby larger than it is, a god ruling over Nature. But that is just our modern fetish; this says nothing about Nature or Reality. Mind over matter apparently is not just a mystical notion, but is a very practical scientific application as well.

“God geometrizes.” He also wrote: “The Laws of Nature are the thoughts of God.”

“Geometry is one and eternal shining in the mind of God. That share in it accorded to humans is one of the reasons that humanity is the image of God.”

Simplicity within complexity. Complexity within simplicity.

Some humans will reject simplicity because it is not complex enough, not intellectual enough.

“Simplicity boils down to two steps: identify the essential; eliminate the rest.”

“Simplicity is the ultimate sophistication.” And again: “If you can’t explain it to a six-year-old, then you don’t understand it yourself.”

I know there will be scoffers who will reject this apparent proof because it is not sophisticated enough, not complex enough, too mystical, too exact. “The Business Cycle is defined exactly like an alarm clock going off,” they will mock. Yes. Time is the form that Space takes in manifestation.

I do have more involved arguments as to why 36 years. But I grow weary of explaining it to those who feel it their duty to de-bunk rather than their privilege to receive such revelations. So I will write these more elaborate notes at some other time.

2001-2019 Bear Market = DJIA return:still to be determined. (I have written much about central bank attempts to distort the Business Cycle by stealing money from the future to spend today — which I believe will result in a prolonged disaster — and a horrible crash of the financial system. I am predicting a crash in the DJIA to around 8787 by 2019, a loss of more than 50% from where we are today. Time will tell if this occurs.)

When we sleep, the material world is destroyed to us; our identity is totally lost. When we awaken, the anti-material world of our dreams is destroyed to us also. It is not really clear which world is the real world, as both are real in their own context. The spiritual world of our dreams feeds us imagery that we construction in matter when we awaken and carry those dreams into the waking world, the Bull Market. We should learn to treat the Bear Market sleeping world with as much respect and honor as we treat the Bull Market world of activity. Without the Bear Market Night-Cycle of rest and recovery there would be no Bull Market of evolutionary change. The Bear Market rest and recovery period is about refocusing and the conservation of energy we have spent during the Bull Market Day-Cycle. (Note: Day-Cycles are about expending energy, so the Bull Market Business Cycle can also be called the SPENDING CYCLE. Night-Cycles are about the conservation of energy, the saving of energy, the storing of energy for emergencies: Night-Cycles can also be called the SAVING CYCLE. Interest rates should be lowered in support of the Spending Cycle and raised in support of the Saving Cycle. Simple, again; but true.)

Tricks to extend the Business Cycle, and the Bull Market, the Day, are, in fact, stealing energy from ourselves and from our own future. The Business Cycle and the Bull Market cannot be extended beyond the 18 year limit without stealing resources and recovery energy from ourselves. This is a wisdom that Greed battles and tries to destroy. Such Greed also destroys empires, as they steal energy from their own futures, and become weaker during each cycle, eventually collapsing from within because of their desire for MORE NOW, always for MORE NOW.

Please think about this before rejecting it. Scientific thinking (and debunking) is part of the day language of the Bull Market Day-Cycle — but there is also a Night-language, symbols, dreams, metaphor, which will give one extended life during the Night-Cycle. That is why we must develop both sides of the brain, not just the practical, causal, empirical reasoning (and rationalizing) left-brain of the Bull Market Day-Cycle. If we are not balanced, we do not get eternal life.

Nature is precise. Time is the precise side of Nature. Science does not reject the precision of Nature once it learns how to measure (and then perceive) such precision.

Singularity of the Dollar